School 2017 adds more students and a teacher to its lineup 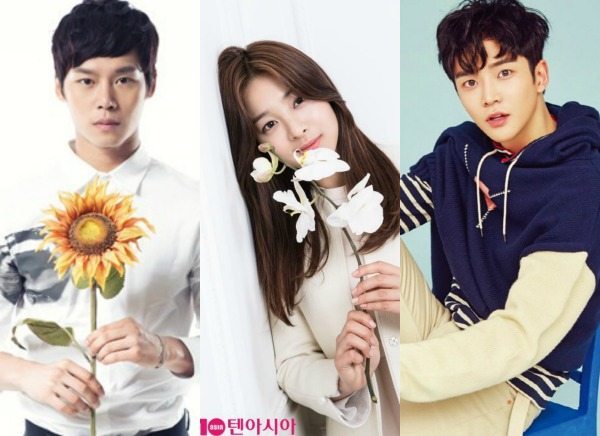 The newest installment in KBS’s School series has added more names to its cast, and the range of acting experience is pretty in keeping with previous entries in the long-running franchise. The most notable addition is Han Joo-wan (Blow Breeze, Hwajeong), who is considering a teacher role, while newbie actress Seol In-ah (Strong Woman Do Bong-soon) and idol group SF9’s Ro-woon are up to play his students.

The role Han Joo-wan will potentially play is a teacher known throughout the school as an “idol” teacher because of his good looks, but in contrast to his popularity, his character is described as painfully weak-hearted. And you chose to be a high school teacher? Yikes. Also, with Han Joo-wan up to play the teacher, that must mean Kim Jung-hyun (Rebel: Thief Who Stole the People) was offered a student role, which I’m completely fine with. He fits that brooding rebel image so well. At present, Han Joo-wan, Ro-woon, and Kim Jung-hyun are all still considering their offers to star in School 2017.

Seol In-ah, on the other hand, has already confirmed her role as a student named Hong Nam-joo, a character so conscious of her looks that she can’t go long without looking in the mirror. She’ll hold the key to our leads’ fates, which sounds quite dramatic for a show about high school, but what is high school without the drama, I guess. Seol In-ah will join idol group Gugudan’s Kim Se-jung, who has also confirmed her offer for the lead role. I know that Kim Se-jung is considered a risky choice, but I find her pretty adorable in her variety appearances, so I’m hoping her bubbly charm translates to onscreen presence.

School 2017 is scheduled to follow Fight My Way on Mondays and Tuesdays beginning in July.

So the character that originally sejung was cast for is seol in ah's character. I thought she was a little stiff in SWDWS

I agree. She was stiff in SWDBS. But maybe bec there wasn't much character development? She basically just dumped a guy in favor of another. Hopefullu, she'll do better this time.

I don't really know any of these actors/actresses but I'll be looking forward to them. The School Series has been well known at helping new actors/actresses make a breakthrough. After Kim Yoo Jung declined and Gugudan idol Kim Se Jung stepped in, I was getting excited for this new show with new people. Hwaiting!
(Still loves Kim Yoo Jung. How can I not?)

I like school 2013 because of the bromance and the relationship between the students ; hope we get to see another great show .

I hope this show doesn't disappoint, and give us future new stars.

I hope so too

It's following My Way? Tough shoes to fill... but it'll have a good ratings startup.

Oh I hope Rowoon accepts the offer, I am so curious to see how he would fair in the drama. Plus, I mean...he's not bad to look at. But I really hope they get quality actors here. School is always a favorite for me as far as breakout talent.

FNC has already confirmed, he will join the show.

Is the lead male character the one that Kim Jung Hyun has been offered? If so, yay!! He has a lot of potential. He's a good choice imo.

Child actor Kang Chani was in the web drama too. (He was Park Haeyoung's brother in Signal)
https://youtu.be/w9bJKQwewrQ.

Check out this high school drama while waiting for School 2017 to be broadcasted.

I wonder whom among all these kids will become huge in the next few years. This is going to be interesting to follow.

thought that SF9 Chani will be a good choice but actually Ro woon is not bad either. He has the looks and already played in web drama before, so I hope this chance will make him become popular. Can't wait to see the drama

he's already pretty popular with his looks and singing for a rookie. But yeah, he could be use a boost.

He already statred in a web drama together with 3 SF9 members and AOA's mina. I think he can do well.

I just read, Kim Jung Hyun a. k. a Mori has confirmed as male lead with Jang Dong Yoon (Solomon Perjury). So yeay for me. They are rookie actors, with few experiences. If this will be something like School 2013, i think i'll have more interest.

They should use Rowoon Picture with flower too..

Waiting for this hopping i wont be disapointed

Surprisingly, I haven't seen many people refer to Sejung as a risky choice on DB. Most were relatively optimistic in the other news post. Is it different elsewhere?

Well she had a guest appearance on Sound of Your Heart as the annoying neighbor. It was alright. Her character was annoying.

I hope she does well though. She seems like a really hard-working person.

Looks Interesting. I love school dramas right from The Heirs..... so let's see