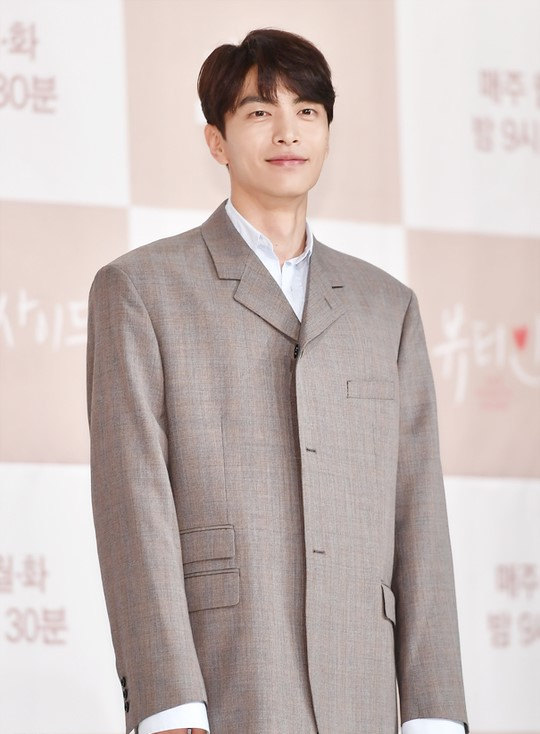 New drama alert! OCN is teaming up with Cheese in the Trap’s PD Lee Yoon-jung to produce a thriller, tentatively called Everyone’s Lie, with an offer out to Lee Min-ki (Beauty Inside) to star in a leading role. The drama sounds like a bit of a genre departure for PD Lee, whose other credits include Heart to Heart, Golden Time, Triple, and dramaland classic Coffee Prince, so it’ll be interesting to see her take on what sounds like a very OCN-like drama.

There hasn’t been many details released regarding the plot of Everyone’s Lie, but what we do have sounds intriguing: The show revolves around a woman whose husband disappears after the sudden death of her father. She starts receiving “pieces” of her husband – which I sincerely hope means something other than body parts – and in order to save him, she becomes a politician. So, this show is definitely not one in a very compact timeline, as is typical in many kidnapping dramas, since she has to run and win an election.

She will team up with a detective to find out the truth, which I’m sure is more complicated than it seems and the show will be full of twists and turns to get there. The role Lee Min-ki is considering is the detective, who is described as having a great gut instinct and a relentless drive. As much as I love Lee Min-ki, I’m more looking forward to watching a thriller with a female character at its core, and I’m excited to learn who will be cast as the woman desperately trying to save her kidnapped husband.

Everyone’s Lie is slated to air sometime on OCN in the latter half of this year.

Tags: Lee Min-ki, The Lies Within

oh this sounds good and i love me some lee minki! i just hope it is not too intense or i will have to watch with my eyes covered. just don't include children in danger---can't watch those... please let it be a good female lead if he signs on! and let the chase begin.

I hope he is partnered with a good female lead!
It'll be great to see Han Hyo-joo or Song Ji-hyo to be cast alongside Min-ki. Or else some experienced actress.

This sounds interesting. I might want to check it out depend on who they'll cast as the female lead. Hopefully a capable actress who needs more appreciation.

I love thrillers and Lee Min-ki. I hope he accepts. I've liked some of the PD's past dramas like Coffee Prince and Triple, so I'm cautiously optimistic for this. As for the lead actress, for some reason the first name that popped into my head was Lee Bo-young. Other than that, I'm not sure. The drama does sound interesting and I'll likely give it a shot when it airs.

Esom! I want Esom as the leading lady. Haha

On one hand, YES. Esom and Min-ki working together yet again is always welcome.

On the other hand, after seeing the "Eternal Summer" MV and their photoshoots, I think any project they do where they don't have a romance is a bit of a waste...

Ahh..i forgot Esom and Minki acted together in BTIOFL 🤣

Breaking my DB ban for 2 seconds... you never saw me! Shhhh!

You guys are lucky that this news is 2 days old and I've had time to process it and I'm not just a fumbling stuttering mess. You actually get some coherence from me.

Min-ki has actually worked with PD Lee Yoon-jung before on Taereung National Village, one of his very very first roles 14 years ago! I haven't seen that drama, but the thought of a director reuniting with an actor who they worked with in their baby acting days over a decade earlier gets me excited. He's matured a lot since then. I know that there was a lot of drama about this PD and her decisions for Cheese in the Trap, but I heard good things about Argon and Coffee Prince is a forever classic, and I'm always open to more projects by female directors in dramaland. There are definitely not enough of them!

I also realized that, surprisingly, I can't recall him ever having played a detective in his 15 years of acting. He's played computer geeks and serial killers and magicians and bodyguards and musicians and spare tires, but never a detective! After he said in an interview last month that he really loves doing rom-coms but that he doesn't want himself or the audience to get bored of him doing the same genre, I had a feeling that whatever he would choose next would be on the darker side. Count me in.

But what makes me even more excited about this is the focus on a female member of the National Assembly, and the fact that SHE is saving her husband--aren't these situations almost always ones in which the wife or the daughter goes missing and hardly ever the other way around? Yep, I'm intrigued. I'm sure whoever they cast for the female lead will be great, as it sounds like this role really requires a strong leading lady. Lee Bo-young is my first vote but given the fact that she just had a baby, I'm thinking that won't happen.

I'll let them reveal the writer (and wait for Min-ki to be confirmed) before getting too excited about this, but I can't help but look forward to it. I hope more information is released soon!

Okay, back to the books for me!

Too late. I already saw you. You have fast fingers to type an essay in 2 seconds 😆

I get praised by my professors for being concise in my essays and reports, but apparently when it comes to talking about dramas, brevity is not my strong suit...

And I saw this article and went "should I tag @mindy or should I respect her hiatus".
Should have known.

Blame my mom and her begging me to go on Facebook to see the cute animal post she tagged me in. I just happened to see the DB Facebook post about this article at the same time.

OKAY I’M LEAVING FORREAL SEE YOU ALL IN A WEEK

Everything I’m reading about this I’m liking. I have faith in this director and LMK’s steely stares will be put to good use I’m sure.

just popping by here for the mention of *Taereung National Village*, in @mindy ‘s comment post above, now I could be one of few who have seen the drama, and I loove that show: Youthful but thoughtful, with sport as the backdrop (the FL is an athlete in archery) and you get Lee Min Ki AND Lee Sun Kyun as male leads, ah how nostalgic..
Thanks for the info on the PD, I wouldn’t know and look forward to the new drama if not because of @Mindy ‘s breaking her hiatus to comment here, haha..

I've got a script, and it's called Everyone's Lice. It's a heartbreaking story about this girl who hides a mesh of dark secrets that she's been keeping for eons in her head, and the guy who untangles them, bit by bit. I've got another script, and it's called My Oily Man. It's about this girl and this guy who keeps slipping out of her reach for some strange reason. I can totally see Lee Min Ki helming the lead in both my stories. I just have to wait for someone to pick up my scripts. I just have to be patient. Wish me luck, beanies. Thanks for reading my post.

I don't mean to egg you on but I don't think you should count your chickens before they hatch.

I can't help being eggscited thinking about LMK. I shell try not to eggspect too much. Everyone's scrambling for fame, I guess, and the hard-boiled ones get to the top faster. I just hope I don't crack under the pressure.

What is this magic and why did we all jump to picturing Lee Bo-young as the female lead? O__O

Though it'd be great if OCN tries something new and casts Kim Seo-hyung as the lead. After that interview where she talks about iconic antagonist roles having a zero, sometimes negative, effect when it comes to getting more projects, I really want dramaland to give her a chance. :( Besides, Everyone's Lie sounds like a remix of SKY Castle's theme song...

it's crazy how true that is. even when we know in any (the west and here) tv/films etc when an actor shows their IMPECCABLE skills for an almost deranged foe the actors have to work harder even though that's definitely the toughest to pull off because you're sliding through so many skins. she's just an incredible woman.

Its true iconic antagonist characters especially female ones tend to suffer from bias when trying to land other roles. I remember Kim Sohyun talking about her struggles with not only future roles but general hate from the audience for basically playing her role perfectly. The girl was only 13-14 but had re-craft her career towards more positive roles. On the other had it served as a great breakout for Nam Goongmin who always played the goody second lead but finally landed lead roles after his downright evil antagonist character. He reinvented himself because of a negative character and suddenly the offers started to flow in better than they used to.

Because This Life is Our First will always be my favorite Lee Min-ki drama, and this sounds like something much different. It is good to stretch and do different things. I hope that this goes well.

i have a question (and please, not from a super fan or anything because i would like the truth and un-biased and non-misogynist understanding) but the accusation for LMK around when he came back--what happened with that / was it true?

but okay if it's about a strong woman in a role i think there would be so many good things to address (which is why the LMK question really stands.) but as an aside i adore heart to heart. lmao

It’s off-topic but this post made me remember the first time I watched Coffee Prince’s behind the scenes.
All I remember is Lee Yoon-jung‘s unique and contagious laughter. I used to laugh by just hearing her voice. Such a cheerful and great director☺️

Ehh. Isn't this PD the one who cut most of PHJ's filmed scenes in Cheese? I haven't seen any of her other work so I can only go by how she screwed up Cheese. I'll wait to see what the verdict is from beanies halfway through before I watch. That is if LMK takes the role.