New character stills and a video teaser have been released for MBC rom-com People With Flaws featuring the lead actors as well as supporting cast.

The story’s main characters are Joo Seo-yeon (Oh Yeon-seo, Hwayugi) and Lee Kang-woo (Ahn Jae-hyun, Beauty Inside), who fall in love despite their misgivings about each other when they first meet. The main point of contention being Oh Yeon-seo’s aversion to men who are pretty or have “flower boy” looks. Which is particularly problematic with Ahn Jae-hyun who is not only pretty, but is also obsessed with being pretty. However, as the two grow closer, they learn to overcome their individual preconceptions and start to build a true, loving relationship.

Interestingly, the reason for Oh Yeon-seo having grief about pretty men is said to be caused by being constantly surrounded by them. And, in the newly released stills, we get a glimpse of five such men. 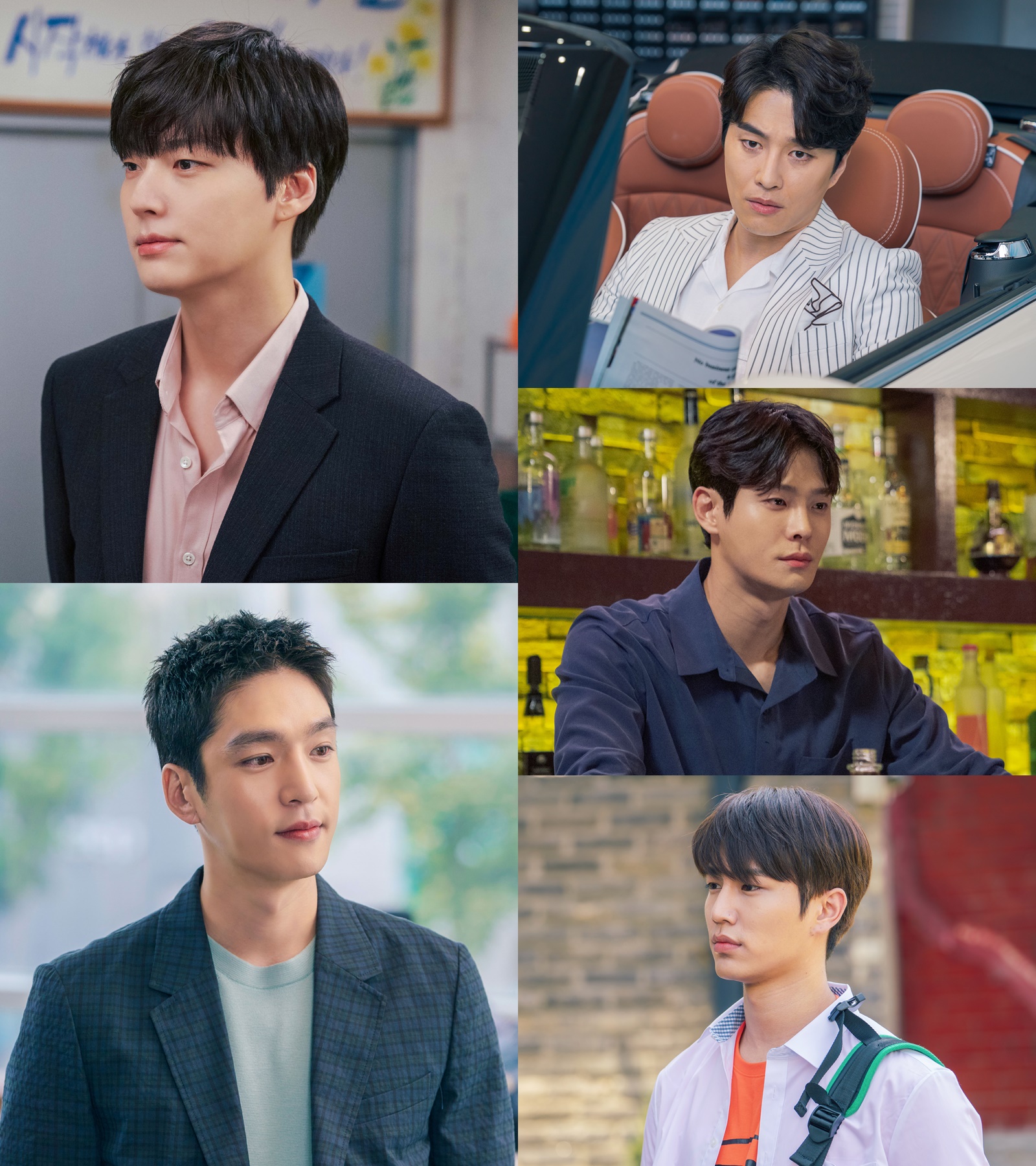 On the right, we have a suited Ahn Jae-hyun at the top. And, below, we see Goo-won (Legal High) playing health teacher Lee Min-hyuk.

The video teaser that was released features the two leading actors playing a children’s game in a field outside. Oh Yeon-seo is “It” and stands at a distance with her back turned. Covering her eyes, she calls out the phrase: “The hibiscus flower has bloomed.” When she turns around, Ahn is supposed to freeze and would normally lose the game if caught moving. But he teases Oh by making heart gestures, winking, and blowing kisses at her. In order to win he just has to tap her when she isn’t looking, but with a sly grin, he tries to hold her hand instead. Annoyed and frustrated, Oh Yeon-seo twists his arm and threatens, “Hey! Don’t push your luck or else I might just twist your wrist right off!” However, just as Ahn Jae-hyun accepts defeat, he doubles over in pain saying, “My stomach hurts again.” Dropping his arm, she complains, “Ugh, you’re so gross.” And he asks her to be his lookout before running off to do his business.

1 park hae jin is the best

can't wait! the teaser is soo good. Hope the drama become a success. coz ahn jaehyun really deserve it.

I will wait for the next teaser before deciding, although i think i will like oh Yeon soo's character, this one reminds of my fav character from her in Please come back, mister.

But i have a serious question, do people really play such games even after graduating from elementary school? If you tell the kids in middle school in my home town to play such games they will think i am mad. I wouldn't even dream of playing it with my friends, it is just so boring and unimaginative! There are far more fun games or just play baseball, you can do the same antics there as well.

You probably wouldn't normally see older children or adults playing that game. Although they do play variations of it on variety shows like Running Man.

I belonged to a group of over 40s who got together on Sat afternoons to play tag, red rover, tag football, frisbee, etc. , and we had a blast. No competition just fun exercise. I moved or I would still be playing. But no, you're right that most people would not be playing as they became adults.

I liked her so much in CBM, I didn’t like her character in her Hong sisters drama (forgot the name) which I dropped after 3 episodes.

Her Please Come Back Mister character is also my fave character from her (and one of my faves in 15 years of kdrama watching).

I think the writer is sort of an evil genius for writing a story that has a heroine with all these goodlooking brothers!

Is that pink field real! So beautiful

Thanks so much for translating what she's saying in the game, I've been wondering what it was since they played it in Goong!

Any idea who has the rights to stream it in the US?

Hmmm... what a strange teaser..

may i know where is the pink muldy location in korea?? feel like wanna visit tht place.. super beautiful!