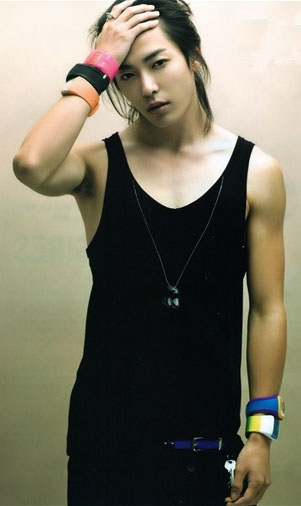 The Dear Cloud music video that Kim Jae Wook, aka Coffee Prince‘s Waffle Sun Ki, had agreed to appear in for free (because the band members are his close friends) has come out, along with the band’s first album. Watch the video below.

The MV is for the main track off the album, “얼음요새” (Ice Fortress), and I’d mentioned earlier that I wasn’t quite sold on the band’s music based on preliminary listens. But now that I’ve had a chance to listen to the album in full, I’d say Dear Cloud is a band to keep an eye on.

The music can be generally described as melodic rock, but it demonstrates a bit more range than that mere term. At times moody and mellow, some of the songs sound similar to indie rock bands Adult Child or Bluedawn, while others have a stronger edge and are more in the vein of Nell or Peterpan Complex.

soothing and interesting at the same time. thanks for sharing! ;D

Both song and MV impressed ME.
The colour combinations seemed to perfectly match up with the melody.

Dammit, why is KJW so pretty?

I liked the colours in the music video. The running shots were so pretty as his clothes just flew in the air, making these waves as he ran.

Ok my first reaction was that I was surprised that there's a band like this in Korea. I was listening hard to see if they're speaking the Japanese language or Korean language because I wouldn't be surprised if this is a Japanese song, they have more variety in their music. I was too exposed to bubblegum pop in Korean music. I rarely see bands in Korea that play their own instruments, much less touch on this style of music. But ofcourse that's because I am speaking as someone who isn't really into digging up the entire Korean music industry just to do my research. I'm not as much of a music fan like you =) I just hear whatever's popular in Korea today.

I hope this band gets popular in Korea. Although I don't really mind bubblegum pop that much but it's nice to have variety too.

Anyway, It's a good song. The MV is ok too. Very expressive. The lead singer is pretty. Ofcourse KJW is pretty too lol.

The fact that Kim Jae Wook is starring in the MV is an ADDED bonus to Dear Cloud's song. Their CD that came out not long ago had a mood that I really enjoyed listening to in Coffee Prince's OST =)

I like the lead singer's voice, somehow it's quite unique. But I especially like how "Waffle guy" looks especially in his suite. lol ^_^

I liked it, probably will take a few watches to understand the video concept but initial reaction; soothing, laid-back feel. Normally not my cup of tea but actually sat through the entire thing and enjoyed it, which for me is a definite plus since most things I don't like get shut off in 5 seconds.

Liked the ending with the wings but I don't really understand my attraction to that particular part of the video. Meh.

forgot to listen to song... oh well, have to play it again...

Not so sure I liked the song, but I liked the masculine edge to her voice, the lead singer that is. I have a feeling that they have a big career ahead of them. Suits today's current musical landscape.

On second listen, its very Goo Goo Dolls Iris, and it sounds great as a simple canon or round. Might be one of those tracks that don't grab you @ first, then worm their way to your favourites later on.

I'd like to say that their album is strongly recommended for those who r interested in krock.. currently its on my continuously playing list ^^ plus the vocals is just awesome!

Liked the song. It reminds me of Goo Goo Dolls or Lifehouse...A bit raw, if you know what I mean.

Also, does anyone have the lyrics in English for this?

i really liked this music and video :-)

Mics, korean music has been gaining a steadily growing range in terms of musical variety. There are many, many great rock bands--punk, soft, alternative, pop, indie--and so many great hip hop artists, as well as techno, electronica, house music bands....just so much, much, more than just the mainstream pop. I love exploring new artists and bands and I come across a new one almost everyday. Its all a matter of trying them out and you'd find an amazing treasure trove of great music in the Korean industry.

I agree they have a good sound, and I like the main singer's voice. Interesting band, definitely some great potential. I think the fact that they roped Jae Wook in for the MV is going to help them quite a bit.

Suddenly had some Nell nostalgia. *must go listen now*

There is a debate on whether the lead singer is a guy or a girl LOL don't even ask me how it came up but then I think its a guy! o.O can someone clear it up for me?

It wouldn't surprise me if all around the world music tastes are widening. Hell, just the other day I saw Passa Passa Japan. That one threw me.

The reason why there's a focus on the wings, I believe is, because of the reference to asexuality in the song. (you'll understand when you see the lyrics)

Its such a sad and yet, beautiful song at the same time. I did a brief translation but the lyrics (and translation) will be kinda long so maybe its better for me to email dramabeans to post it as an edit to her post, if she sees fit to :)

@docmitasha: Hey thanks for the info =) I see news about music award shows in Korea and there's like a bunch of mainstream kpop and a few others who are awarded there. I wonder if there are other award shows that do give awards to bands like this one? I mean as I don't really dig up much on k-music, I am unwillingly presented with all the popular mainstream bands which made me think that k-music is just kpop and nothing else. It'd be really good if I could watch an award show like the ones in the west where there is more variety in genres presented. I also wonder how bands like this survive the industry if someone like me could only here news about kpop bands and nothing else.

I like how the vocal's singing voice is lower. Usually, indie bands I've seen that are fronted by female singers have singers with a higher vocal range (I can only think of Jaurim as an exception, but they're not that active these days as a group). LOL I guess it's a matter of preference thing. I'm glad you also mention indie groups for people new/behind to the scene. It takes energy to learn new groups and stuff, which is the case for me and for which I've lost energy to do, since their kind of music isn't promoted by mainstream Korean music.

Speaking of mainstream Korean music... Gosh, these days I want to punch Kpop; it's way too geared towards high-teen pop. I don't know if this would help diversify mainstream K-music, but they should do a quota thing for different genres that will appear on tv. Then again, maybe this is just a phase of Korean music since there was a time when Korean music was mostly about ballads, which was like "Don't they play anything else?" Although, I find ballads only marginally easier to bear than boy/ girl groups.

@Suzziee: awesome! i'd appreciate it if u and javabeans could post the translated lyrics :) thanx!

Ok, here are my translations, there're far from perfect and honestly, I think I butchered the original meaning. But in anycase, I put the somewhat equivalent meaning in [ ] when I think they're needed

just wondering.
i don't want to offend anyone but, before i watched the video, i thought the singer was a male singer, but after watching, i'm thinking that it's possible that the singer is a female singer with a low voice. I'm pretty sure the singer is a male, but my mind is doubting me...

but the lyrics is very beautiful. paints a nice picture for me. beautiful.

@Suzziee: thanx!! i truly appreciate it! i knew that the song is sad.. but after reading your translation my gosh i love it even more! so thank u again :)

This is amazing! A dream! This is not from our world! Thank you!

wow the singer of the band is female.....i heard this song sometime ago and i really like it. she has one of those voices that u can't tell if it's a female or male vocalist. this band is great and like that they don't sound poppy like some korean rock bands sound. and i am happy that Kim Jae Wook looks more korean now to me. at first when he was in coffee prince i actually thought he was japanese....he is so hot hot(sorry fangirling)hehehehheh. thanks for news on the band.:D

HI! I'm new here. BTW, can anyone give me the lyrics for ice fortress? The one that can be understood by english people, not the translation. I just want to sing with the song. Please?? Thanks!!

Dang, why can't guys in America be as hot as him and all the other attractive guys in the dramas I watch?? it's depressing.
i really like this song. i'm not really sure why, but it's one of those ones i could just listen to over and over and over again and i wouldn't get tired of it. i listened to it last night so it could be stuck in my head while i was at school.

First impression on Jae Wook is that i thought he is a Japanese set to Korea. Hope KJW gets what he's working on...i did see him on Coffee Prince he got guts, hope they expose him more.

I dont know why.....but from the first time that i saw him...i new that he listens to rock.....you can tell it by his attitude!and well im pretty happy...because i love rock too!!!^.^

Just a thought. Mediafire tends to delete stuff pretty quickly, maybe Megaupload is better choice? Almost all the uploads tend to stay active for a loong time. Thing is, MU can be bitchy to non-US citizens. I'm one and I've had problems getting stuff from MU more often than not. Oh oh there's also Rapidshare, which is good.

Whenever I wacth this MV, I always want to hold him O_O

Someone please re-upload the HQ of this MV? Thanks so much :"|

kim jae wook,,
crazy bout you so much
keep existing

Thanks for share the lyric translation. I love this song. The mv also great. Love Kim Jae Wook here.

thanks for the lyrics
they helped a lot