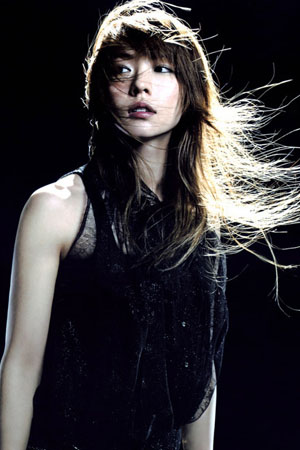 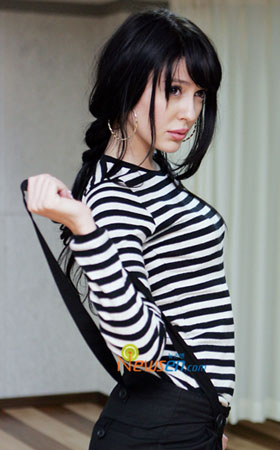 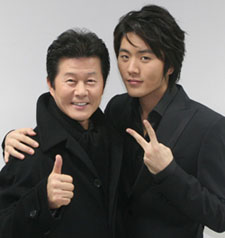 Jamilya – “오빠 미워” (Oppa, I hate you). What an ear-screechingly horrible song. It’s like one of those pop-trance hits of the late ’90s, with none of the kitsch factor. If I clap my hands everybody, just clap my hands, will you stop? On the upside, her Korean’s pretty good. On the downside, her voice isn’t. [ zShare download ]

Eru News *.*
"Ok Kyung-ee" it's my favorite Eru song, i didn't know it was a remake of one of his father's songs.

I know you're posting it up to make a point, but...

Will "Oppa, I hate you" become the next "Tell me"? We can only wait and see, lol.

Jamilya's song isn't HORRIBLE...I mean, the Wonder Girls, Girl Generation, Britney Spears all have similar-ish songs. (Don't kill me, fangirls-or boys, probably, in this case-). *thinks Tell Me* (only that one has got a much more catchy beat. But voices wise is as blah as this)

The only part I can't stand is the beginning....I don't like songs that start with English rap, especially if it's really BAD english rap. But I mean, seriously, the song's beat might not be that catchy, but it does its job. Her voice is horrible, you're right. Monotonous, and no strength, soul, energy, but the music itself makes it up. Cute if bland. It's CUTE. It'll probably do really well on the charts....

Jamilya doesn't really even sing in her song. It's mostly just an easy sticking-with-the-tune. Oh gosh though, the "clap your hands everybody" crap is wretched. This song is going to be in my head now, cries lol.

"On the upside, her Korean’s pretty good. On the downside, her voice isn’t." LOVE it!
I haven't yet listened to it..
but she also looks pretty awful - like scary-like o.O

I saw in a cable channel 2 days ago, that Daniel Henney will play a part in the next sequel of X-men. Do you have any news about it? Is it true?

lordy.. sorry to say.. but what an awful.. terrible.. despicable song.. it reminds me of when i used to despise kpop with a passion.. until my friend became a singer in korea.. it was like a ray of light & gave me hope for korean music.. & now this? it doesn't help that i've never been fond of jamilya.. i think the woman has no shame.. oh well.. at least boa looks really good in her pic.. she looks buff like she's been working out.. it makes me want to find my biceps again someday.. props to her for nabbing #1 on the oricon charts..

geez, at least WG's Tell Me had some sort of cuteness factor to it... "Oppa, I hate you" is just some trance dance music with lackluster vocals.

but then again watch it catch fire and then everyone in Korea will be singing it. goodness.

Jamilya has some Eurasian features. I can't really blame her though for what's she's doing...The Korean entertainment industry wants to make money on her sex appeal and she'd be a fool not to bank on it. Besides, it was the Korean entertainment industry's idea to celebrate the "sexy dance" and turn it into a hot new trend for everyone to follow....which people like Hyori took part in and has been flamed for ever since. Sure, they both could have said "no, I have my self-respect" or "I'm not that talented" but they'd be a fool not bank on it.

Give the people what they want until they are sick of it.....then take a vacation.

.....Boa for the win! and the Dangyunhaji queen looks better with light brown hair, it softens up her features.

Trot is old-fogey pop? Sure it's old, but it's original to Korea and probably the only original type of music to emerge from Korea. Maybe I'm old fashioned but I'd rather take a listen to some of trot's best like Na Hoon Ah, Lee Mi Ja, Joo Hyun Mi, Shim Su Bong, than whatever Korea's music machine is manufacturing and offering for the day.

I commend musicians like Jo PD and Yoon Il Sang who recognize Korea's best like Joo Hyun Mi, even though she's apparently considered old-fogey pop, and are able to infuse old with new to make great music. IMO, PDIS featuring Joo Hyun Mi's "I Love You" should be worthy enough to be a Song of the Day.

Is Kang Ta going to enroll in real military service or cop out and go the easy way out like Kim Jong Guk, Haha, and most other male stars today. Kim Jong Guk, what a rat her turned out to be. I don't know anyone, besides his fans, who believes he took a regular day job over army work because he has "injuries" preventing him from heavy labor, when he's got so much muscle on his body and plays rigorous soccer on the weekends with his celeb buds. What an embarrassment, no one believes you!

Actually Djamilya is no longer on the show and hasn't been for a while. She got kicked off the show when she came out with her sexy photoshoot. That's what bothered me most about her being on the show, besides her disgusting sex kitten act, the fact that she was clearly using the show to get her name out and then ride out into other endeavors. People like Eva and Saori are different, the former already appearing on shows like Star Golden Bell, before Misuda ever existed and stating clearly to the producers of the show of her intentions to go into showbiz, long before Misuda became popular. And Saori was with the show for a long, long time, since the beginning and it just so happened she was likeable, developed a fanbase, and was in demand to appear on shows other than Misuda, which is why she left because the girls on Misuda are under contract with the show and need permission with the producers to appear elsewhere. Anyways, Djamilya should not be given another mention because it would only be a waste of my breath.

i think the guy singing is worst
clap ur hands100xxxx
omggg!!

yeah,the song is forgetful
i kinda like it minus the guy parts
but one two times is ok
more than that,ughh~