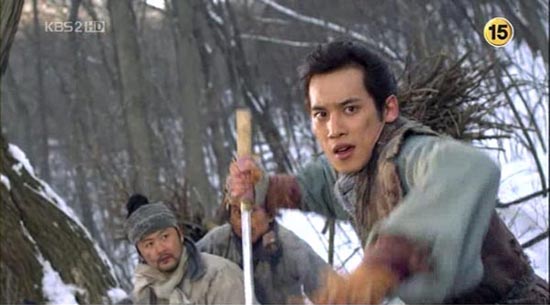 With this week’s episodes, Park Ki-woong joins the cast of Chuno, briefly appearing in Episode 15 before being featured in earnest in Thursday’s Episode 16. (A few more spoilery bits beyond the jump.)

This is Park’s first role in a sageuk; until last year, he was more known for an attention-getting cell phone CF than his acting, until he broke through with a memorable performance in last year’s Story of a Man. In Chuno, he again goes counter to his existing image (who else didn’t recognize him at first glance?) as he leads the gang of slaves.

In Wednesday’s Episode 15, Park shows up for a brief but important moment as he saves the nobleman-hunting Up-bok (Gong Hyung-jin) from death. Starting in Episode 16, he joins Up-bok and Keut-bong (Jo Hee-bong) in the gang devoted to liberating slaves and is called “savior” by the other slaves whom he helps. His character is young and born a slave, yet is well-mannered and educated, on top of being skilled in martial arts.

Park said of his role, “Because I’m joining a hit drama midway through, I feel both pressure and excitement at the same time. This is my first time acting in a sageuk, but I’m working hard to express this character well. Please keep watching.”

he looks hot. He was great in SOAM. I love that drama

I almost whiplashed myself when he showed up and had to pause and rewind to make sure it was him. TOTALLY unexpected but ABSOLUTELY a treat to have him join the cast.

Sniff, sniff, kinda makes up for some dearly departed. I adore PKW, he's so quirky and jumps from role to role. He was completely random in ILPK, like I don't know what he was doing in that drama, but hey, more PKW for me!

Loved him in SOAM! When I saw him in Ep 15 I just thought he looked familiar then it clinched that it was the adorable weird guy in SOAM. Loved him there and I know I will love him here. CHUNO keeps getting better and better and the cast is matching that . =-)

Wasn't he in Invincible Lee? Didn't he play a warrior in that movie?

Did he jump from Invincible Lee Pyung Kang to this? His character just disappeared from Invincible about mid way through and I was wondering where he went. He wasn't one of the main characters but you were certainly aware of him.

Just can't believe this is the same dorky, cutie pie from When It's At Night. I hope he lands a leading role some time soon.

Sorry to say but his acting is still not so good in Chuno, stiff and smiling all the time !.

I was pleasantly surprised when I saw him in ep. 15. Looking forward to seeing how much more his character gets involved in the story. teehee.

SQUUEEAAALL. love him. no doubt he will pull this one off as well!!

He looks like Orlando in "Lord of the Ring"

I'm ecstatic that he's joining in... but I'm sad as well... I'll leave it as that. Some will know what I mean.

It was completely unexpected! I couldn't recognize him at first but then, what a pleasant surprise! Just another reason to keep watching this awesome drama XD

WOW. I'm really impressed by how he really transforms into his characters.

YAAYYY!!!! more park ki woong doesn't hurt a bit...
whenever he showed up on Invincible Lee Pyung Kang i squee like a teenager, he was so darn cute.. but his story with Pyung Kang's friend didn't go anywhere (or they just didn't show it, idk)... i was watching while wishing he would pop up on the screen (rather than watching the three village men or even that Jarak woman)...
and in chuno he would play as the lead of slave gang??!! Hhmm... interesting...
"His character is young and born a slave, yet is well-mannered and educated, on top of being skilled in martial arts." oh i'm soooo looking forward to see him....

PKW was great in SOAM. Like others, I nearly didn't recognize him in Chuno! Hair off his face and no glasses = total transformation!

Wow, he looks really different, I guess because of the long hair and dirt, but I've usually enjoyed him in dramas so i can't wait to see how he does in Chuno

I just saw the 16 th ep.. (and THEN saw this post).
doesnt he look like some from from the LOTR elf camp...

esp the way he has his hair tied.. (so neat... it can give unnnyun some competition)... or is it the way he carries himself??..

i see no 12 has already made my point.. elf like appearance. although he doesn't look like Orlando...

can someone tell what was the point of infiltrating the noble killing slaves ?