Behind the scenes of Road No. 1 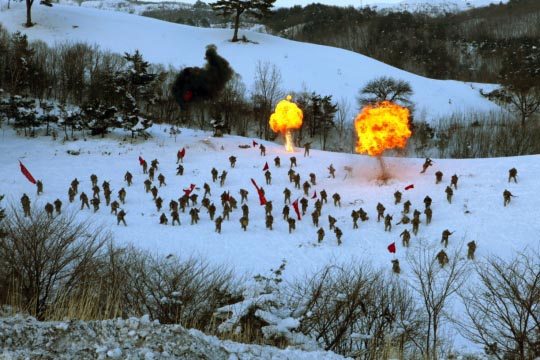 MBC’s Korean War drama Road No. 1 has released behind-the-scenes shots of its large-scale production. The series began filming in January, and has currently shot five episodes’ worth of footage (apparently out of episode order). While the initial set of stills featured the main cast — stars So Ji-sub, Yoon Kye-sang, Kim Haneul — these show one of the largest-scale scenes of the drama, appearing in Episode 14, in which So and Yoon’s squad and U.S. troops are retreating together when they are bombarded by enemy fire.

The drama boasts a budget of 13 billion won and is set amidst the outbreak of the war on June 25, 1950. These scenes were filmed in the extensive plains of Gangwon-do’s Pyeongchang county, and covered 2,000 pyong in terrain (approximately 6,600 square meters, or 1.6 acres). The shoot also incorporated more than 200 extras and the use of dynamite.

Road No. 1 premieres in June.

Hmm,the war drama not interesting me that much, even with high budget and SO JI SUB.. But,maybe I'll check it later, in my spare time..

I wonder how they're going to do with the time constraints...if it's set to start in the summer, they'll have to shoot backwards episode-wise, not to mention wait for snow to clear out before they can do those shots (though I know absolutely nothing about Korean weather, so I can't say if that'll take a long time or if it even snows much at all)... At least they'll have the later episodes (mostly?) done, so it might only be tight near the beginning. That is, unless I'm just completely overestimating the time it takes to shoot footage =]

wow, so exciting. really intrigued by the korean war and all the political and social ramifications since then...
+ YKS.

I love war drama, after watching '1945'. It must be the tough filming for the cast under such grueling weather. I'm looking forward to it.

can't wait for this drama.

I saw this on the news this morning on MBC. They're showing the extras shooting the scenes in the coldmountain of Kangwon-do.

Have to say, the color filtering in the above still is breathtaking in its saturation. The crackling orange hues and splotches of red flags against that aqua hue. Almost looks like Technicolor, vaguely Saving Private Ryan/Band of Brother-ish.

I'm no fan of war drama but SJS, YKS, and these breathtaking shots... perhaps I should give it a go. Just don't be a repeat of Cain & Abel.

i finally get to watch the whole episode of this spectacular drama...

i can't help admire all the cast, staff and crew of this drama.