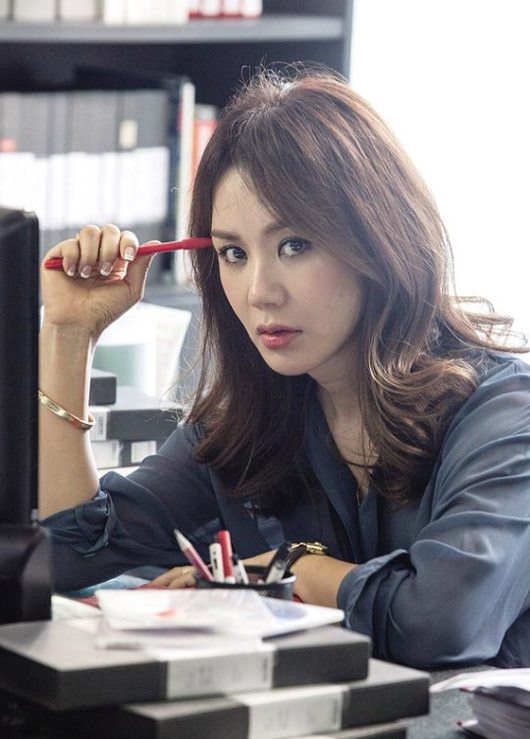 Actress and pop diva Uhm Jung-hwa (Witch’s Romance, Wonderful Nightmare) is gearing up to make a double comeback, with plans for both a new album and a new drama on the horizon. She’s in contention to headline a 50-episode weekend MBC drama, You’re Too Much (working title), which would follow the currently airing drama Blow Breeze; no decisions have been made yet, but her agency confirmed receiving the offer.

It would be a definite change to see her jumping over to the weekend family genre for the first time in 21 years, after appearing in 1996’s Affection Between Father and Son. She’s favored films in recent years, and has opted for a lot of romantic comedies in both the drama and movie realms: sassy workplace noona romance Witch’s Romance, lighthearted remake drama The Man Who Can’t Marry, sex-and-relationships movie Venus Talk, feel-good Dancing Queen, and the classic rom-com Singles.

Perhaps she’s drawn to the idea of changing up her image, having played a number of strong, frank, and forward modern women. In the drama, the lead character is a pop singer who’s been beloved by the public for twenty years, with an elegant and confident outer image that hides her loneliness and pain, after having left behind a young son in order to pursue her career in her early days. She achieved the success she’d sought, but it left a hole in her heart. So while that first part of the description sounds like spot-on obvious casting, it’s the latter that would take her into new acting territory.

I do find Uhm Jung-hwa to sparkle best in comedies, but I can see the draw of going for a more dramatic and emotional role. The story kind of sounds like You’re the Best, Lee Soon-shin told from Lee Mi-sook’s point of view (which, shudder—now that was a narcissistic mother), but I do think Uhm would bring the role warmth and accessibility.

You’re Too Much follows Blow Breeze, which puts its premiere in February 2017.

Tags: Uhm Jung-hwa, You're Too Much

Well the working tittle (you're too much) sounds convincing. But "it" being a 50 ep drama means it won't be recapped by DB right?

They're rare but Six Flying Dragons and You're The Best, Lee Soon-shin were recapped at DB.

DF got the rights to Our Gab Soon (or whatever it is called) no doubt because of the leads. Would have preferred the tailer shop drama but oh well.

Never did I thought she will do long weekend drama again, but if it means I can see her gorgeousness for 50 episodes, why not. If she confirms, can I wish Ji Jin Hee as her partner? And as her son, I wish it will be Song Yoon Ah's son in Mama : Nothing To Fear. (Forgot that boy's name). But maybe they will cast someone a bit older?

i do like the the lead to be him because she and ji jin hee were in the show the man who can't marry together (which i actually liked and seemed to be one of the few who did).

his brother is a whore addict and she wants to do a family drama... god what a family.

Excuse me??? Honestly, did you understand what you wrote? You're judging her for something HER BROTHER did?? For real?? You have got to be kidding!!!

Like really what is wrong with you and your outlook on the world? God, what a brainless person...

They are two completely different person for God's sake.

Jeez, dude! Chill... What's wrong with you, do you have some kind of mutual hatred for her family? Why would she care about her brother's mis-deeds?

There's something really wrong with your thinking mate. And something utterly disgusting too.

I love her acting so far, Witch's Romance and Wonderful Nightmare. So natural even though she has to be extreme and Makjang sometimes. Even senior actresses, not many dare to be all out like her. I see that some people avoid her drama because of her appearance, but once you plunge yourself, she carries the story very well. So... Hwaiting Noona!!!

I liked her also in "Insadong Scandal" with Kim Rae-Won. Her role here sounds good, provided it is well written and gives depth to the character. I wonder who the writer will be. I sort of avoid many long family drama, unless I know the writer is good one. Many of them start of well, and then begin to drag.

MBC should wake up. Their dramas pilot now suck in a hole with makjang, revenge dramas.

Hmmm... -_- I think KBS should be on it too, not sure about SBS though. I've been watching KBS World and continuously seeing the same trailers of their daily makjang drama make me cringe.

I really loved her character in Wonderful nightmare esp. when she, a woman of independence and strength, suddenly finds herself loving her temporary family. Given the drama involves a son, she'll definitely rock the role. Too bad I'm not fond of daily dramas.

omg .. oddly to me aswell I did the exact same thing but I did both Filmography & Kpop! Lol xD

she's just amazing! & I'm so happy for her & her success in Korea!

All I know is when I tried watching Witch's Romance all I could focus on was her fried ends. Never been so upset at the hair department of a drama.

omg Junghwa unnie!!!♥ I can't wait to see your face after a year now from ur last movie wonderful nightmare! :)
~ love you! & hope this 50ep drama plot won't drag ... but knowing your in it I have hope!

Uhmjunghwa!!!!!
your finally back! ... I've been waiting the whole of 2016 for a comeback from you but 1 in both drama & kpop eras next year??? OMG! hell yea, this just couldn't get any better! x
I really hope you do accept this offer bc I really miss seeing you in dramas or movies & by reading the story plot it sounds obviously similar to your life as the Queen of kpop! & also from your 2012 movie "Dancing Queen!!"

I just seriously can't control my fangirl self rn over you & I can't wait for the new year 2017 to come with news this exciting to look forward to! , Wow! what a great way to start a new year!
♥ you Junghwa , all your fans are here to support you no matter what! Love you!!!!! mwah!

Infamous Gu Hye-sun is in talk for this drama too http://media.daum.net/entertain/enews/newsview?newsid=20161222185119174
Most likely will drop this.

Then drop it there are thousands of dramas out there for you to watch. Go indulge yourself in those.

You must be a pathetic Gu fan who thinks she's superb in acting that deserves all the spotlight. Thank you for supporting to drop it, am not watching it - without any hesitation. As a fan, you should try harder to pray hard it does well in ratings and receive positive acting feedback from the Korean audience. She needs it as she failed so badly in blood.

well i for one will watch it for goo hye sun,love her in blood