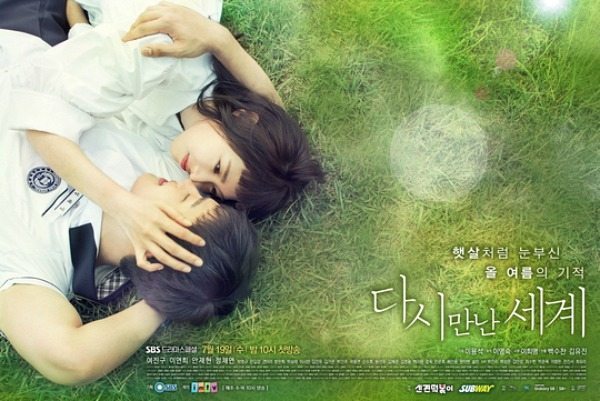 It’s really very late for Reunited Worlds to be releasing promo posters (you premiere tomorrow!), but at least they are pretty to look at and evocative of a light, breezy summer mood.

The four posters all bear the same tagline: “Blinding like the sunlight, this summer’s miracle.” That’s because the “heart-pinching fantasy rom-com” centers around Yeo Jin-gu (Circle) playing a young man who supposedly dies at the age of 19, only to return 12 years later looking exactly as he did while his friends have continued to age into 31-year-old adults. Lee Yeon-hee (Hwajeong) plays his childhood friend and first love, while Ahn Jae-hyun (Cinderella and the Four Knights) will be our hero’s rival as the chef who falls in love with her.

I love this kind of setup, which combines several favorite tropes: a fantasy element that bends/shifts/plays with time, a mystery element regarding how it came to happen, and, of course, the reunited lovers. There’s also a hint of the noona romance, even if it’s not a straight noona setup since they were the same age as children; still, the newfound age gap ought to be an interesting complicator in the setup.

Coming from PD Baek Soo-chan of Girl Who Sees Smells and Beautiful Gong Shim, I expect a bright sense of humor to run throughout the show; I loved the quirky, oddball comedy in both shows, and particularly enjoyed that the latter embraced a feel-good spirit without relying on too much angst or jerky plot twists. Here’s to hoping Reunited Worlds captures that same uplifting tone! I mean, I’m going to watch it regardless, because Yeo Jin-gu (I’m still not over Circle!), but I would like for it to be a pleasant experience in any case. 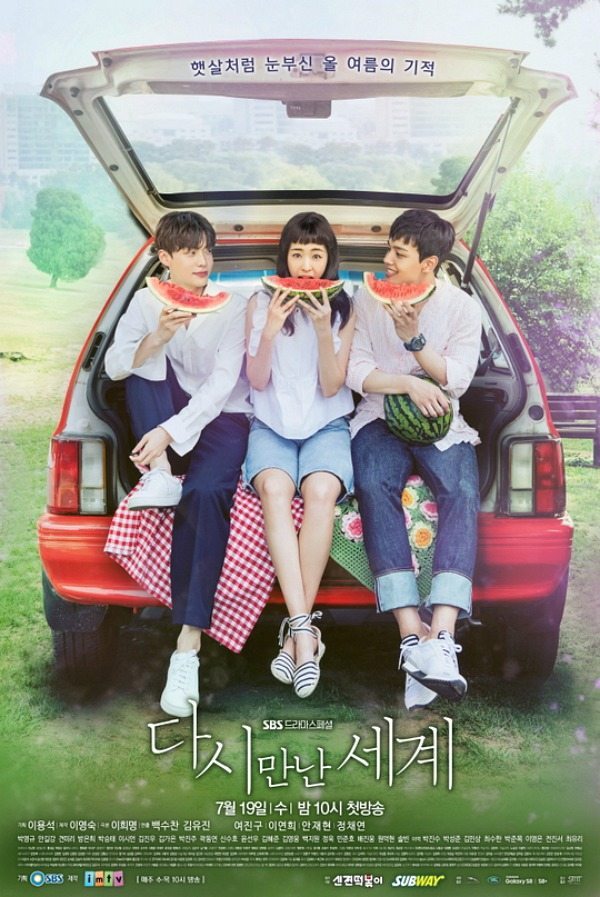 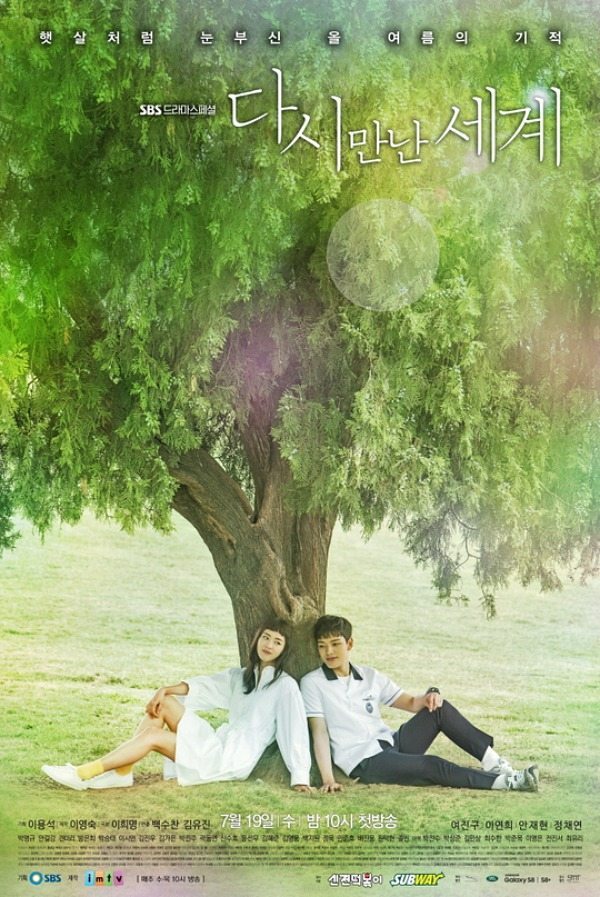 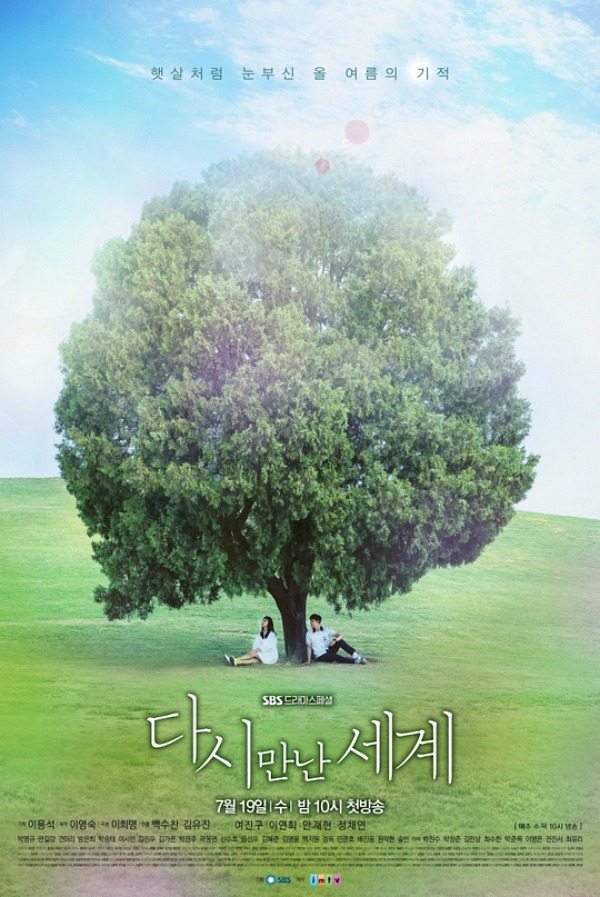 If you watch the trailer you'd figure out that she accidentally cut her hair like that, there is a new trailer for this drama that was out today

I don't have anything else to say except I'm extremely excited for tomorrow!!

SO excited for premiere but NOOOO not dem bangs ...!

It looks like she cut them herself in a fit of rage (over her ex-boyfriend's death duh).

sorry didn't mean to write ex-boyfriend ... does death make boyfriend an ex? I meant boyfriend who was formerly alive. BUT! he has returned a living dead, so, zombie boyfriend?

Will I be craving for watermelon instead of ramyun while watching this drama ? ?

It means a good thing for our diet, right? ?

This a "noona" romance I can get behind. I'm not weirded out because Yeo Jin-gu does not look like her little brother. I feel like I need to keep saying this because of the people who think I hate noona romances. Anyway, I'm excited for this. I like Ahn Jae-hyun and I love Yeo Jin-gu. I've never seen Lee Yeon-hee in anything other than the first few episodes of Gu Family Book so I have no opinion on her.

Who is she in the Gu Family Book?

She is Lee Seung Gi's mother in this drama. I only watched her and Choi Jin Hyuk's part in the beginning of this drama.

Ahh I hated her on that drama like why you gotta break daddy gumiho's heart like that??

The poster and all the promos I've felt the chemistry between the leads--I only struggle with off-age romances when there's an icky chemistry (like in Goblin). And YJG is mature-looking and sounding so I think it will be great.

Excited for this and Criminal Minds the most over the next couple months. I really hope there's a happy ending to this one though.

Aww~
BTW..that hill triggered a fond memory from 1D2N where Kim Joo-hyuk rolled down through the hill wearing a big teddy costume..imposing as the new member instead of YSY! hah!

aww pretty indeed! I have been known to pick up a drama before just cause the posters are pretty, lookin' at you Fated To Love You and Shopping King Louis

The 5 min teaser looks so good. looks like he came back as goblin lol all the super natural powers he has now. Jin goo ah this noona is waiting for first episode T_T

I've seen a couple of synopsis online and there are some that mention a "mysterious disappearance" and of them having aged in different worlds. I'm very much intrigued and will definitely watch this.

P.S. The 5min teaser is great. Loved how bright it is while at the same time evoking a sense of melancholy.

The posters are simple without being overly boring and they all look very nice.

Whoever took that lawnmower to LYH's bangs should be put on trial though.

She did it too herself in anger in the show, you can see it in the promos.

Well at least there's a reasonable explanation and no one's pretending it's for "fashion."

Super Excited for this...

YES. I'm ready. I really hope the drama maintains this pastelly, breezy-pretty vibe throughout. It's so easy on the eyes.

I'm so excited!!! I'm already happy with my Wed & Thurs nowadays because of Seven Day Queen and here is another great recipe to be added on my meal. :D

this one is added to my list since it's taking Suspicious Partner and previous to While you were sleeping (which I'm obviously waiting so badly) so I hope it's not a let down. About the leads I've only seen Ahn Jae-hyun in previous YFAS and C4N and in the latter I enjoyed his character so sad he gets second lead because they don't always get a happy ending.

The new trailer is really exciting. Jin goo has some powers lol. Every time he was the human involved with an alien or a vampire in other dramas, now he got the chance to act the superhuman/angelic part.

These posters are so bright and pretty. I really like the one with the watermelons. :)

Maybe definitely because she's gorgeous but LYH is really working those bangs.

The posters look sooooo dreamy! So excited for this subtle yet heart pinching (maybe it does not qualify to be heart wrenching dramas- ehem ehem SDQ) drama that replaces my Suspicious Partner. Me thinks that it will be those one of a kind dramas since aside from the fantasy, the age gap between the leads is real! I pray that I will enjoy this series...

I can't believe that neither Viki nor Dramafever will carry Reunited Worlds (Into the New World) in English for the USA...does someone know if this will change? Any other channel carry it that goes thru Roku?

Isn't that crazy? I don't get neither of them are..

I'm so excited! I totally liked the 5-minute teaser which introduced the element of Yeo Jingoo not only coming back to life but also having powers. And the ugly bangs is actually part of the story, looks like something got stuck to her hair and she cut her bangs that short by accident. I'm feeling very hopeful about this. Please be good!

I am laughing at the Subway Logo at the bottom of the posters. Also those bangs....

25 bebeswtz❣️Xiao Zhan is the sunshine in human form ☀️

Reminds me of the posters for C-Drama "Rush to the Dead Summer" a.k.a “夏至未至”... Very summer-y, breezy, youthful =)

The bangs are baaack!! It looks nice in the watermelon shot but looks strange in the next shot.

I wonder how long LYH keep her bangs that short. When i cut my bangs its only stay "in shape" for less than a month.
So, if they gonna make her hair like that for a few months i guess she have to cut her hair every week ?