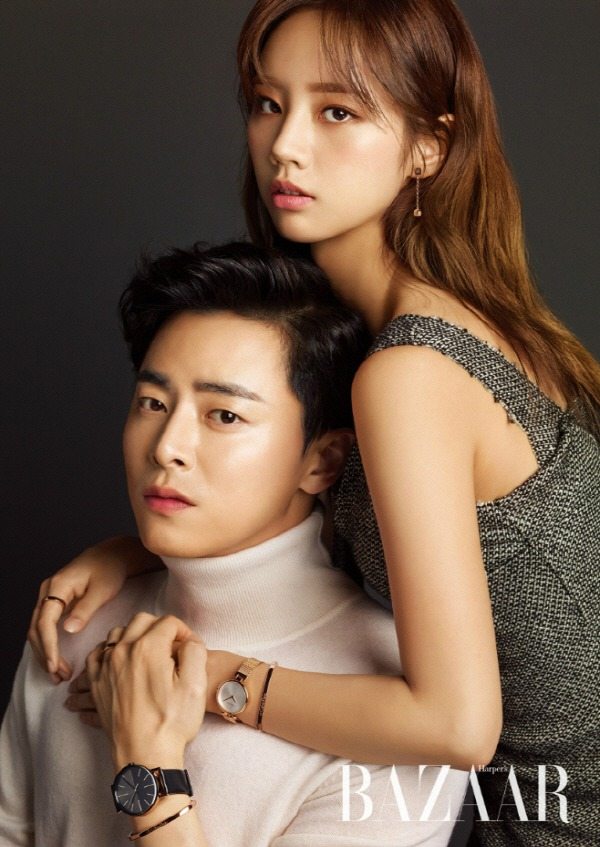 A new teaser and a photo shoot have been released for MBC’s Two Cops, which finally teases a bit of the romance to come in the new body-swap fantasy drama. Jo Jung-seok (Jealousy Incarnate) stars as a righteous cop who gets possessed by the soul of a con man, and Hyeri (Entertainer) plays a prickly reporter he makes enemies with… which of course only means that they’ll bicker and fight until they fall in love.

The two actors posed for a spread in Bazaar, and the drama’s latest teaser finally shows them together onscreen. Jo Jung-seok plays a violent crimes detective who becomes obsessed with a case, during which he crosses paths with a con artist, played by Kim Sun-ho (Strongest Deliveryman), who will later come to “share” his body by possessing him. But then the serious tone of the teaser shifts when he bumps into Hyeri’s broadcast reporter character.

As he swings her smoothly out of the way of an oncoming motorcycle, she says in voiceover, “You’re not a detective—you’re a gangster!” He spits back that words don’t get through to her, and then we see her wrap her leg around him as they sleep. He catches her going undercover as a janitor and growls at her to stay out of his sight from now on. Naturally that’s the last thing she’s going to do.

This kind of gruff role is pretty familiar for Jo Jung-seok, but since he’s at the top of his class when it comes to bickering but lovable drama heroes, the hate-to-love setup might make it easier to buy into this romance. Plus, there’s all that comedy waiting to happen once he’s possessed by a con man and suddenly acting out of character. That’s what we’re really here for, right?

MBC’s Two Cops premieres in less than a week, on November 27. 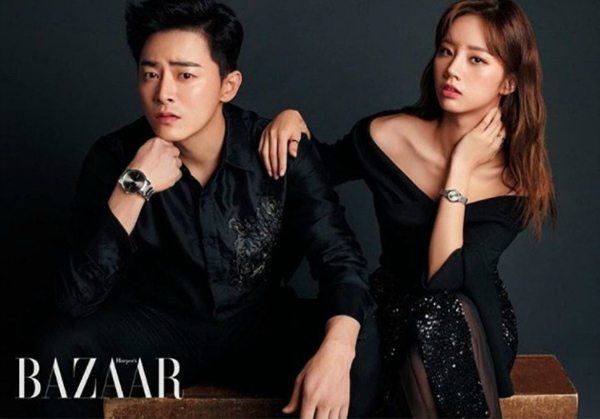 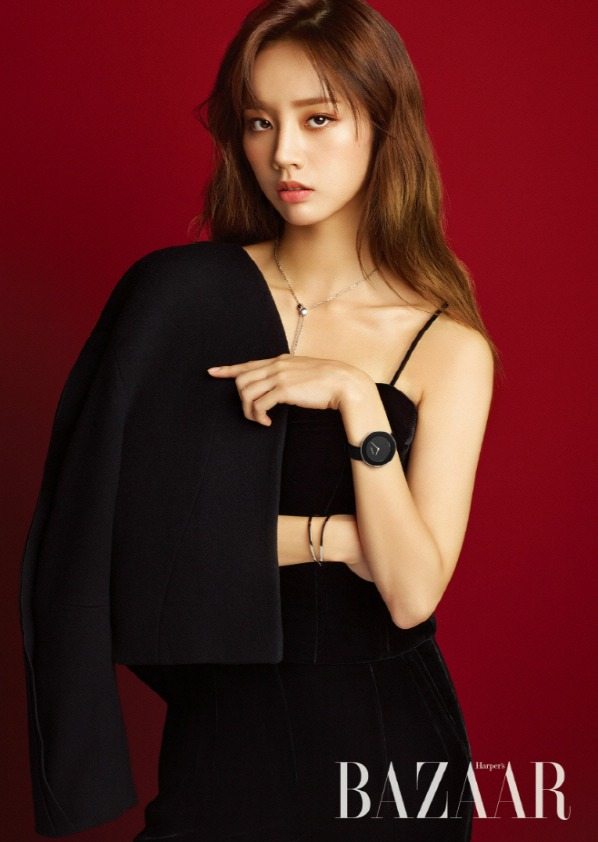 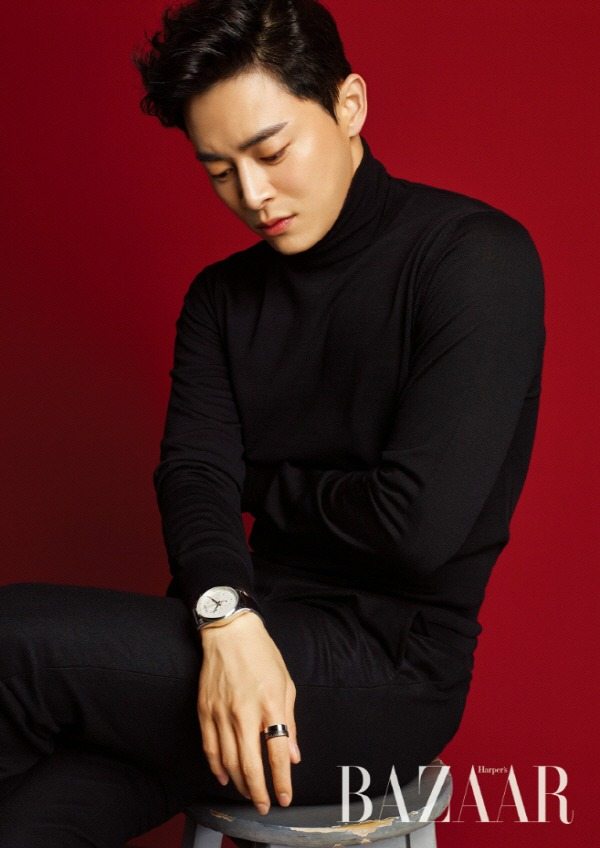 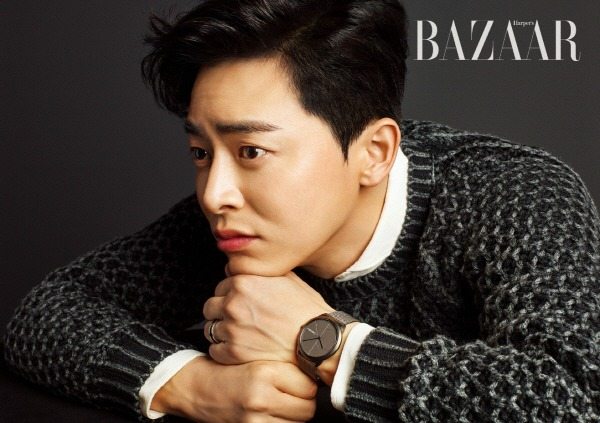 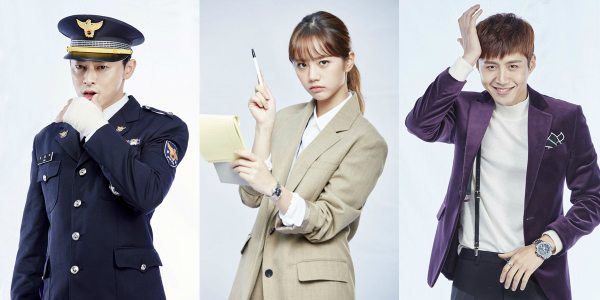 why does this feel perfect for a musical, hmmm.... the costumes and set-up is so musical

Damn, Jo Jung-seok looks so fine in that photoshoot... 😍 And in general too.

Why is my first thought after reading the premise was, oh it's going to be similar to Oh My Ghostess, but this time it's with him getting to play a dual role. And even though the characters (from OMG, and this one) that are possessed are the total opposites of each other, it's another possession story with the same actor.... ....but I'll give it a try since I like JJS. Sorry if this sounded synical. :/

As much as Jo Jung-seok makes me laugh, I hope that they will give enough screentime to Kim Sun-ho too. He was my favorite character in Strongest Deliveryman because his dimples are everything, hee.

IKR, so many body swap drama this year. I don't want kim sun ho to suffer.

So the con artist dies in the drama? Or in a coma? Disappears? What happens while he is possessing the other body?

I don't know why but I really really love hyeri. Maybe deok sun ah is to blame.

I am sad to say I don't like the photoshoot at all. Jo Jung-seok looks bewildered (why, I can't tell), and Hyeri looks so vapid.....😕😕😕

I hope she proves me wrong in the drama and actually can hold her own against other actors. Please pull a Deok-sun. Please, please...

Gonna try to watch this for Jo Jung Seok and Kim Sun Ho. I hope there is a lot of Kim Sun Ho scenes as well ><

The trailer reminds me of some 90's detective thriller themed shows

Ok they are looking GOOD in the spread w o w. The all-black outfits and turtlenecks? N I C E <3

MBC is going all out for this drama! High profile photo shoot, VLive's and so many teasers! Soompi writes one article a day min about Two Cops!

Good Luck to the show!

They talked about the age difference in a different interview, and that makes me wonder if it's because she dated the old idol that she keeps getting paired with older men. They both SAID he looks "young," but that seemed like it's because they know everybody can SEE how young she looks and count how young she is. She looks about 15 in the shot of her staring up at him all wide-eyed. Even if she is an adult. Aesthetics count. And that's not a good look.

I like both of them. He was adorable with his little app in Iceland. I root for all the idol actresses that get harangued for their acting, speaking, breathing, and/or general audacity to exist in some cases. But I couldn't finish her last drama because I couldn't accept even the hint of the romance. Same with Goblin. I couldn't muster the cognitive dissonance needed to accept that it was supposed to be a good thing that a man who looked old enough to have a daughter in her age was romancing a high school student. At best, it's like seeing someone digging in their nose with their finger in public. Even if it ain't a crime, it is worthy of judgement and all the visible disgust that can be mustered. At worst...

I agree. they do not look good together. She's too young for him. I had the same issue with goblin. I did not feel the chemistry between the 2 leads at all. It was almost like the dad and the daughter having incest *shrugs*

Well at least it's not that for hyeri and that guy. Still... a mismatch

This is a mean thing to say, but I'm saying it anyway. I do not think she looks good in the photo shoot pics at all she looks like a mean, angry bird that wants to peck your eye out. Her features all just look really sharp.