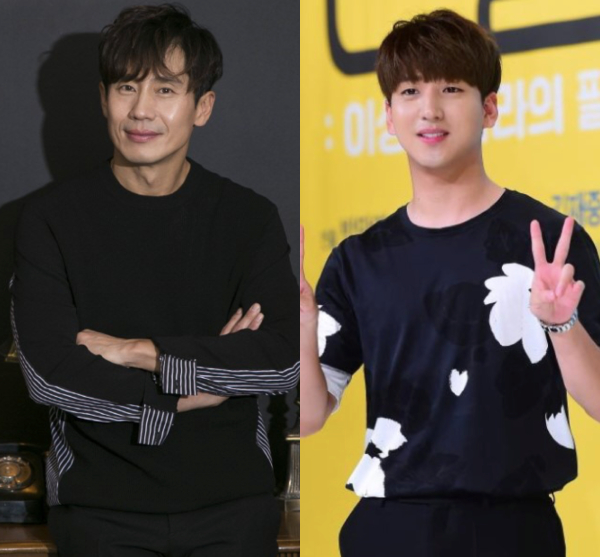 Hmm, I have a feeling this could either go very well or very badly. MBC has announced they will be adapting the BBC drama Luther to premiere later this year, and has cast Shin Ha-kyun (What a Man Wants) in the leading role. Also potentially joining the project is Cha Sun-woo (Manhole), formerly known as Baro, who is now promoting under his birth name since his departure from idol group B1A4.

I caught the first season of the BBC Luther, and it is surprisingly difficult to describe: At a basic level, the show is about the titular detective whose main nemesis in the show is a genius psychopathic murderess. It’s semi-procedural, but the show’s main focus is really on the detective’s wavering morality and his anti-hero qualities. He’s definitely a lone wolf character who prefers it that way, and his interactions with the aforementioned genius psychopath made for almost uncomfortable viewing since she becomes infatuated with him. I actually found Luther in the original rather unlikeable, notwithstanding my love for Idris Elba, so it’ll be interesting to see how much of that will bleed over into the Korean adaptation.

I’m really only familiar with Shin Ha-kyun’s work on the big screen, and he seems like a great character actor from what I’ve seen, so I can see him take a slightly different approach to this character than Idris Elba but make him no less compelling. Shin Ha-kyun’s television credits have been relatively less stellar than his film work, but let’s hope this newest project turns his luck around. The reports haven’t revealed which character Cha Sun-woo is up to play, but I suspect his role might be the Korean counterpart of Justin Ripley, who begins the show as a young, bright-eyed policeman eager to work with a detective of Luther’s caliber, despite the latter’s negative reputation among the force.

I’m a little surprised that the Korean Luther adaptation is going to be airing on MBC, since the show skews quite dark and would’ve been pretty in line with a station like OCN, which coincidentally, is doing a fantastic job with another BBC adaptation, Life on Mars. I guess we’ll just have to see whether MBC can achieve the level of grit a show like Luther needs.

MBC is planning to fit Luther into its Monday-Tuesday slot after Risky Romance and Bad Papa, which should put the show’s premiere sometime in October.

I would have preferred this on cable as well because I’m not sure how dark they can go on a public network. Also I’m excited to see who they cast as Alice Morgan. *fingers crossed it’s someone good*

Whoever it is, still will not hold a candle to Ruth. The perfection of that performance cannot be touched and I am shocked that they are trying.

I 100% agree. Ruth Wilson as Alice Morgan is still in my top 10 performances and top 5 favorite psychopaths. I watch dark TV, lol.

Noooooooo Baro changing his stage name to his birth name..... Please don’t let this be a sign that he’s left B1A4 for good T.....T

Wow I never even knew his real name! Does this then mean that we will only get Cha Sun-Woo the actor and not Baro the rapper?

I remember catching some Luther but I didn't continue with it... And as mentioned, it doesn't seem like a show apt for MBC. OCN or even TvN seem like the better options... But well, let's see what happens..

I've watched the first three seasons of Luther and it's a fantastic series. The first thing that comes to mind is that Luther is a character that requires an actor with intensity. I've watched Shin Ha-kyun in a couple of dramas and he's been fine but with all due respect, I don't know if he can bring the required intensity for this role. Then again, I don't know how much the writer will follow the original series. If they decide to dial down the darkness and grit, things may work out.

Also curious as to who will be cast as the genius psychopathic murderess, Alice Morgan. That's another role that I think is difficult to play convincingly.

I'm in it for it as I've heard all praises about the original series.
I would have loved the drama to be on TVN or OCN.
Shin Ha Kyun and Cha Sun Woo are great actors but I hope they stick to the story coz I'm always feel vary about the remakes. (Criminal minds -_-)

I really liked Luther, and I could see OCN doing an adaptation justice but not MBC, unfortunately.

MBC though? *Insert Conceited reaction gif* Anyway, I hope they get the casting for Alice perfect coz that character was everything.

If MBC manages to replicate even a fraction of OCN's life on mars successful adaptation, i may try to tune in to Luther. The last MBC drama i really enjoyed was marriage contract. But i also watched missing nine (mainly for JKH ☺) which is also an MBC drama, i do think missing nine's first half was quite dark and gritty. Maybe MBC can pull this off.

So.. is Alice going to get the kdrama doe eyes make over now that Luther will be air at MBC?

Nop! You're Not Cha Sun woo!! You'll always be my Daramji Baro ❤️❤️