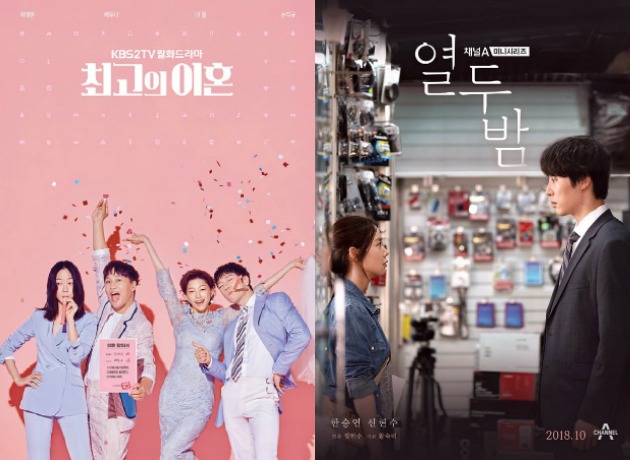 It’s starting to feel like autumn: The leaves are beginning to change colors, the air is a bit crisper, and temperatures are starting to cool down, which leaves me in the mood to hunker down with a few good romantic shows. Luckily, we’ve got two starting this week that just may fit the bill. 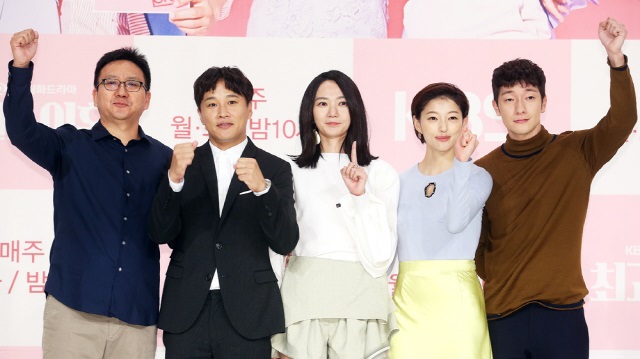 Reasons to watch: In this remake of a 2013 Japanese drama, Cha Tae-hyun and Bae Doo-na play a married couple about to call it quits on their union. I’m intrigued by their casting: Cha, mostly known for his comedic roles, takes on a prickly, rigid persona, while Bae, so serious and badass in Forest of Secrets, is cast as his carefree, easygoing, soon-to-be ex-wife. Lee El plays Cha’s first love, who is married to Sohn Suk-goo, and the show will juxtapose both relationships and examine marriage and divorce in a new light. It sounds like bleaker fare, but based on the news and teasers, the show is indeed a rom-com. The romance may be lacking at first, but the bickering and cohabitation escapades post-divorce set an early comedic tone–I expect plenty of laughs. 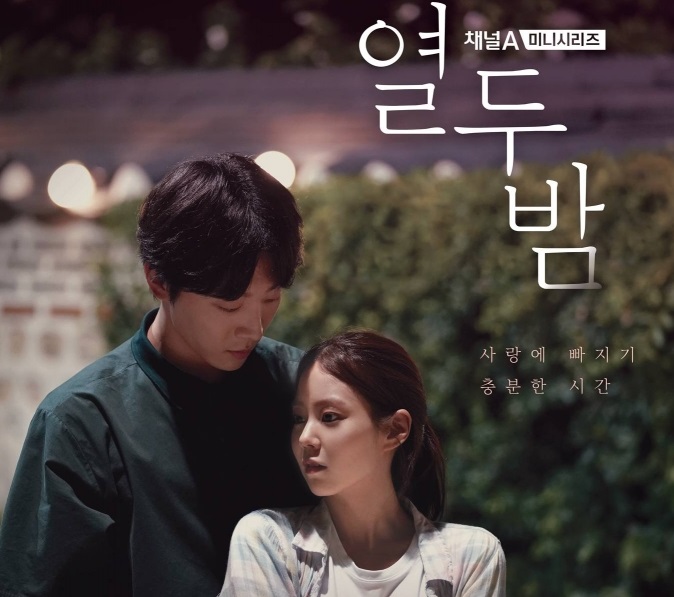 Reasons to watch: Not only does it star Han Seung-yeon and Shin Hyun-soo from Age of Youth, but it also has a sugary sweet premise. Han plays a photographer from New York and Shin a man who throws away his desk job in Tokyo to follow his dreams of becoming a dancer. The two leads meet three times by chance on holiday, once in 2010, once in 2015, and once in the present. They spend a total of twelve nights together and fall in love, and there are a total of twelve episodes to match. There are a lot of question marks (both the writer and director are rookies and this is the first original miniseries from Channel A in some time) but I’m rooting for Twelve Nights to be just as cute as the “making-of” episode makes it out to be.

But then you add on that the source material is written by the scriptwriter of the original Mother... I'm THERE. Give it to me NOW.

Anything with Bae Doona is a must watch for me.

Just to add, Dae Jang Geum Is Watching will also premiere this week, 11 October and will air every Thursday. I'm keeping my interest with this show because it has Shin Dong Wook and I love the idea of this show too. Anyway, I'm interested with both shows above. Twelve Nights has interesting premise, a good sweet cute little drama is always welcome for my plate. Hope Best Divorce can meet with my expectation because I love all four main casts and the premise is also interesting.

It will be great if MBC can ask Lee Young Ae to cameo as Dae Jang Geum herself lol. I remember she did a cameo in My ID is Gangnam Beauty so maybe this is possible, although this is not a primetime show.

I, too am going to keep an eye out for Dae Jang Geum is Watching. Shin Dong Wook, food, romance and 12 episodes, what's not to love?

Glad to see the Shin Dong-wook fangirls turning out for DAE JANG-GEUM IS WATCHING. I've been looking forward to this since it was first reported on DB. ;-)

I was expecting it to air on 10/4. A few days ago I read on Viki that they would be posting subtitles with a one-week delay, if I understood correctly. Kind of like what happened with LIVE on Netflix.

It's on very late on Thursday nights -- practically the graveyard shift, what with two episodes back-to-back -- which is too bad from a ratings standpoint. But I'm just glad SDW has another drama in the works. Hwaiting!

It would be cool indeed if Lee Young-ae were to put in an appearance -- perhaps in a Joseon flashback. It would be fun to have a cameo by a famous foodie, but alas, Yoon Doo-joon can't make it. Maybe Baek Jin-hee and An Woo-yeon could drop by. ;-)

I was already going to watch Matrimonial Chaos, I got a good surprise with the early release of OST part1, I love the vibes of it, please be good drama.

I'm so ready for Matrimonial Chaos 😍😍 despite my Mon-Tues slot being full with 4 currently airing dramas.
It's my first time hearing about Twelve nights the premise is good. I can give it a try.

...and how do I add these shows to my already overflowing drama schedule? Both sound sadly excellent. T_T

I can't keep up. Who do we send a cease and desist letter to?

*attemps to look up the mail office and/or the head office of the DramaGods* Eopseo.

I see Premiere Watch in the title and I have an excessive dramas heart attack. It's a prevalent disease among dedicated beanies. Fatal to the life schedule, healthy for the heart.

Matrimonial Chaos looks so good, it seems to be both entertaining and thoughtful. Besides, who can say no to that kind of powerful cast? But I think I'll wait until The Ghost Detective ended before binge-watching it. I just don't have the concentration span needed to juggle more than 3 shows at once anymore.

If I had nothing else to do, I’d watch both of these AND Dae Jang Gum is Watching. On “the list” they go!

Always ready for some Cha Tae-hyun

Bae Doona on my screen again? Yes please. And Cha Tae-hyun always is so endearing. This show wasn't even on my radar till now. Hope it gets picked up by DF or Viki.

I saw!!! Yay!!! Now just patiently waiting for it to be subbed completely.

What happened with Ms.Ma, Nemesis? It disappeared from the drama list on this page. And could you please add Big forest and Devilish joy to the list? It feels incomplete this way...

Ms. Ma, Nemesis is currently on air. It's 4 episodes every Saturday. It's been liscensed by Viki and Kocowa. Just checked Viki and episodes 5-8 are scheduled for Oct. 13, 2018.

Thanks for the notice.

Thanks @myra for mentioning MS MA, NEMESIS. Somehow I missed this drama all together. Crime/mystery are my favorite genre. This drama is based on Agatha Christie's writing, another plus. (Ms Ma= Miss Marple?) I checked out it's Wiki page and of the 4 leads I am familiar with Jung Woong-in (PRISON PLAYBOOK) and Ko Sung-hee (SUITS). I am not familiar with Yunjin Kim or CNU. (LOL. When I googled CNU the first hit was for Christopher Newport University in the US!)
You are right. On the right column under CURRENTLY AIRING MMN is the only one without a link. Right now I am live watching 5 dramas (one maybe soon to be dropped). I am going to try to work MMN in. The 35 minute episode format may help in that I can fit in an episode here and there. Here are the ratings for the first 4 episodes (not bad imho):
http://inkinews.com/ms-ma-nemesis/

Twelve Nights is the drama I'm most excited to watch, just because the premise sounds as far from being realistic as possible. Gotta love those K-drama tropes, though.

The premise of Matrimonial Chaos doesn't interest me, but I may give it a shot depending on what everyone thinks on here. Plus, I'm not familiar with Cha Tae-hyun, and I only know Bae Doo-na from Sense8, so their other work doesn't make it a must-watch for me.

I just watched the 1st ep of Matrimonial Chaos and was wondering if anyone else watched it and can help me figure out the name of an old song used in one of the scenes. Does anyone know the song playing at 41:30 when Cha Tae Hyun and Lee El are having a drink? It seems to start with "I sing through the sun and the stars..." I tried looking the lyrics up but couldn't find anything, unless I misheard the lyrics.

Almost got a heart attack. I thought that was Yoon Siyoon. Lol.

Will check out The Best Divorce.

My Mondays & Tuesdays are full, so I'll have to marathon The Best Divorce.

Thanks for the Premiere Watch, awcoconuts!

I wasn't planning on watching either of these, but checked out the first night's episodes of MATRIMONIAL CHAOS. Your article was a good introduction, and I enjoyed watching the show. Thanks! ;-)