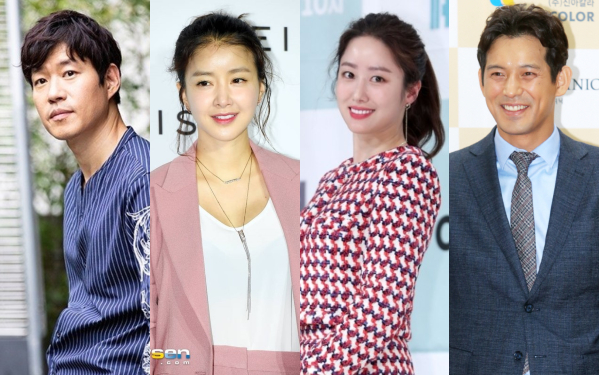 There’s not much by way of plot that’s been released, but the show will center around a lonely middle-aged man, Poong-sang, who has never once lived life for himself. That’s the role offered to Yoo Joon-sang, which would be an interesting transformation for the actor, who I feel has played much more self-possessed and commanding characters in his recent works. The show is being described as a comedy, so though Poong-sang is described as “pitiful,” I’m hoping for a lighter, human touch to his story arc.

Oh Ji-ho is up to play one of the reasons why our hero Poong-sang is such a pitiful figure: His role would be one of Poong-sang’s younger siblings, an irritating slob who lives off of his older brother and gets by by helping his sister-in-law’s car-washing business. I definitely like Oh Ji-ho much better in comedic roles, and I can easily picture him bickering with Yoo Joon-sang in a baggy tracksuit.

The show hasn’t released how Jeon Hye-bin and Lee Shi-young’s roles are connected to Poong-sang, but reports name Lee Shi-young as the potential lead female opposite Yoo Joon-sang, with Jeon Hye-bin playing her older twin sister. Penning the script is writer Moon Young-nam, of Our Gab-soon and King’s Family, and in the director’s chair is PD Jin Hyung-wook.

Though Lee si young is lovely, I really hope that jeon hye bin will land a successful drama or movie for herself. She is so beautiful and talented, the way entertainment industry sleep on talented people is sometimes really strange.

Agree with you. Jeon Hye-bin is quite talented but has been stuck in supporting roles for the longest time. She is one of my fave sageuk girls.
I too hope she'd have a successful drama like Kim Min-jung.

I'm a big fan of stage actors so I'm excited to see the talented Yoo Joon-sang back headlining another drama.
I'm surprised to see a Moon Young-nam drama on the weekday slot. Even the title sounds like her other weekend dramas.

Ooh, I've been missing Yoo Joon-sang, and I'm excited that he's gonna play a self-sacrificing pitiful character who learns to value himself. He's always great, but I like him best when he's playing a character with a lot of heart-- he's really good at imbuing such characters with a strong sense of goodness and integrity, making me emotionally invested in them.

It's great that there are two strong women in the cast, and Oh Ji-ho does fine in this kind of role. What worries me is the writer. Our Gap-soon was widely panned as being terrible. Even mary's devotion to Song Jae-rim wasn't enough to keep her watching. I watched King's Family which was a mixed bag, but at least it did have some funny parts. I just hope she doesn't go too far overboard with the character flaws and the angsty part of the story. Fingers crossed!

I thought Yoo Joon-sang was a little pitiful in Heard It Through the Grapevine, but that might just be me lol. This sounds interesting!

I like the cast but I'm really worried about the writer! Watched both her previous dramas, and barely survived Our Gab-soon even though I was watching at 3x speed.

What is Our Gab-soon? I don't know that.