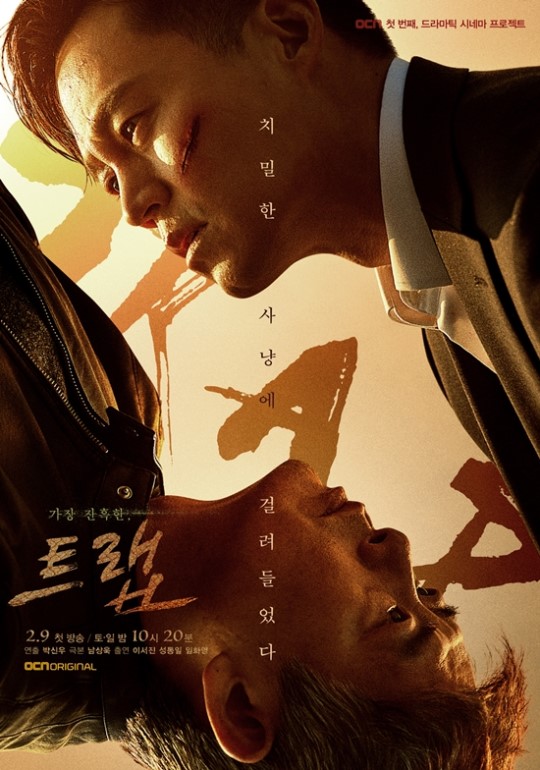 I’ve missed having Lee Seo-jin (Intimate Strangers) on my screen, as an actor or as himself in a Na PD show, so I’m excited to check out his newest drama, OCN’s Trap. The show marks his comeback to dramaland following 2016’s Marriage Contract, and I’m hoping Trap will make the wait worth it. It doesn’t hurt that the rest of the cast is pretty stellar, with Sung Dong-il (Your Honor) and Im Hwa-young (Sketch, Smart Prison Living) rounding out our main players.

Lee Seo-jin plays a former anchorman, and at the outset, it looks like he has the picture-perfect family, which all changes during one fateful family holiday. The teaser’s caption ominously reads, “A family disappeared,” as we see Lee Seo-jin being revived in an emergency room and tied up in a chair as he asks someone where his wife and son are. Police surround the scene of the family’s kidnapping and Sung Dong-il’s detective questions why the kidnapper let Lee Seo-jin go, as if he were “cornering a rabbit.”

The teaser tells us that Lee Seo-jin has “fallen into an elaborate hunt.” And that “hunt” sounds like a literal hunt, with people carrying rifles in the woods, presumably to hunt down Lee Seo-jin as he continues to search for his missing family. The teaser ends with his son calling out for him offscreen as we see our hero heavily bandaged, crying out on a hospital bed. Talk about a foreboding ending.

Though I’m most excited to see Lee Seo-jin and Sung Dong-il go head to head in this action thriller, I’m also looking forward to seeing more of Im Hwa-young, who put in a very likeable performance in Smart Prison Living as the younger sister of Park Hae-soo’s character. She’ll be playing a criminal profiler, which should prove helpful in figuring out who Lee Seo-jin’s tormentor is.

OCN’s Trap will be the next drama on the cable station’s hybrid cinema-drama project, and will run for a shorter 7 episodes, starting February 9.

Lee Seo-jin ages like fine wine... It would be a pleasure to see him in a drama.... (though I love him in variety and enjoying him bickering with Na PD.

Finally that “family tragedy” as reported before has finally been revealed, and let me just say that all of the Beanies bets that it’s the Truck Of Doom are NOT true😰😰😰😰😰 If it was the Truck Of Doom, then there would be a chance of an immediate death taking place, so a kidnapping sort of l at least puts that off a bit 😱 Can’t wait!! I’ve missed my ahjusshi crush being on my screen

I'm sure this will be very good, but I'd love to see him in a comedy, even though he would just be the grumpy straight man.

Only seven episodes T_T I'll have remind myself that great things come in small packages, right?

I SECOND that! It'd be a shame if he doesn't do more sageuks!!

My ultimate oppa beside Ji Jin Hee and Lee Sun Kyun,,coz considering their age, my other favorite actors are just my chinggu or dongsaeng, kekeke.

Can't wait for this show, it's on OCN so I hope the thriller vibe is decent. And I'm sensing j-drama vibe too on this, with the show only has 7 episode, a-la WOWOW dorama? excited!

I can't wait to see my ajusshi crush again. And same, @tipsymocha I also wanted to see more of Im Hwa-young after that memorable performance in Prison Playbook.

I only have fond memories of him in Marriage Contract. Isn’t that his latest drama?

i must have too many favorite actors cause news of one of them in a new drama just gets my heart rate up often. i totally love this actor and am really excited to see what he will do with this role. he was so fun with eric fishing their hearts out and being clever in accomplishing those delicious meals. guess i like it when a man can cook-of course my daddy was a chef so i love delicious food! he will be great in this i just know it! and if not i will just do a dimples check to see if he can make them show in seriousness too!

Oi Lee Seo-jin, why so hot? ♥ Plus the thought of seeing him in an action drama kinda seems hotter than the usual physically-inactive roles he does (yes, with the Na PD shows too..lol)

I will def pick this up, maybe it'll jumpstart me and make me come out of my kdrama slump. Plus only 7 eps? I hope it'll be really good!

Oh, this looks quite intense and interesting. Good to see Lee Seo-jin back. Also interesting is the shorter, 7-episode format. I wonder what the running time per episode will be given the number of total episodes.

Now this sound like something I would watch!
That evil laugh at the end was just chilling... whoo...

I'm excited for this!

Ohhhhhh I'm intrigued. Now to figure out where to watch this.

OCN + thriller = great combo!
This drama looks crazy intense. 7 episodes is pretty short compared to the usual lengths. Hope there will be subs. 🙏

I am so down for this.

OCN? I'm in all the way.
Love their shows period.