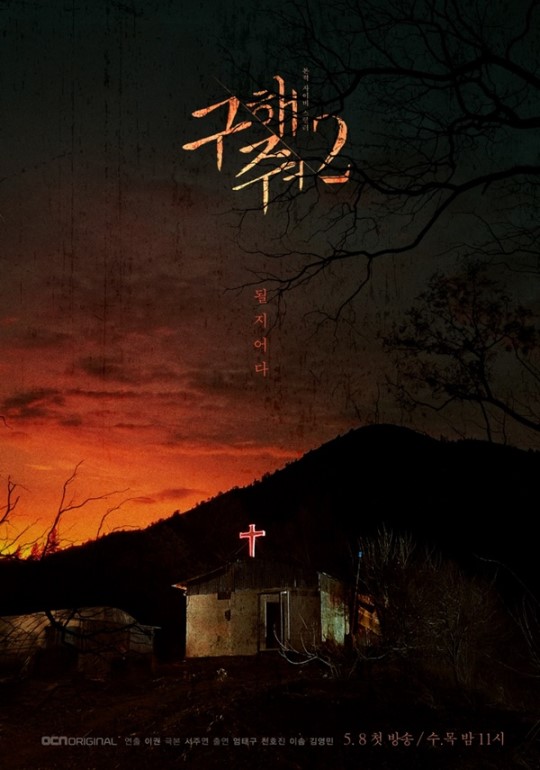 Ack. I distinctly remember how creepy the first season’s teasers were, and it doesn’t seem like the show’s creators are going to tone down the eerie for this season. There’s a new cast of fresh faces for the second season of OCN’s Rescue Me, which is almost disappointing, given how much I loved the ragtag gang last season, but I figure those characters have had their fill of crazy cults and opportunistic sexual predators.

This season will feature Uhm Tae-goo (Ansi City, Maids), Chun Ho-jin (My Strange Hero), Esom (The Third Charm), and Kim Young-min (My Ajusshi). Interestingly, Jo Jae-yoon (SKY Castle) is in the supporting cast lineup, but it doesn’t appear that he’ll be returning as his character in the first season of Rescue Me. Or maybe he is and he’s gotten an identity change since the events of the first season. Guess we’ll just have to watch to find out.

The two clips that were released are really short and there’s a lot of the same footage used for both. In the first clip, a lone black car drives past fields, and a man walks in the rain in the dead of night. A young girl with a pink backpack is walking along the side of a road in the evening and she’s being followed by someone in a car. We see a man enter a linoleum floor, and a cross which fades into a sparse, concrete church building built in the middle of nowhere. All through the clip, Chun Ho-jin prays that the town’s residents “will trust one another, and will dispel the evil spirits,” accompanied by some deeply disturbing violin playing.

The second clip starts with a dirt-covered road sign indicating that the area will soon be flooded. We see glimpses of the same street at night while raining, as well as the girl with the pink backpack. Uhm Tae-goo narrates what the captions say: “Here, everyone is crazy,” as we see him stand in front of the same concrete church building that we saw at the end of the first clip.

Rescue Me 2 will be directed by Lee Kwon, who has experience in both film and dramas, though the last drama he did was Shut Up: Flower Boy Band back in 2012. Since then, he’s directed films like My Ordinary Love Story and last year’s Door Lock. Rookie writer Seo Joo-yeon will be penning the script, though she’ll have some help since the project is an adaptation of an animated film titled Pseudo.

Rescue Me 2 will premiere on OCN’s Wednesday-Thursday slot on May 8.

I'm watching this. With lots of pillows and hot choco.

Hot choco sounds great, but be careful when rinsing your mouth with water afterwards.
#bettersourcethewater

You'll need the pillow. I had to hide behind mine a couple of times T_T

Awww I really liked Taecyeon in this one but will check it out to scare myself.

The last one scared me sh*tless and I hope this one does the same. Pleeeeeeeeeeeeeaaaaaaaaaase be a good sequel!

ah!.. last one was genuinely scary
but in terms of cast, somehow like part 1 cast.. this one has adult (not teenagers) characters so this going to be more gritty

The source animation movie, "The Fake" is written and directed by the director of "Train to Busan". It's about an alcoholic who finds out that the religion that has overtaken his town is a cult, but nobody will believe him because he's a social outcast. I can just imagine the level of frustration so I have kept myself from watching it.
Anyhow, I'd prefer if this was a separate adaptation, rather than a sequel to "Save Me" because it another covincing portrayal of the psychological power of cults.

I absolutely loved Rescue Me. It was phenomenal. The acting was great (I even though Taecyeon did a good job and never thought I would ever say that), the cinematography, the writing, the direction. Even though this is a sequel it looks like none of them same people will be working on it. I hope it's as good as the first one and not just a sad knock-off.

I'll definitely check this out.

Soo I had Youtube on autoplay and realized while reading this article that it changed to Taeyeon's "Rescue Me" :O

Wow the cast lineup definitely doubled my excitement!! I hope it is as dark and creepy as the last one. I have yet to see a horror/thriller as good since then, The Guest almost get to that level but the storyline got too repetitive. Crossed finger for this to be good.

I saw this on ig and thought....
why OCN? Do we need to this again?
and proceed to find the premiere date....
smh
what is wrong with me...