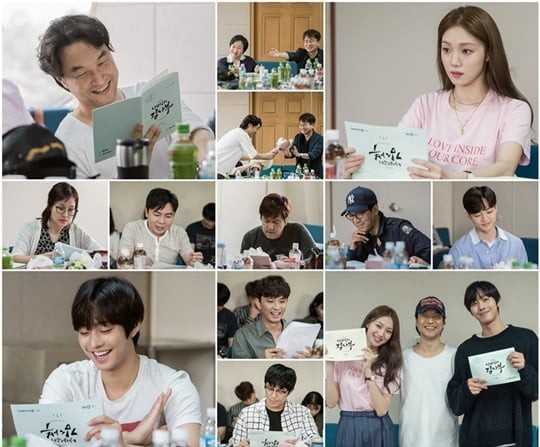 SBS drama Romantic Doctor Teacher Kim is returning for season 2 and new stills have been released featuring the cast and crew at their first script reading, which took place in September.

The overarching story of what it means to be a real doctor continues in this new season with Han Seok-kyu reprising his role as the eccentric and cantankerous Teacher Kim. And he is still running the wayward Doldam hospital in the countryside, along with his quirky and loyal group of staff.

There are some new faces in the cast with Lee Sung-kyung (About) playing Cha Eun-jae. Cheerful in disposition, she worked extremely hard to excel in her job and is currently a second-year fellow specializing in cardiothoracic surgery. Joining her as a new recruit at the Doldam hospital is Ahn Hyo-seop (Abyss) who plays Seo Woo-jin. In contrast to Lee, Ahn is more cynical in personality and is a second-year fellow in general surgery.

On the production side, writer Kang Eun-kyung (Fox Bride Star) and PD Yoo In-shik (Vagabond) from the first season are working together on the second season as well.

I’m sad that Yoo Yeon-seok and Seo Hyun-jin won’t be reprising their roles, and I was hoping to see more of Han Seok-kyu and Kim Hye-soo’s story if they did a season 2 (Is it too late to wish for another cameo?). However, I’m still excited to see what’s in store for season 2 and I hope the creators have a good story to tell with the new characters. 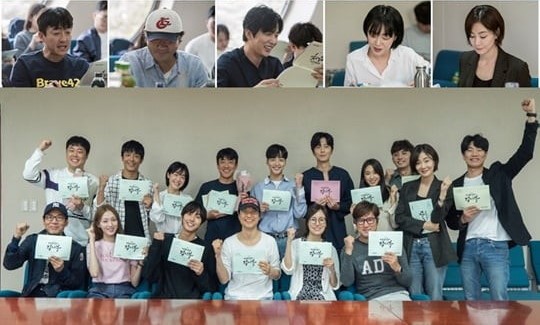 I loved the first season. I hope the second season is good too.

Han Seok kyu still has the hair from Watcher.

Hum... I loved the first season because the actors were great. Yoo Yeon-seok and Seo Hyun-jin were great and had a beutiful chemistry. I don't specialy like Lee Sung-kyung and Ahn Hyo-seop... But there is Han Seok Kyu... What a dilemma!

Am I the only one who thinks this didn't need another season?

Oh yay there are more than a few reprisals- its not just HSK- I like it! Looking forward to the familiar faces, with high hopes for the new characters too. I just hope the writing is as good this time as the first one.... *fingers crossed*

Color me skeptical- I know it is a different kind of show but remember that lightning did not strike twice with the second season of WOO HOO WAIKIKI. Having the writer from FOX BRIDE STAR is not increasing my confidence either.

On the other hand with Han Seok-kyu returning there is hope. He was spectacular in the first season, and the set-up of the show allows for new characters as long as there are truly new plotlines. So this could really work well. There are enough returning characters to give it the same atmosphere, so if the writers can deliver good scripts it may turn out well.

I do not watch many 'medical' dramas (or legal ones for that matter) but this show was well worth it in its first season. Here is hoping for the best.

Obviously, the idea that the writer of Fox Bride Star is on board instils fear, but this is still the writer that wrote the first season. I actually started watching that dumpsterfire because I knew she'd written Romantic Doctor, so perhaps she's a hit-miss-hit kind of person?

May be she is- I have seen that before: The writer of one of my favorite romcoms, MARRIAGE NOT DATING, went on to totally lay an egg called SHY BOSS.

Ah, yes, I remember the one. When Park Hye-ryun wrote While You Were Sleeping, it felt sloppy to me compared to Page Turner or Pinocchio or I Hear Your Voice.

ugh ok is it just me but i'm a little salty that yoo yeon seok and seo hyun jin are not coming back???? theyre one of the main reasons i LOVED romantic teacher doctor kim!!! also was looking forward to seeing yang se jong and seo hyun jin's relationship play out too......ugh

why tease us with another season when half the main cast is not returning lol. I LOVED seo hyun jin's character. i LOVED yoo yeon seok's character lol

ok i'll shutup now. who knows maybe lee sung kyung's character will be interesting too....but like ugh idk ahn hyo seop is like so new and so green. i'm doubtful about his acting chops esp when put side by side with han seok kyu lol

Well,one big reason i'm pumped up about this is that many of the original cast are back so going in positive...Curious if they will mention our previous 3 leads even more when Im Beom's (Yang Se Jong) Dad is returning as well...I just hope the script will be as good as the first...

I'm hoping for some cameos~ Yang Sejong would be great to see again as well. But I'm hopeful with this cast. My son, Chan (from 30 but 17), is in it, and his uncle making a cameo would be icing on the cake! I'm glad to see much of the ancillary staff returning to give it the same feel, like we're rejoining their lives after a little while and that they've been working there all this time. Finger hearts, everyone. I loved this show the first time and hope to love it even more the second!

BUT this shouts for a Season 2, if only to show the "Romantic" side of Kim Sabu... with KIM HYE-SOOOOO!!! Ooohlala!!

Do i need to watch Season 1 before i can watch this?

I didn't think they would make a season 2 out of this! But glad that the staff or majority of the cast and crew is still the same and Kim Sabu~!