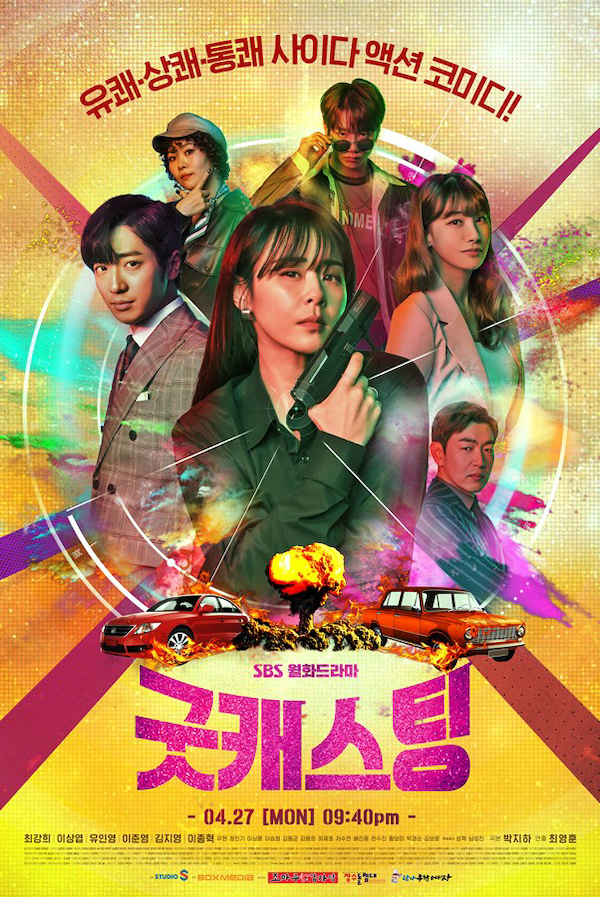 The colorful Good Casting poster above features Choi Kang-hee (Mystery Queen 2) front-and-center as the lead for this “Delightful, refreshing, satisfying Sprite-like action comedy.” The psychedelic Austin Powers-esque style makes an interesting contrast with the characters’ serious expressions. The new drama is about a set of female covert operatives who were put on the sidelines and made to work desk jobs. They get the once-in-a-lifetime opportunity to take on a new field operation.

In the teaser, orders come from above to bring Choi Kang-hee and have her take down “Michael” at whatever cost. Choi Kang-hee, the slightly crazy problem child of the intelligence community, strides out of prison. Lee Jong-hyuk (Spring Must Be Coming), who plays the team leader of the operation, promises to lead his team into the lion’s den to lure out the fugitive.

Choi Kang-hee and Kim Ji-young (Here Comes Love) send flying punches at a criminal, as they promise to finish things cleanly. Kim Ji-young plays a legendary black ops agent who retired eighteen years ago and became an ordinary housewife who fears menopause more than anything. In the next scene, she orders Yoo In-young (Cheese in the Trap) to turn the truck they’re driving, but it ends in an inevitable explosion.

Yoo In-young plays a white ops agent who is sexy and intelligent, but with a lovable clumsy side to her. The next clips show these women kicking ass as the text onscreen says: “Their refreshing action begins.”

Also on the main cast list are Lee Sang-yub (Weekend Afternoon Lovers) and Lee Joon-young (Class of Lies). Lee Sang-yub plays a handsome tech company CEO with a great scholastic and family background. Behind his gentle manners is a stubborn personality. Meanwhile, Lee Joon-young plays a rising star who acted as a popular second lead in a hot new drama.

I had no idea there was a badass female team drama coming soon. I will have to check this out!

This looks so fun, definitely gonna check it out.

Is this the fun kooky drama I need to get me out of my funk? I hope so. Please don't muddle it with a romance line drama gods.

What sacrifices are the drama gods taking these days?
Are we still eating Subway or do I need to buy a new Dyson?

Hyena prominently featured Aunt Annie's Pretzels, which is an appropriately mediocre mall version of a soft pretzel. Unfortunately, my local malls are closed, so I'm not sure how I can make this sacrifice. I guess I'll have to order some curbside pickup of Subway sandwich.

You know what's funny? My local Meijer has one of those pretzel stalls in the grocery store. I could do the work for you?

And yes, I'm holding out hope for this and Mystic Pop-up Bar being the fun dramas of the season!!

I'm with egads, I desperately want a fun drama right now. And one that's fun because it's good and trying to be fun.

I hope this is as fun as it looks. I'm ready for something lighthearted and funny. 🤞

I'm very excited for this, I've missed Yoo In-young on my screen!

The poster is so vibrant and eye-catching! This drama looks like it will be fun. Hoping if it will be like SBS's The Fiery Priest which had a great combo of wacky humor and action.

I'm excited to see Choi Kang Hee in another lead role too.
She looks pretty with her long locks. I've only been used to seeing her with short hair.

And this drama has Jun in it, so it better be good.

Has this already been filmed? How can Lee Sang Yeob work on this and the currently airing drama "Once Again"?

This is a pre-produced drama according to an article I read with Yoo In-young :)

I hope more dramas can end up being pre-produced for obvious reasons. I am glad that the labor laws for time have helped to curb the filming hours too.

Okay I think it's just me and my computer, but the posters in the last two posts look weird. Like my-screen-broke-and-now-the-colours-are-saturated-and-wrong weird. Everything else is fine. Does anyone have an idea what's causing this?

Somebody please explain to me what is the difference between white ops and black ops agent? hahaha

Yieeeeeeee I love them all! Also, correction: Choi Kang-hee's last drama was Mystery Queen (the only season). :-*

Thank you for the heads-up on GOOD CASTING, @tineybeanie. I've been keeping my eyes peeled for Lee Sang-yeob. TOP STAR YOO BAEK was nutty as a fruitcake at times, but Ma-dol oppa left me with a nasty case of SLS. After his turn as a passive biology teacher married to a battle axe in LOVE AFFAIRS IN THE AFTERNOON, it will be fun to see LSY portray a feisty tycoon. Oh, wait. He'll cross paths with the spitting image of his first love...

If Show handles this in a suitably campy or cheesy manner, I'll be happy. I've truly exceeded my quota of slow-burn tortured romances for the year, and maybe the decade. (I'm looking at you, I'LL FIND YOU ON A BEAUTIFUL DAY, WELCOME, A PIECE OF YOUR MIND, and FIND ME IN YOUR MEMORY. Not to mention CHOCOLATE and CRASH LANDING ON YOU.) Don't get me wrong. I enjoyed all of them to varying degrees, and some were downright excellent. I just need more joy in my Kdrama life right now. Fingers crossed that we'll have plenty of opportunity to laugh our butts off during this drama. Oh, yeah. Please, no serial killers, face blindness, or discarnate entities requiring exorcism.

Here's hoping we get a good dose of wacky humor as the ajumma agents take to the field. Yay for badass matrons armed with thermonuclear hot flashes. ;-)

I am in. Please drama gods let it be good. Do you take additional drama watching hours as offering?

Choi Kang Hee in an action comedy? YES. Too bad there isn't any Kwon Sang Woo though *cries in Mystery Queen, The Only Season*