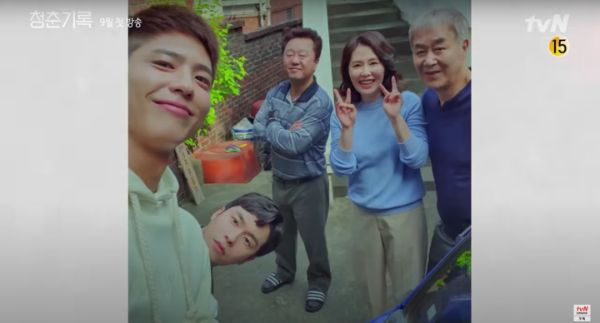 Upcoming drama Youth Records has released a new teaser featuring Park Bo-gum (Boyfriend) and Park So-dam (Parasite). About the bright, shining aspect of youth, this drama tells the story of passionate young people pursuing their dreams one step at a time.

Having not tasted the harshness of reality yet, these youths actively step towards both their dreams and loves with a headlong determination. The teaser begins with different youths momentarily stopped on a rainy day. As the pedestrian signal turns green, they each begin to walk their own way, just as though they are taking their first steps on their life journeys.

Then we’re introduced to Park Bo-gum’s family in a cute selfie photo. Park Bo-gum gets his hair and makeup done at a salon before walking in a runway show. After a fun night of karaoke, three friends run with happily through the streets at night. Park Bo-gum narrates: “Please remember and let’s be together.”

Park So-dam looks through a bus window as rain falls outside. Then, she meets Park Bo-gum somewhere on the way and they run together to avoid the rain. The final scene shows them together on the steps of a building, looking as if they’re about to have a serious confrontation. 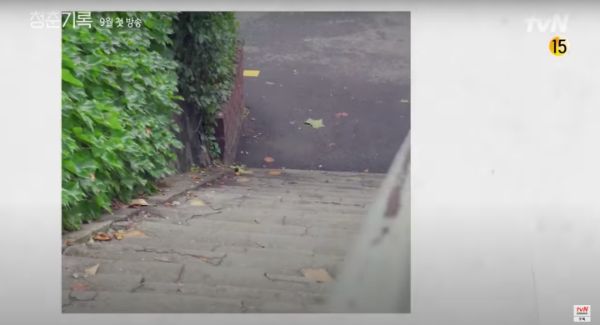 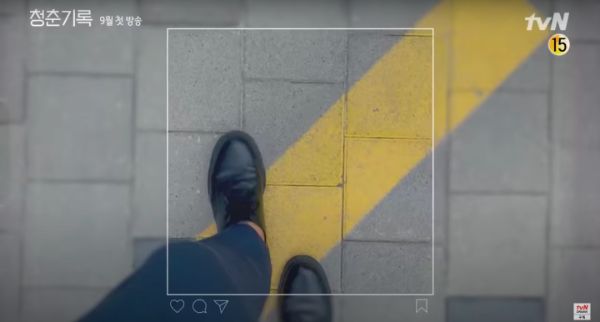 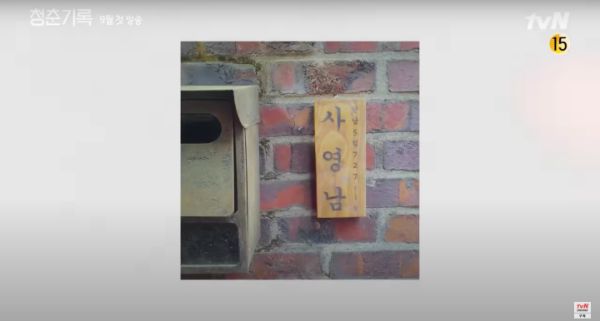 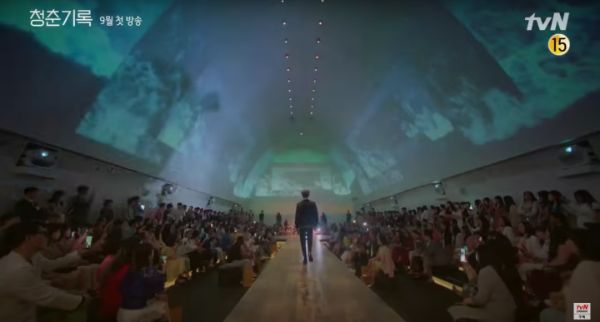 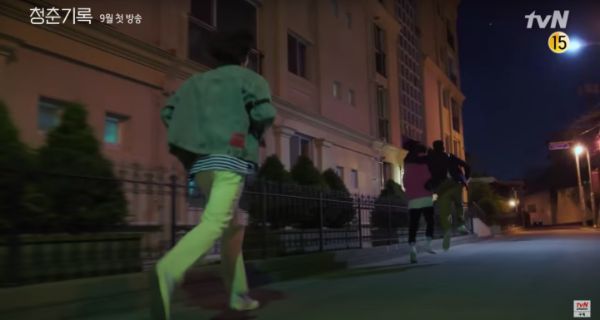 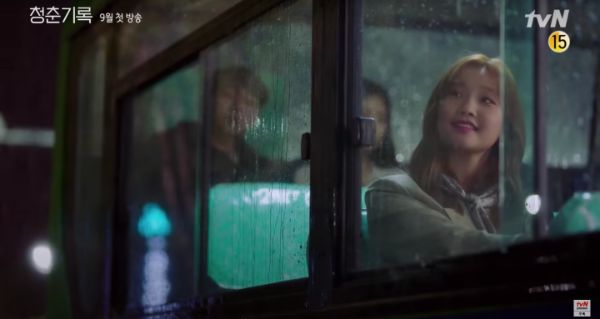 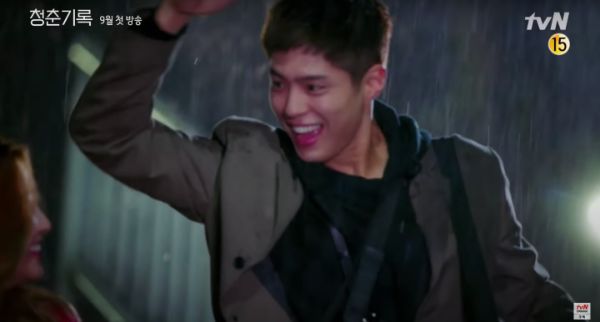 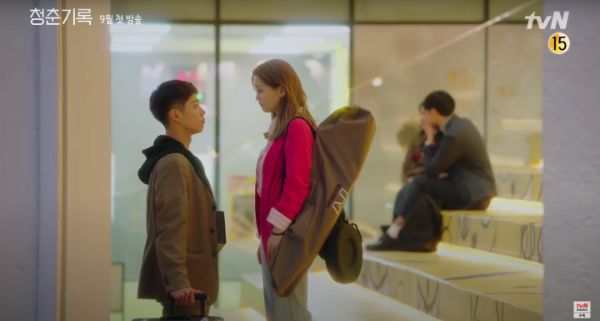 Finally! I needed Park bo gum back in the dramaland. The premise looks nothing out of ordinary but a youth drama done right can become fantastic. Hope for the best!

For me, the two leads and the director make this an absolute must-see but the fact the writer is Ha Myung Hee is the turd on the birthday cake (sorry about the vulgarity but it precisely captures my disappointment) since I detested Temperature of Love, High Society and Doctors in varying degrees.

I'm with you on this writer. *sigh*

For me, Temperature of love was 👎 doctors was also 👎. High society was only watchable for park thing shik’s parts with lim ji yeon. They were the only reason I watched bits and pieces of that drama. Don’t even remember what happened to the rest of story as didn’t watch those lol always skipped to park thing shik’s scenes, mostly the romance storyline parts.

Being completely honest, the only reason why I will watch this drama is solely because of Park So Dam. If she isn't in this drama, I would take a look at the writer and say, "Hell no."

I love PSD and her acting is so good to watch. That's the reason I'm tuning in. Maybe HMH can spare me the lifeline and make this drama tolerable.

I agree I'm only watching for her too, I've loved her since Beautiful Mind.

Count me in. I'm gonna watch her because it's been century since her last drama. I have no interest for the rest tho.

3 Playstore, Okay Or Not Okay

THIS! This was supposed to be the drama where Jang Ki Yong had the chance to reshape himself as the funky cheery boy and use his time as a model to shine as an actor! WHY???WHY DID YOU HAVE TO CHOOSE THE OTHER DiSgUrShTiNg script Ki Yongya??? I had to break the oppa law and skip this one.

A big mishap on his part. This looks like it could do solid ratings wise (Like an Age of Youth series), and easy win popularity wise.
Compared to his fellow model mate: Nam Joo-hyuk who has been getting great offers even though Jang Ki Yong has the upper hand (Acting wise). And he's enlisting soon too, choices lol.

LOL, there was one fan on DB who told me JKY turned down YR for Born Again because he thought YR wouldn't be rating hit or something. LOL.

Nam Joo Hyuk really polished himself acting wise over the years. I loved Radiant and now eagerly waiting for his next projects.

I loved him in Weightlifting Fairy Kim Bok Joo. He was such a natural in that. I've loved him since then. I didn't watch Radiant but I'm gonna trust what you say about it

Radiant told a very heartwarming story with some nice twists. And I liked Han Jimin more in it than I did in Familiar Wife. And Nam Joo Hyuk's improvement was very much visible if you think about school 2015 while watching radiant.

His next project along with Lee Byung-Hun & Han Ji-Min being postponed, I read it somewhere.

Yep it's a film

Didn't the other fan, I forgot the name of the fan who once replied me on DB, that JKY thought YR would have bad rating?

JKY probably thought YR's script is crap. Though must say, despite how shit HMH is, Born Again is even worst. But eh, it's his choice.

from what i know and i might be wrong. JKY was offered another character (2nd lead) but his news was reported before PBG. i guess he rejected because he's not the main and joined REBORN.

if you look at 2nd lead character now (byun woo seok) he's true model with 190cm. height just like JKY. and i saw studio dragon report, they also mention PBG , PSD , JKY altogether for their 2020 upcoming project even before the news released.

so i'm kinda understand why he choose reborn over record of youth at that time.

Youth Record was offering to Jang Ki Yong as the main lead, which is the role PBG is playing, never the second lead.

JKY turned it down because I quoted, "Anyone can play someone tall and good-looking. Rather than that, I want to discover myself while acting in a world I haven’t experienced."

So essentially, he just didn't want to play the same role as PBG is playing because he wants diversity to develop his acting skills.

the quote you wrote is not about youth record. it's just his interview in magazine. the reason he gave for rejection was only schedule conflict. i can't post photo of the studio dragon report here but nvm. even all kfans in dc gallery all know he was offer 2nd lead. only inter fans here dont know...

Also, PBG's character - Sa Hye Joon - is based on JKY. Tall model turned actor is the bio of Sa Hye Joon when JKY was offered.

JKY just passed this character in this project that was based on him.

Is Born Again really that bad? I don't watch it though.

It is, lol. But you can just laugh at the absurdity.

I watched 5 minutes, that was long enough to toss into the pile that had the drama-that-must-not-be-named by Ji Chang Wook. Then I tuned in again after ep8 to at least look at JKY I failed again.

Hope it will be enjoyable as the cast is amazing!

Jang Ki Yong turning this down for Born Again is a very WTH choice career wise? Considering he's soon to enlist, and it would have been a different role (Non serial killer/psycho role). Strange choice.

Not a bad teaser, it could be something special showing what youth is like before we all get jaded lol. Capturing the beauty/essence of youth/being fresh and green after college or maturing into adulthood is something I'm enamored by. I hope this show captures that!

I liked the trailer. Seems like a light fun drama. And Park Bo Gum, been awhile!!
But that writer. Ehhhhmmm. Lowering my excitement.

Park So Dam, for her, I will try anything!!!

Me too. I'm watching this show for her.

Otherwise, I barely tolerate Ha Myung Hee. As for PBG, no comment.

I thought Love in the Moonlight (although I prefer the alternate title Moonlight Drawn by Clouds) is utterly charming and is my favorite among the "lighter" sageuks. I realize Encounter is far from perfect but it is so lushly romantic, my wife and I have re-watched it more than once as a "couples activity."

Moonlight came out almost the same time as Moonlovers: Scarlet Heart Ryeo was airing. I fell in love with IU’s character so I ended up skipping on Moonlight.
I have tried watching Encounter but I only finished three episodes. I don’t know, maybe I wasn’t just into the noona romance plot.

Moonlight Drawn by Clouds was adorable and then sad and then adorable again. I wrote about it here: https://www.dramabeans.com/2018/02/one-true-parings-from-subordinate-to-friend-to-brother-to-lover/

I love the square ratio and random photos! But let's talk about how beautiful these two are in that last frame looking at each other! (yes i'm talking about ONE FRAME of Park Bogum and Park Sodam I KNOW but it's so pretty). I'M GETTING EXCITED!!! but..... Doctor's..... Writer...............

Ah also idk how but the teaser somehow gave an age of youth vibe?

It's aiming for slice of life in youth with a romance take, which is common for Ha Myung Hee. LOL.

Ohh- i only know temperature of love, high society, and doctor as her projects which are nowhere close to slice of life but does she have any slice of life projects?

I love PBG and PSD. I like the director's previous works. And that trailer is soo lovely. I have not seen any of the writer's works so hopefully she is good. I would like this to be a success for all involved. 😆

i will tune in for PBG and secret forest PD. not sure about writer since i didnt finished Doctor and never watch her other works. i hope she improves herself this time...

never impressed with PSD drama but i'm kinda ok with her parasite character but i dont think this drama center on romance anyway. it's mainly about PBG growth.

One of the reasons why Ahn Gil-ho is not directing "Forest of Secrets" Season 2...

This one is on my watch list... In addition to PBG and PSD, Ahn Gil-ho never disappoints...

PARK SO DAM. AND PARK BO GUM. the reason i'm going to be tuning in. + I'm glad to see PBG in a youthful fun drama

I did remember ranting about when will PSD get offered a role in a drama since Beautiful Mind over so I'll watch anything if it's her.
Never see any of PBG projects before so it will be my very first time watching him.

I'm thinking that this drama won't be too much of a stretch for PBG before his military commitment. Something fun and easy for him to do before enlisting.

If both this and Seo Bok are major hits for him, I imagine his management (in my head, I am picturing Kim Seul-Gi from Find Me in Your Memory) will have a frustrated meltdown about losing all that momentum because of conscription.