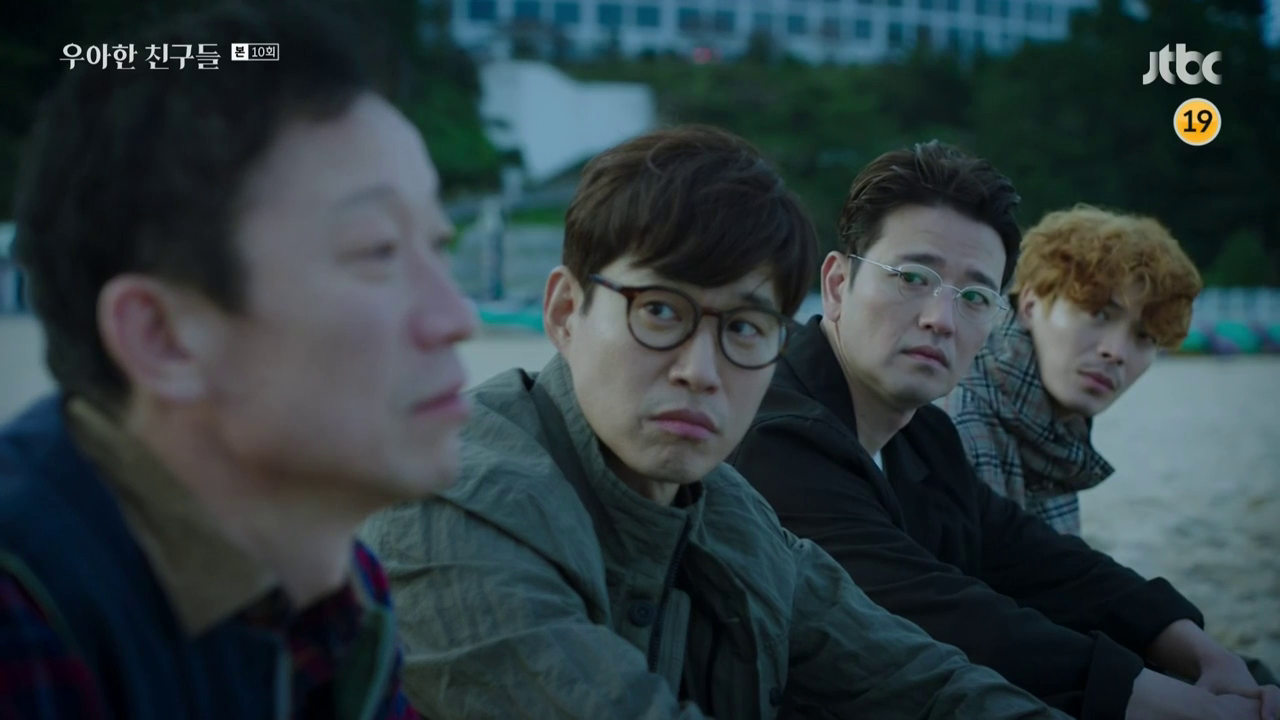 In one of its strongest weeks yet, Graceful Friends tells us more about our characters and their pasts, as the details begin to fill in. But these details reveal more than motives for murder, and we get deep insight into each character — what happened to them in the past, what’s pressuring them in the present, and most of all, how their friendship responds. 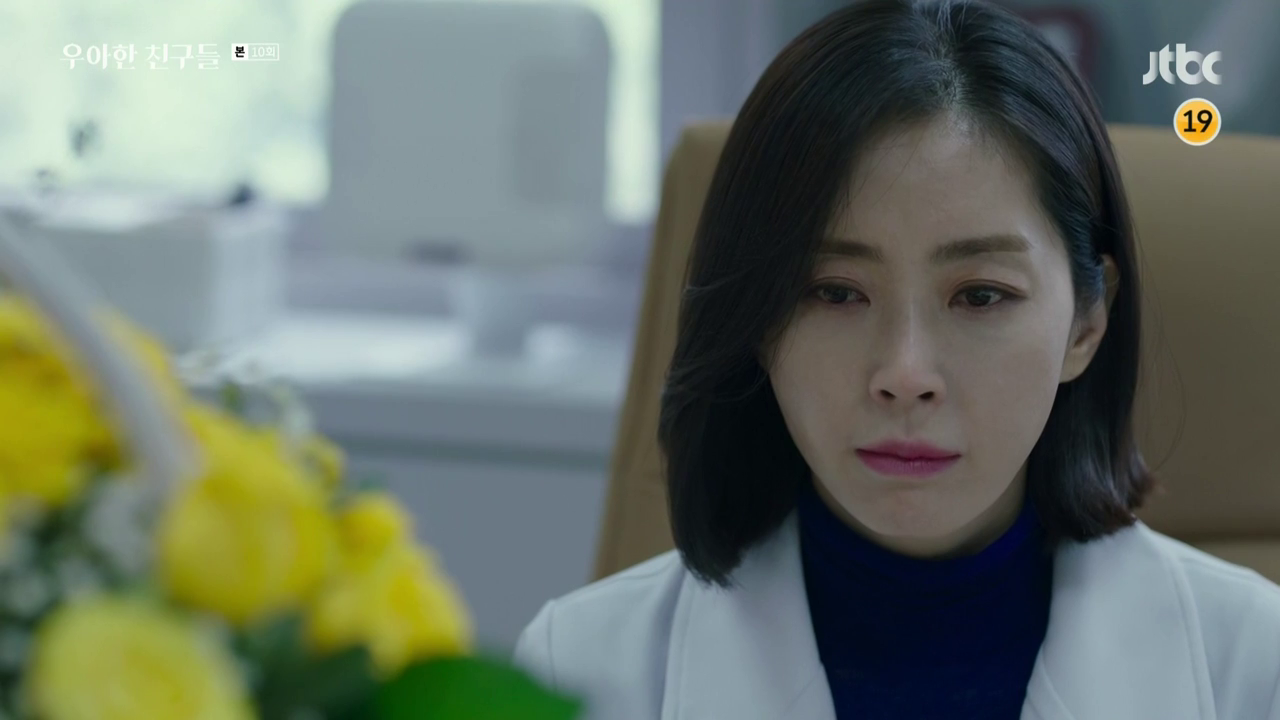 Graceful Friends has shown off some pretty impressive scriptwriting thus far, and this week the drama really outdid itself. It’s been a while since I’ve seen such a fantastic balance of thrills, intrigue, pathos, and heart. There’s no shortage of any of those this week, and the more we learn about each of our characters, the more we realize just how deep the story goes. But Graceful Friends is more the just an intricate story weaving from past to present — it also shows us depth of emotion and spirit. This is how to do a drama — not a bit of it flat or two-dimensional, but instead, with a richness that just gets better with each episode.

With all that praise out of the way, let’s talk about what happened this week in terms of the plot — because we got a lot of reveals! Of primary importance (at least to me because I really like this plot line) was the information we got around Jung-hae and Jae-hoon. Their past relationship has been merely hints and glances, but now we know for sure: Jung-hae was engaged to Jae-hoon, but then coldly left him when she fell in love with Goong-chul. But as a testament to the depths of this writing, a broken heart and engagement is so much more than just that: it leaves its mark on everything. 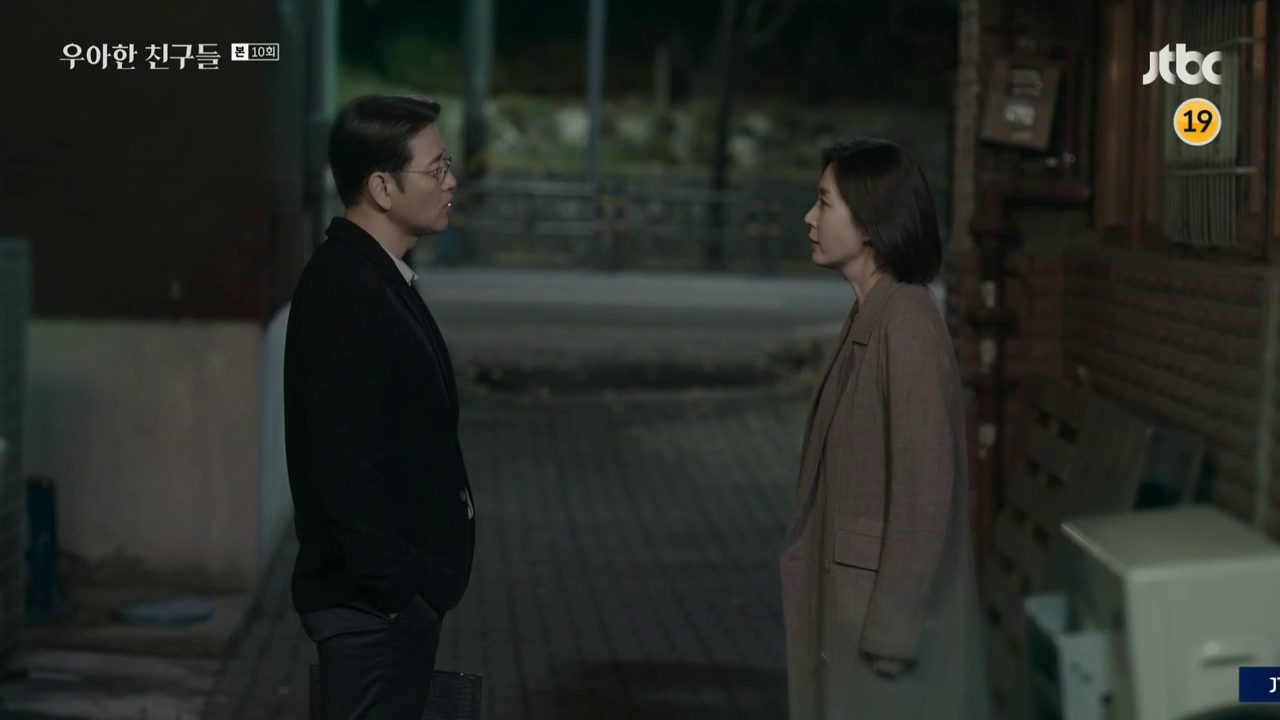 We get a clearer picture of Jae-hoon this week, whether it’s Jung-hae calling out his coldness and defending herself for leaving him so many years ago, or if it’s the slap-in-the-face (or is that japchae-in-the-face) Jae-hoon gets from his smothering family. Jae-hoon’s all but said that he’s struggling more than ever with what Jung-hae did to him, but I’m loving the complexity with which this plays out.

Part of him hates her and wants to see her in pain, but part of him also sticks close to her because (I think) he’s still in love with her. He knows about her past even more deeply than her husband, takes care of her career due to his connections, sends her secret bouquets… and yes, he’s the mysterious hands behind the mysterious laptop that holds all the incriminating photos of her.

It makes so much sense, and works so well, that he’s been somewhat behind all of this, and what great writing that we can hate what he’s been seemingly involved in, and yet can understand him a little too? With Hae-sook back, his crazy ex-wife returning, and the repercussions of the incident Jung-hae’s recently been through, we’re slowly but surely seeing a bolder Jae-hoon. 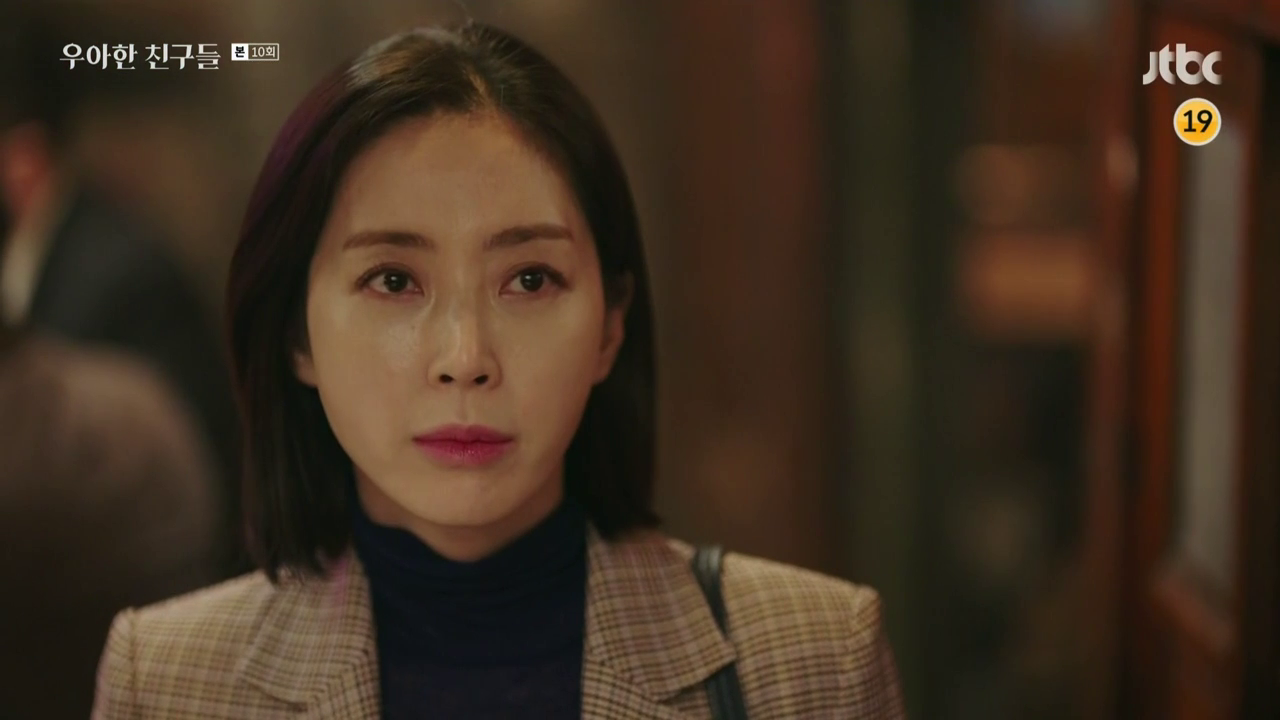 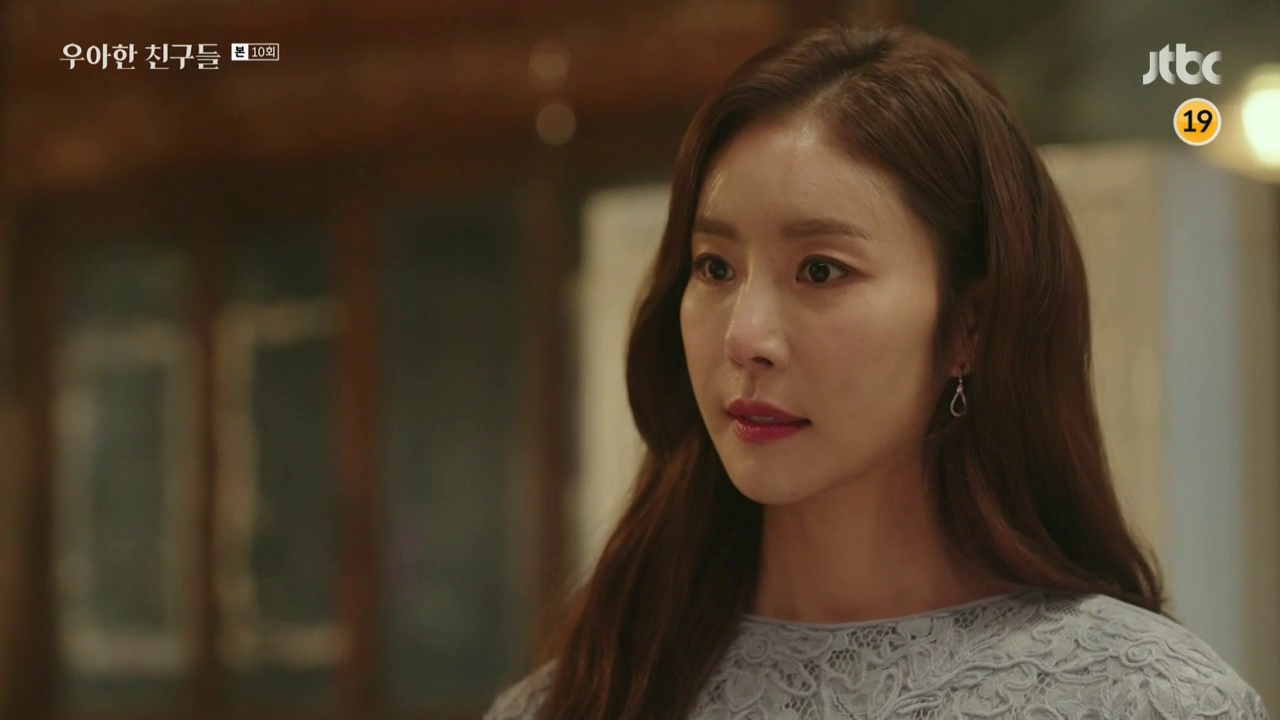 Some new insight between Hae-sook and Jung-hae reveals the real source of their antagonism: during college, Jung-hae was the person who released the photos of Hae-sook going to a hotel with her professor. Hae-sook holds Jung-hae responsible for the reveal, the death of the professor that followed, and even for being the reason that she and Goong-chul broke up. For Jung-hae, this is merely another way she is being “punished” for what she did in the past, and she threatens Hae-sook to stop messing with her marriage. I’m not sure if Hae-sook really cares for Goong-chul still, or just wants to wreak havoc, but either way, I neither like nor trust her.

The incident with the professor also has an important bearing on other parts of our plot: the old woman in the nursing home that was tended by both Jung-hae and Man-shik was the professor’s wife. And even more interestingly, the assault that Hae-sook endured by that professor is exactly the same scene that Jung-hae described when she “confessed” about Kang-san’s assault. The story seems borrowed from the past, and that makes it even more layered and complex. 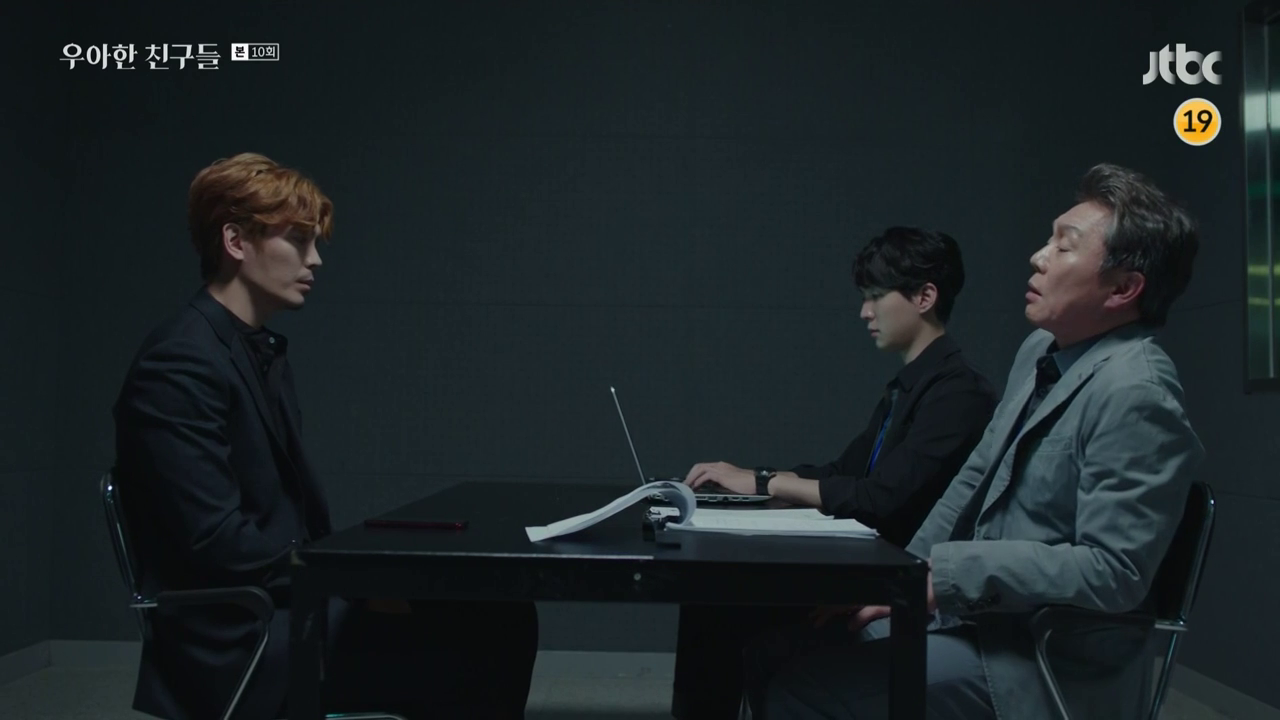 The murder and mayhem around Kang-san that took up the first few episodes of our drama still hangs over everyone, but I am really liking how the drama handles it. It colors our plot and our characters, and it also pressures everyone quietly from the background.

Ji-wook is the sweetest most wholesome creature ever (right? RIGHT?) and instead of getting ruined by Ae-ra, he’s actually fallen in love, and is a beacon of light in the rather dark world she lives in. This plot line is still moving, though, with a mysterious “friend” of Kang-san who knows both Jung-hae and Ae-ra, so we are only getting deeper into the mystery at this point, and who knows where it will go. 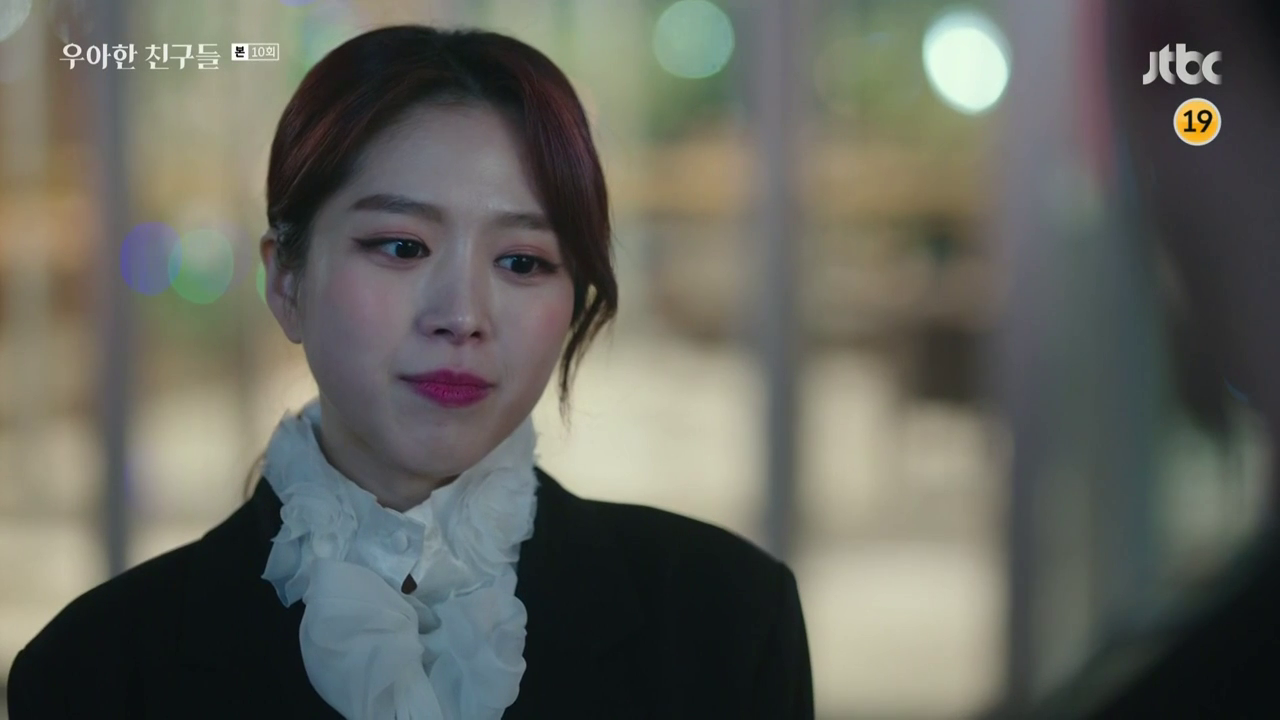 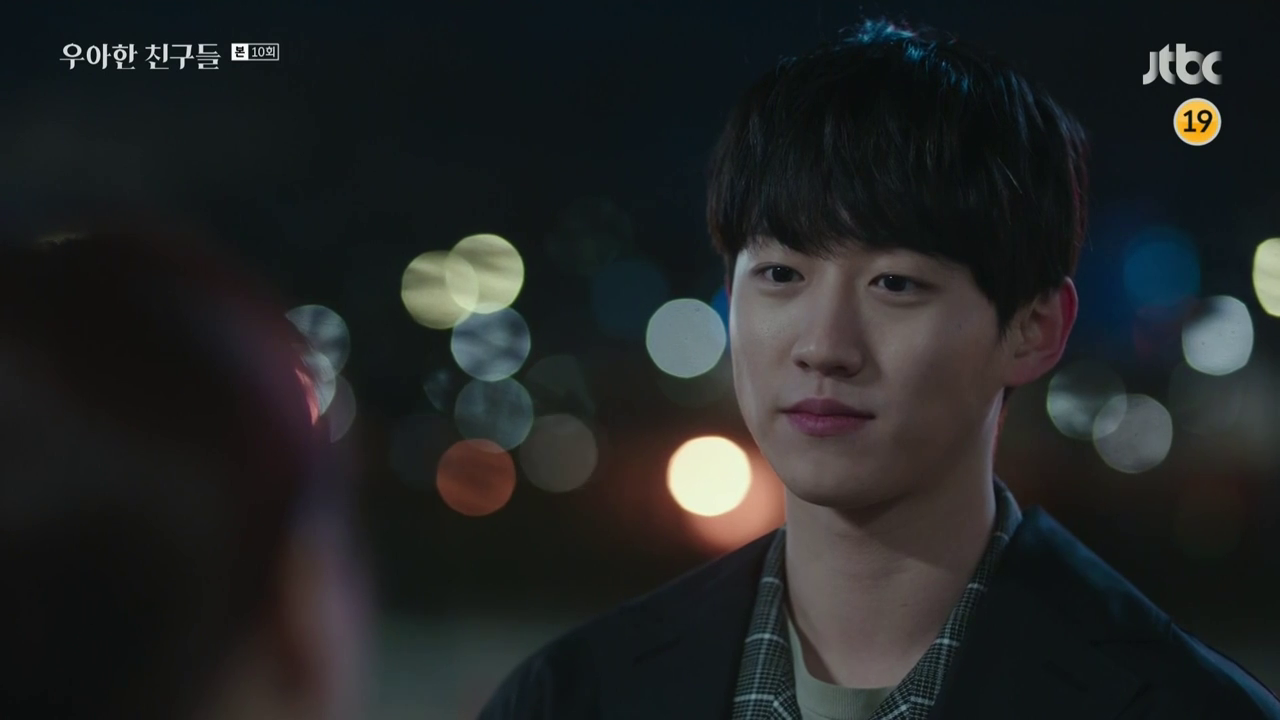 We end our episodes this week with everything coming full circle. We have seen each of our friends reach a breaking point: Goong-chul is fired from his job, Hyung-woo leaves the film that his wife made possible, Jae-hoon is reeling from his clingy ex-wife returning, and poor Chun-bok shares his dementia diagnosis (nooooo!). Whether our friends have fought with each other outright (they have), or secretly fought with each other over the years (they have) — still, they all go right back to where they started: their friendship.

The final scenes of our drama this week were so moving — our friends take a spur of the moment ride to the beach, and everyone shares his hardships. They react to their own pain as much as the pain of their friends, and we see them reacting in this messy, crazy, completely beautiful way — laughing together, crying together, running into the ocean fully clothed, and shouting at the waves to “bring it on!” since their lives are only half over, and there is so much more to live.

What a fantastic bit of filmmaking to make you smile and tear up all that the same time, and I’m ending right where I started: impressed with how this drama can balance exciting suspense with the most authentic and compelling characters and relationships I’ve seen in a while. 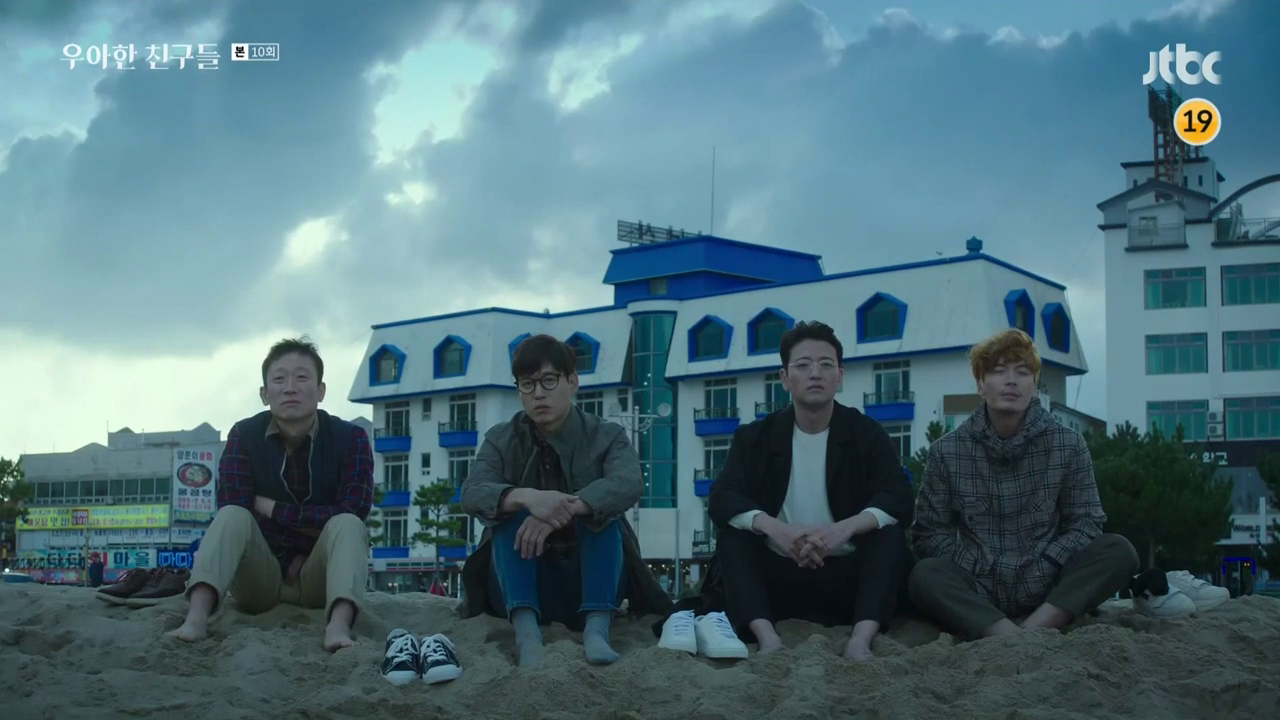 100% agree! I love the layered characters & story. Really in the zone of World of Married Couple & Sky Castle. Keeping you curious and felt satisfied with the result. (wish song ji hyo was in this drama rather than..) sorry, they are in the same channel but..

Well, I like this episode 'cause it was a good scriptwriting. Thanks @missvictrix for her weecap of this thrilling show. I can't wait what episode 17 means. I think episode 17 will be special.

Thanks for the weecap missvictrix, your review is really on point. This drama really have all the intrigues going on that keeps you glued to it. I was low key watching it for Song Yoon-Ah and glad that it turn out better than expected.

@missvictrix I wonder if you have watched the preview for the next episode as well. If you have, could you explain about your views on it too. I am yet to find a subbed version of the preview so I cannot fully figure out about it.

I also don't think it was Jung Hae who actually spread those photos. If she really wanted to come in between Hae Sook and Goong Chul she could have easily taken him to the place she works which she didn't. I think she took photos out of concern for Hae Sook and wanted to stop the Prof. What happened in between of course will be showed up ahead. But I believe with every episode, the story writing is becoming better.

The drama is getting better and this week had pretty strong episodes. I did like the ending scene with the four together at the beach, but this was the week I spent both episodes just wanting Goong Chul to get away from Jung Hae, Jae Hoon, and Hae Sook.

Man Shik died. Chun-bok has dementia. By the looks of the pills Chun bok's wife found at the bar, I wouldn't be surprised if Hae Sook has some terminal illness. It's a bit much.