Two women who married into a wealthy and powerful family must fight to hold true to themselves amidst the deceit and lies that surround them. One woman is hiding a secret from the world, and the other stumbles upon one in her own family.

Two women who married into a wealthy and powerful family must fight to hold true to themselves amidst the deceit and lies that surround them. One woman is hiding a secret from the world, and the other stumbles upon one in her own family. 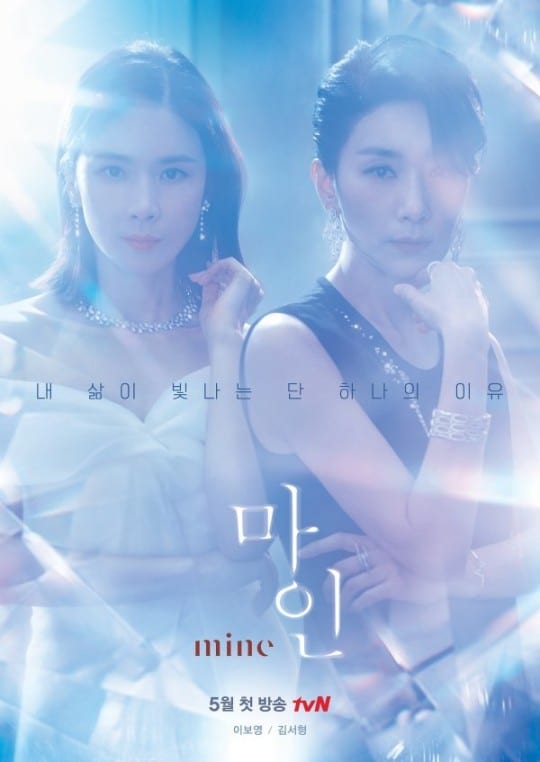 New promos have been released for tvN drama Mine, featuring the lead actors in a new poster and video teaser.

The drama stars Lee Bo-young (When My Love Blooms) and Kim Seo-hyung (Nobody Knows) as fellow daughters-in-law who married into the same powerful chaebol family. Restricted by a life and identity that was pushed upon them by society’s expectations, the story follows their journey as they try to reclaim what truly belongs to them.

In the poster, we see the two dolled up and bejeweled and the caption mysteriously says, “The one reason why my life is sparkling.”

The video starts with a slow spinning shot of Lee Bo-young standing in a dark and grey room. It transitions to a similarly spinning Kim Seo-hyung who stands in another dark room by a window. As the screen continues to rotate, we jump to Lee Bo-young and then back again to Kim Seo-hyung who each now stand in a dark dining room. Cut to a close-up of Kim’s serious expression which slowly turns into a smile as warm lights turn on behind her in tandem with her mood change. In contrast, Lee Bo-young starts off smiling in her close-up and her face grows serious as the background changes from grey to green lights. The teaser comes to a close with Lee’s narration, “The one reason why my life is sparkling. Mine premieres in May.”

Writing for the drama is Baek Mi-kyung, who has a curious list of credits including Strong Woman Do Bong-soon, Woman of Dignity, as well as Melting Me Softly. Directing will be helmed by PD Lee Na-jung (Love Alarm, Fight My Way).

tvN drama Mine is currently being planned to premiere next month in May and will be broadcasting on weekends.

I am very uncertain about this one. I am sure that there are expectations to being part of a Chaebol family but it is not like marrying into royalty. When one starts out wondering what the writer is thinking then the sensible thing is to look at the wrier and...the writer is Baek Mi-kyung- who wrote Melty. Uh oh- but wait- the same writer also wrote STRONG WOMAN DO BONG-SOON and WOMAN OF DIGNITY. The PD directed FIGHT MY WAY.

The actresses are proven and good- that is definitely on the plus side of the ledger.

I am trusting that this is a story, possibly Makjang, about family. I will give it a shot but with a sense of trepidation, sort of the drama watching equivalent of throwing the dice.

Honestly from what I’ve seen and heard of chaebol groups and families s, it sort of is like marrying into royalty. They’re very uptight, close-knit, sticklers for method and tradition, and consider outsiders marrying in to be disposable. The premise is interesting but it’s the people at the helm that worry me

This is when my straight Y chromosomes take over -- if the show was nothing but 16 hours of Lee Bo-Young translating a DMV booklet into Esperanto, I would still watch it. Happily.

Talk about a mixed bag of writing credits...

When I saw the 2 actresses, I was really happy. Then, I read the names of the last dramas of the writer... I hope it won't be a Goddess of Marriage bis, this drama was so bad.

I'm excited with this drama and I'm in! Two powerhouse actresses felt like this Kdrama a Korean modern soap opera. I watched a lot of scenes on 1980s American soap opera Dynasty and it resembled Joan Collins and Stephanie Beacham so we need Dynasty as an inspiration for this show.

Kim Seo Hyung is a force to be reckoned with on the screen. Her eyes convey such intense emotion. I haven’t seen a single thing by PBY but I’ve heard good things.

I really hope this isn’t too focused on the makjang plot lines a drama like this could have (pls don’t make it be another Penthouse). I hope instead it focuses on how women have to deal with the “family” and juggle their work and individual lives in the face of the sacrifices that are expected of them.

I love love the actresses in this, but the writer. I have actively hated and dropped all the dramas mentioned. This will be the last chance I give her or she will go the way of Kim Eun Sook. I will not be played any longer.

This combination is why I'm convinced the universe hates me.

Hey, let's cast two of Korea's finest living actors in a show written by someone who wrote one of the worst scripts I've ever had the misfortune to see on screen - at least the six episodes I slogged through before I slipped into an alcoholic coma and died.

I haven't been this bummed since they cast Jingoo and IU in a Hong's drama. Oh, maybe when they cast Jang Dong-yoon in the inevitable trainwreck that Joseon Exorcist was always going to be.

But at least that Hong sister's drama- thanks to a good director and a superb performance by the two leads- ended up being eminently watchable, even good, despite the flawed writing, just as Shin Hye-sun was able to carry off an even worse and more deeply flawed script in ANGEL'S LAST MISSION.

As you said these actors are some of the very best. That is why I will give it a shot.

Before it descended into adulterous angst, The Miracle We Met was pretty amazing, balancing the ache of bereavement with a very offbeat, almost bizarre sense of humour. On the strength of that I started on Melting Me Softly. Gave up after 3 eps. Sigh.

IMO Yeo Jingoo and IU are nothing compared to Gong Hyo-jin, whose extraordinary talent is actually diminished by the Hong Sisters' scripts.

Me:
Cast looks good
Synopsis is not generally my cup of tea, but with Lee Bo Young, maybe

Same reservations about the writer as everyone else. I actually have not seen ANY of those previous works. But really strong women characters and actors. And it’s tVN, so I know it will be at least REALLY PRETTY to see. Will this be an #imhereforthepretty for me?

Women of Dignity was a decent show in my opinion. It had just enough intrigue and melodrama to keep me interested in how it would end and it was OK.
The other shows by this writer attempted humor and romance and one was watchable but a little bit dopey and the other melted away and splash landed into complete idiocy.
Perhaps this writer should stick to intrigue and melo.
If these 2 actresses chose this drama, I'll give a go.

Woman of Dignity is near the top of my all-time-best list in K-drama, so this two-actress pairing with this writer is good news for me. No expectations, though, the way scripting in dramaland has been going.

The actresses can certainly deliver. But even the best of actors can come across as boring and dull when involved in a project with bad writing, directing, etc. ..... However, sometimes shows comes along that unexpectedly and pleasantly surprise us. This may be one of those. We'll see.

I'm glad I'm not the only one who's skeptical haha

I adore Bo-Young and I fell in love with Seo-Hyung after watching her in Nobody Knows, so even if the writing might be meh, I'll try to stick through for these two~

I adore Lee Bo young, but this writer won't do.
Think about the disaster that Melty was?!!!!
So upsetting!!!

If there was any Justice in this world, this would be gay.

And also, why did it have to be this writer? WHY??

If there was any justice in this world, this show would be gay.

But also, why did it have to be this writer? WHY??

Lee's subtle smile that turned to a subtle frown reminded me of the end of IU's music video '8'. The shot of Kim standing in front of a doorway with shelves on either side reminded me of door to the cellar in 'Parasite'.

I will give this writer last chance only for these two actresses. If writer still manages to mess this up, this drama will join my list of - colossal waste of talent along with Sisyphus and the writer will enter into another list- avoid at any cost.
I am hoping this will be good, I can not handle one more Sisyphus. One is more than enough for this year.

I have always wanted these two actresses to be in the same drama as headliners and now it is happening I'm both thrilled about the prospect but also nervous because of the writer. I know great actors can make bad writing palatable but unfortunately that is my low bar of expectation going into this one.