When a corrupt prosecutor gets in an accident and wakes up in a coma, she's mistaken for a woman who looks exactly like her: an engaged chaebol heiress in the middle of a succession war. The woman tries to fall into the new life around her, but she does not act as her doppelgänger would.

When a corrupt prosecutor gets in an accident and wakes up in a coma, she's mistaken for a woman who looks exactly like her: an engaged chaebol heiress in the middle of a succession war. The woman tries to fall into the new life around her, but she does not act as her doppelgänger would.

The drama stars Honey Lee in a dual role, playing doppelgänger characters who come from very different backgrounds. The main personality we seem to follow in the story is the corrupt prosecutor Jo Yeon-joo. The only daughter of a gangster mob boss, she tried to follow a more righteous career path by becoming a prosecutor, but ultimately falls to the sweet temptations of bribery. When she loses her memory after getting into an accident, she gets mistaken for her lookalike: chaebol heiress Kang Mina. Now, she finds herself in the middle of a succession war between Kang’s in-laws.

Lee Sang-yoon takes on the part of Han Seung-wook. Although it was arranged by the families, he was happily engaged to Kang Mina and the two were in love. However, when his father died, the “crown prince” position went to his uncle, and Lee Sang-yoon was no longer a direct heir. As a result, the engagement was re-arranged and his uncle’s first son married Kang Mina instead.

The newly released teaser starts with Honey Lee enjoying drinks at a club as she wonders, “A gangster and a prosecutor, what common ground do these two have?” Cut to Lee fighting as she yells, “How dare you look down on me, do you know who I am?!” Running into Lee Won-geun at work, Honey Lee explains, “I’m the veteran who carves the baseball bats for the Central District Prosecution Office. Because I’m authority’s meerkat.” The teaser then jumps to a text screen that says, “Is she a prosecutor or a gangster? Level of misconduct 100% corrupt prosecutor.”

In the next scene, we see a car gunning towards Honey Lee and crashing into a tollbooth. An angry man’s voice cries out, “What crashed!?” and the scene cuts to Lee waking up in the hospital asking “Who am I?” Getting out of the car, she looks befuddled at her surroundings and tries to make sense of everything, “So, you’re saying, I’m Kang Mina and I’ve become a chaebol heiress?” The text screen explains: “Waking up to find that you’re a chaebol heiress! But something is strange?”

The camera pans around, showing photos of the deceased family members at a funeral while Honey Lee looks on despondently. She overhears her in-laws talking about her, and an older gentleman says, “Even if something did happen to her while living in our house, is there anyone who would care?” We then cut to Lee getting into another fight, confused about her skills, “Huh? How can I fight so well?” Her attacker responds, “Then, did you think you weren’t a good fighter when you were the soon-to-be successor of the Nam-moon gang?” The text screen that follows reads: “Why are you all being like this to me! The double identity that’s risking her life.”

We next see Lee Sang-yoon meeting with Honey Lee and he immediately becomes suspicious: “Who are you? Where’s the real Mina?” Without an answer, Honey Lee becomes frustrated and throws a hysterical fit at a church. The teaser then comes to a close as she screams, “Who am I? Who am I!”

On the production side, PD Choi Young-hoon (Good Casting, Second to Last Love) sits in the director’s chair, and scripts will be penned by writer Kim Yoon. SBS drama One the Woman premieres next month on September 17, and will be taking over the Friday-Saturday timeslot following Penthouse 3. 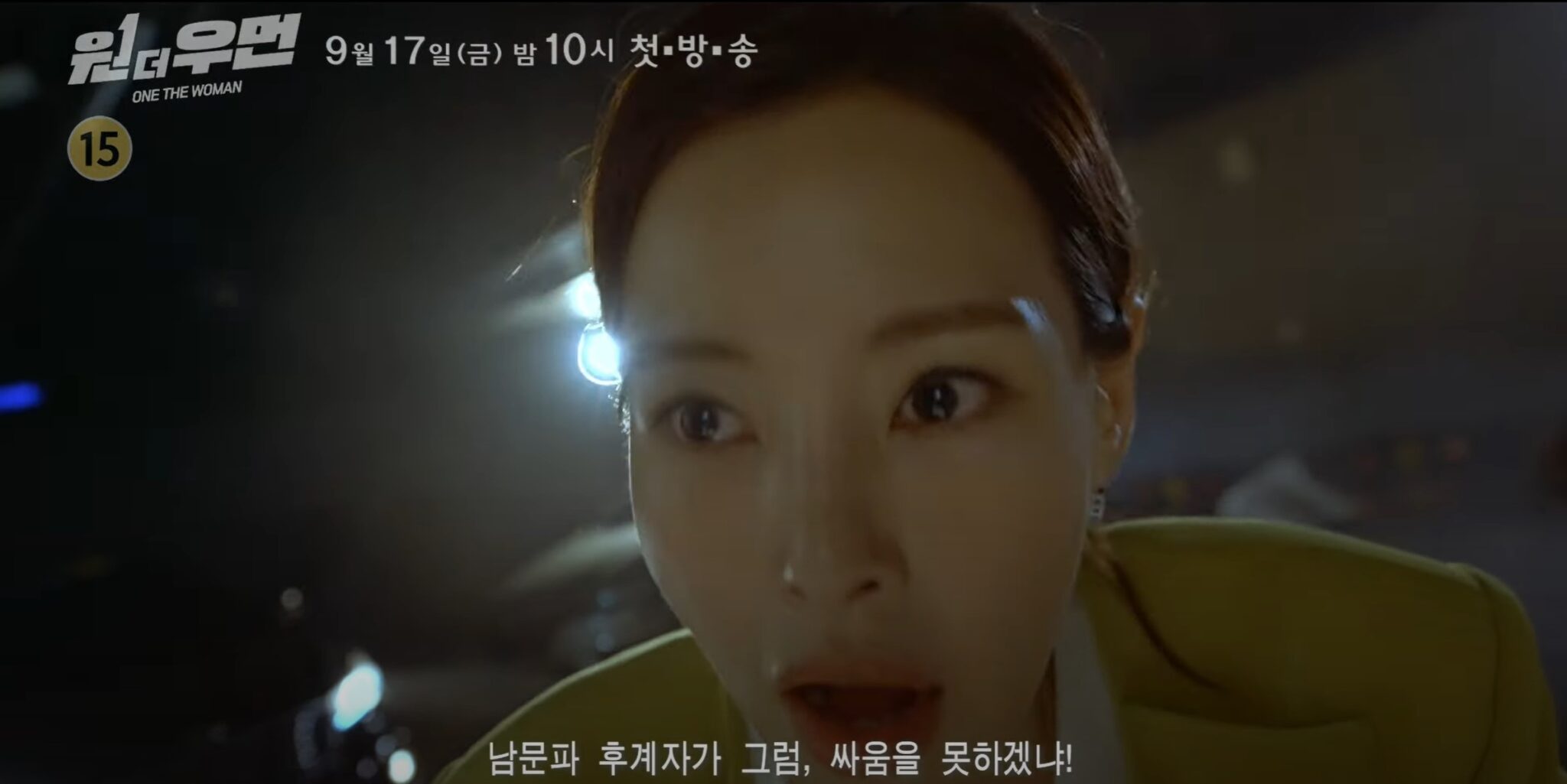 Nonono. Obviously the title must change to “Authority’s Meerkat”.

She seems to be playing similar role to her last one here.

I'll watch anything with Honey Lee and Lee Sang-yoon. Cannot help myself.

Sounds interesting, I'll give it a shot.
However, the title gives me great grammatical cringe.😣 What is it trying to convey? I interpret the hangul more like One more Woman but my Korean is unfortunately very basic, can anyone enlighten me? I support @bbstl suggestion.

Drama centred on “double identity” in which the title played on the wording to suggests , One (of) the women is a “Wonder Woman”. Hence, merging the two meaning to “one” is a “one the woman”

and the clever bit is what @vax says below

Okay, the plot seems pretty uninteresting to me. When Honey Lee, shrieks at the end, “who am I?”, I would be amazed if the shows hands over her an epiphany from Kungfu panda, like okay, I am a prosecutor, gangster and chaebol. I am all three. I am honey Lee 😂