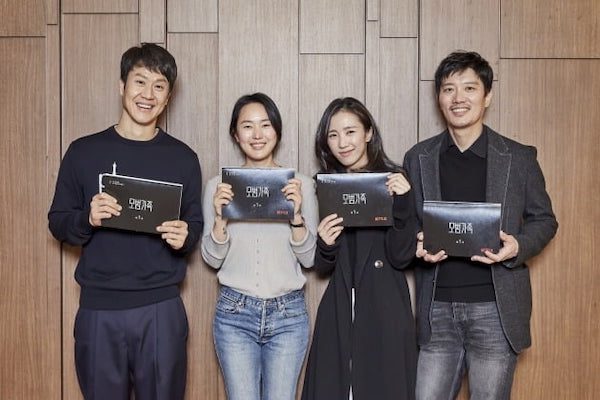 Upcoming Netflix series Model Family has announced its final casting lineup. Jung Woo (Mad for Each Other) plays the lead role of Dong-ha, an ordinary breadwinner who is on the brink of bankruptcy and divorce. One day, he discovers an expensive car and becomes entangled with the second-in-command of a drug ring (à la Breaking Bad).

Park Hee-soon (My Name, Beautiful World) plays Gwang-cheol, the ruthless second-in-command who coerces Dong-ha to become further involved with his drug operations. In contrast to Dong-ha’s character as the household head who lives for his family, Park Hee-soon’s character seems cold-blooded and only interested in protecting his money.

Yoon Jin-seo (Jackpot) plays Jung Woo’s wife, Eun-joo, who has a hidden secret. Park Ji-yeon (Hospital Playlist 2) plays Joo-hyun, a police investigator in the vice and drugs department, who is tasked with pursuing leads on Dong-ha and Gwang-cheol.

Suits director Kim Jin-woo is attached to this project and Production H (School 2017) will be producing. Model Family will air on Netflix in 2022.

I thought it would (could) be something like "my unfamiliar family", but I was sooooooo wrong..
This plot seems to be too dark for my taste... But ideal for Netflix😂😂😂😂😂

I think you might have me at Breaking Bad :p

I see them so smiling in the picture that I can't help but think that it will be a comedy (hopefully), although it doesn't seem like it from the description.

I like the cast and plot - and it’s a Netflix production, right? I’m in.

sounds good. time will tell if it is too dark for me

Trash Oppa (Jung Woo) is one of the leads? I'm in. Looks dark but I'm sure there will be comic moments.

I so loved Jung Woo in Reply 1994 and Mad For Each Other. Like others I hope this is not too dark.