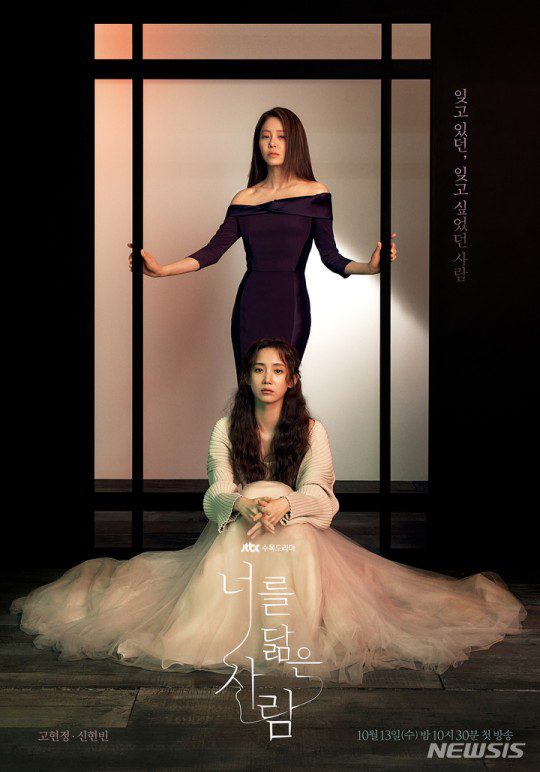 New posters have been released for JTBC’s upcoming melodrama Reflection of You (formerly Someone Like You), featuring lead actors Go Hyun-jung (Neighborhood Lawyer Jo Deul-ho 2) and Shin Hyun-bin (Hospital Playlist 2).

The drama stars Go Hyun-jung as Jung Hee-joo, a married woman with children. While she recognizes her role as a wife and a mother, her priority has always been her own self-identity, and she never neglected her personal ambitions. She has always been the main character in her own life, but her status begins to shift when she encounters Shin Hyun-bin. Slowly, Go Hyun-jung finds herself fading into the background as Shin Hyun-bin’s character takes over the limelight.

In the newly released poster, this theme is captured visually, with Go Hyun-jung standing behind Shin Hyun-bin. Although Go’s silhouette clearly stands out in her snug black dress, at the same time she seems trapped inside the window frame behind her. In contrast, Shin Hyun-bin wears a flowing white dress, which fans out around both characters. The tagline reads: “The person I had forgotten… had wanted to forget.”

The second poster shows Go Hyun-jung alone inside an art studio. Wearing a long red dress and holding a palette knife, she stands in front of a large canvas while looking back at the camera behind her. One corner of the canvas is slipping off, and there the tagline reads: “The start of my story is…” 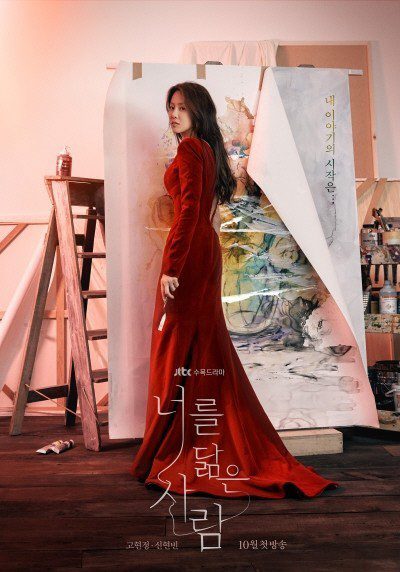 Sounds interesting and JBL writer is a plus. Let's see how it turns out

Love the cast. Love the writer. The Posters are pretty good too.

I'll have to give this a try just for her.

In May 1995, at the peak of her career, Go married Chung Yong-jin, vice chairman and CEO of Shinsegae Group and grandson of Samsung founder Lee Byung-chull.

I've never seen Shin Hyun Bin in anything except Hospital Playlist, so it should be interesting to see her take on a new role. She seems so fragile to me even though she is closer to 40 than 30.

I thought she was fine in Mistresses. But I think we'll finally know whether Shin Hyun Bin can act when she's next to Go Hyun Jung.

Casting her to upstage Go Hyun Jung is some interesting choice but a sign of confidence in her. I’ve her in the movie Sunset My Hometown where her role couldn’t be more different from that in HP - as a sexy man eater.

She's cast in a lot of upcoming big projects. She's been working since 2009, & got noticed for playing a migrant worker in a film. It always fascinates me how the K-industry all of a sudden gives many leading roles/big stuff to actors in their mid to late 30s. Its something interesting to me, b/c usually its the opposite (younger people get the roles).

Shin Hyun Been seems introverted in rl, even in her few interviews, she seldom talks nor about herself too. She's mysterious which I dig. Her ultimate test could be here or the new SJK show where she's the FL. If she does well here, she'll get big praise, since the FL here is a big time veteran. All eyes on her I suppose.

I like her poise in interviews too. She’s usually so careful and insightful with her answers, and in bts clips you see that she laughs so easily, it’s cute. I hope she delivers. Both here and in the SJK show.

Same. I find it refreshing to have calm and chill personalities like her in Korea. Well, at least in my view, she seems level headed and smart. I think its smart imo, for her to keep it short with her interviews.

Very curious for her SJK drama as well, she'll probably get the Netflix treatment (interviews/promo), of how she'll do her interviews lol. Plus, she has a graceful and elegant vibe to her as well. Hope she can bring it!

I’m looking forward to this, although the latest synopsis I’ve read makes the drama sound more melo than I expected. Love the posters too.

PS. The tusk-like S “ㅅ” in saram 사람 in the poster keeps bothering me…

Go Hyun Jung looks ravishing! She's a legend tbh. I also want her/this show to succeed so she can stick the success in revenge for Return/Return's PD. Ha, as they say success is the best revenge!

Looks weirdly like All About Eve in the Korean art world or something, with Go Hyun-jung and Shin Hyun-bin in the Bette Davis and Anne Baxter roles respectively.

Shin Hyun-bin overshadowing *the* Go Hyun-jung? That shows enormous faith in her acting ability. Not that that’s unwarranted, she’s quite talented in her own right. I’m just not completely convinced she’s on that level. But I do appreciate projects that allow newer actors to shine, so I’m definitely intrigued.

Just as importantly for me, it’s the writer of my all-time favourite Just Between Lovers, which makes it a must-watch no matter what. The posters have also been stunning. No one does it like Go Hyun-jung.

I agree with you- the combination of Go Hyun jung and Yoo Bo ra make it an absolute 'must watch' even if the drama subject matter sounds a little too melo.....

i can agree with this..

She is horrible in Hospital Playlist