Two long-time friends — one a lyricist and one a photographer — realize they have romantic feelings for each other when they must temporarily share the same home.

Two long-time friends — one a lyricist and one a photographer — realize they have romantic feelings for each other when they must temporarily share the same home. 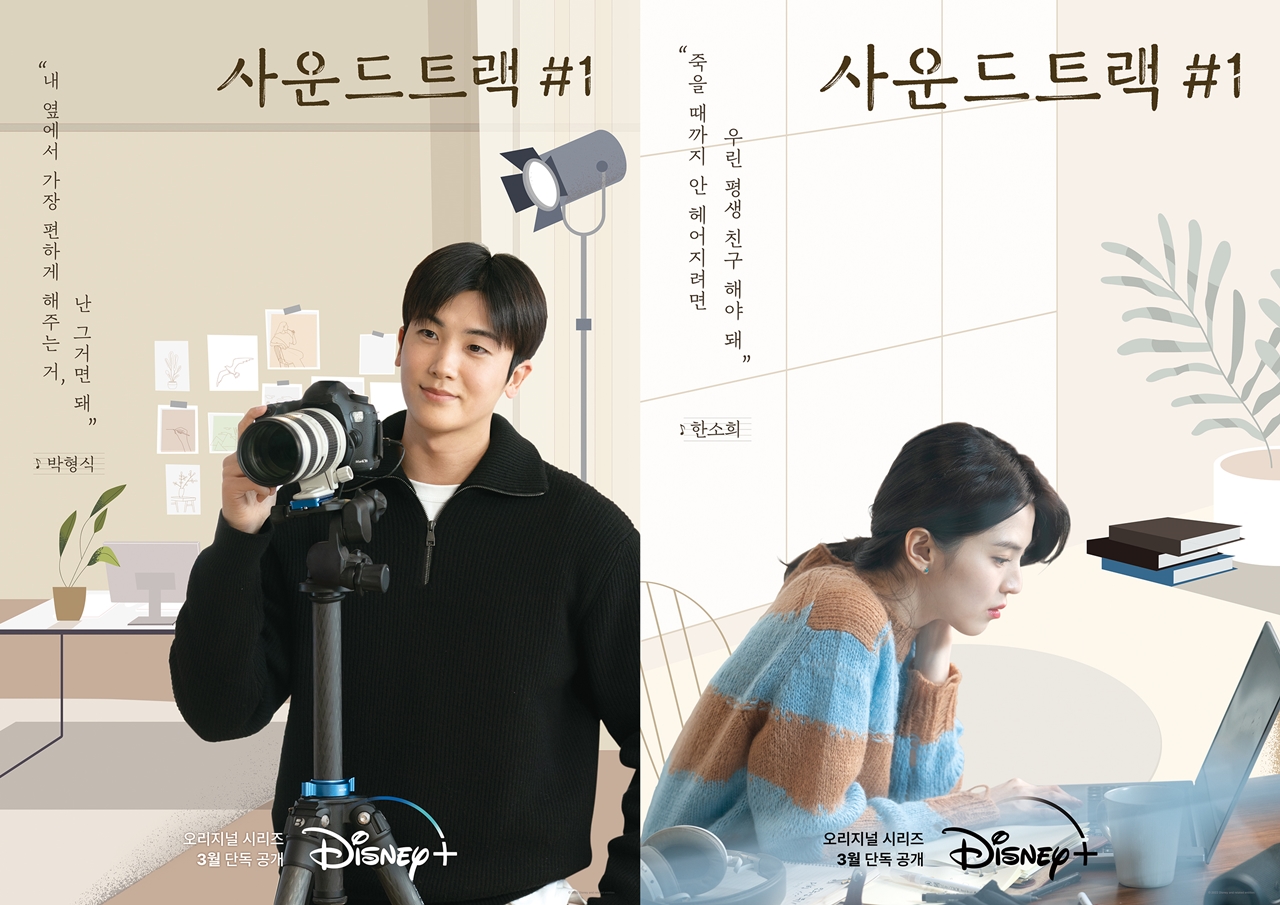 Disney+’s upcoming drama Soundtrack #1 has released new posters and a set of character teasers. In a story about music and romance, Park Hyung-shik (Happiness) and Han So-hee (My Name) play two close friends who have known each other since childhood.

As these things go in dramaland, Park and Han end up living together for two weeks, and this leads them to realize there might be something more between them than friendship.

The first teaser is from the perspective of Park Hyung-shik’s character, photographer Han Sun-woo. Approaching his camera, Park tells Han So-hee that he’s taking the photo and Han asks afterwards, “Did I come out pretty?” Park responds nonchalantly, “You look the way you look,” and Han grabs him to demand, “Look properly before you answer.”

The teaser then cuts to Park Hyung-shik noticing Han So-hee through the window, and he takes a photo of her as she works. In the sequence that follows, Park stares at Han’s photo on his computer, smiles as she tries to win a doll, and wraps a scarf around her neck when it’s cold. We hear their conversation in voiceover with Han saying, “Tell me, then, why you can’t confess your feelings.” Park explains, “It’s not that I can’t. I’m choosing not to.” She then asks, “Because you might get rejected?” And he replies, “It’s not because I might get rejected. It’s because I might lose them.”

We then jump to Park Hyung-shik happening to see Han So-hee having dinner with a man, and on the text screen we read, “Since when did it become love.” The teaser comes to a close with Park watching Han walk away and he remarks, “If that’s Eun-soo’s heart, then I truly and sincerely support her.”

The second teaser takes Han So-hee’s perspective — she plays a freelance lyricist named Lee Eun-soo. Han admires the falling snow and asks Park Hyung-shik if he knows anything about unrequited love. Unamused, Park asks, “Were your lyrics rejected this time as well?” and we flashback to Han So-hee getting desperate and pleading with a man. Returning to the present, an upset Han slams the table, “I’m so frustrated! Is a crush such a big deal?! Why do I have to feel hurt and sad?” Dejected, she leans her head on Park and he says, “You’re sad because there’s nothing you can do about it.”

The teaser then cuts to Han So-hee working hard as she listens to music and scribbles down notes. Going through her notebooks afterwards, Han comes across an old photo of herself and Park Hyung-shik. Her face becomes thoughtful as she notices the devil horns drawn on Park’s head, which are accompanied by the word “dummy.” Jumping briefly to a text screen that reads, “Are we friends or are we in love,” we return to Han So-hee who sits with Park at a desk. The teaser ends with her question to him: “Do you want to stay with me for two weeks?” 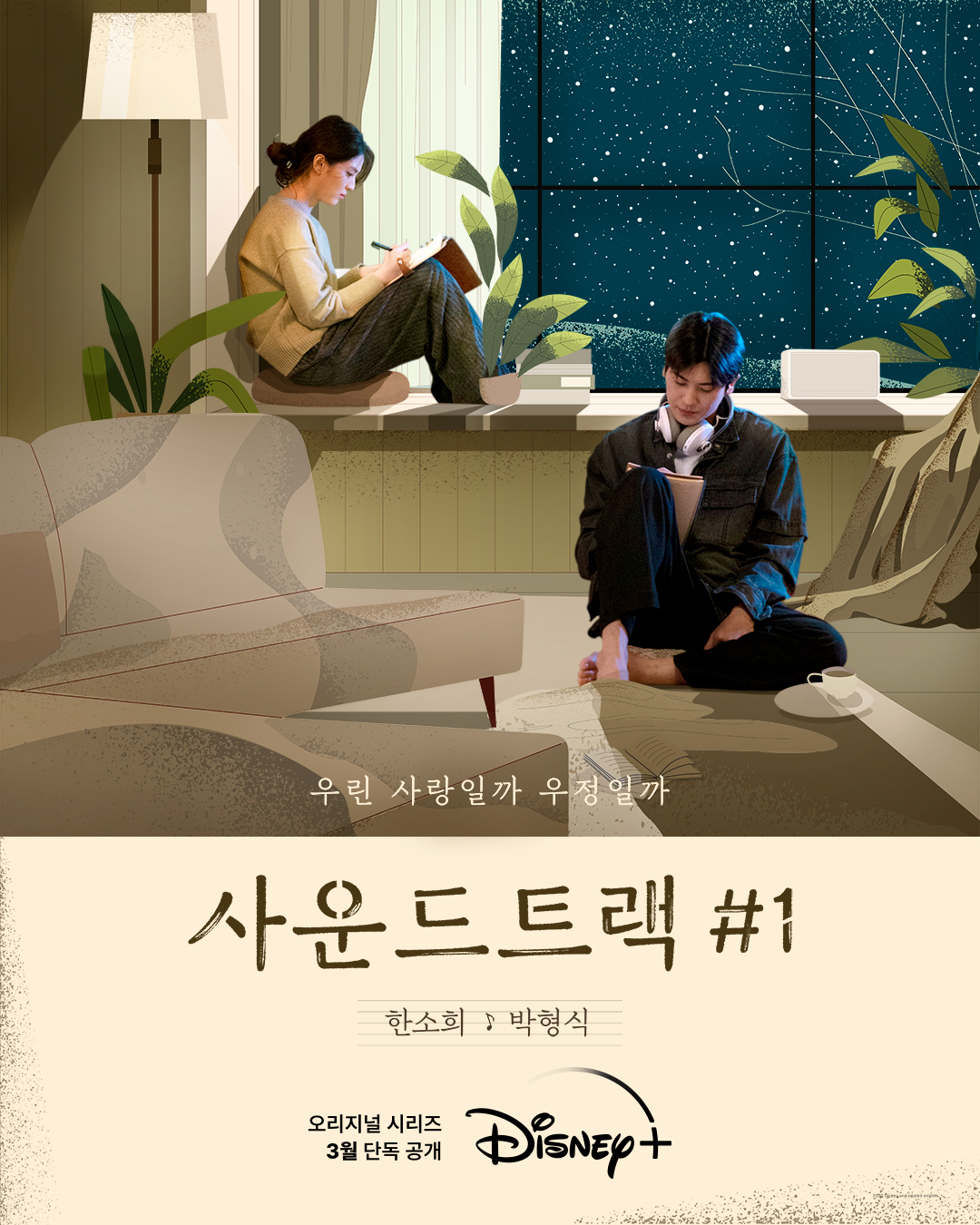 I really like this PD! The story looks nice, I love friends becoming lovers theme.

My only issue is why Disney+?

Because Disney bought the rights and paid for production. It was a smart decision to move into kdramas. But aggravating to the rest of us.

I don't why they're blocking their Kdrama to rest of the world.. .It doesn't make sense...

I agree- it is a foolish decision following a wiser one. It is part of why I dislike Disney- because this is so characteristic of their decision making.

I'm sold just on the PD.

I can’t keep up with the KDrama inundation. I am still thinking why is YiHyun here, where is Saebom, and are the zombies coming? Aigoo.

Tee hee, I thought the same. Like, who is this new girl?

Just, 😒 Disney. Wonder how long it will take them to stream it in the US?

My question also- and how can we be alerted when it happens?

Meanwhile, when my friends (used to) crash over, it was chaos everywhere. No cute cohabitation hijinks, just a mess with some fun on the side.

I think I have seen too many of Han So Hee's one-note performances, and too much of her IRL persona in her interviews to ever get convinced she's the gal who's best-buds with a dude. Sorry. Speaking from experience, the vibes don't match, lmao! :P She's brilliant in other genres though, so I hope she keeps sticking to that! ^^

Friend to Lover story is as fairytale as Cinderella story or like alien and vampire (hah) to me and that is why I like it.
Watching drama is not because it imitates life but because it is the opposite

After Happiness, I need my PHS hit hehe
And after hearing good things about HSH in My name, I'm even more excited to check this out!

Wondering when Disney + will let me watch this.