Kim Sun-ah returns to television in I Am Legend 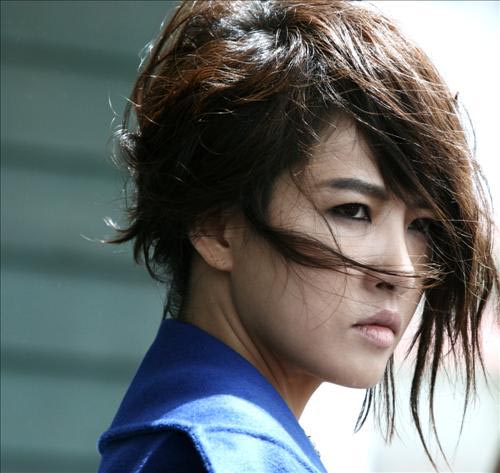 A year after her last drama, the successful SBS series City Hall, Kim Sun-ah is returning in a new drama, I Am Legend [나는 전설이다]. The title is a pun on her character’s name, which is the word for “legend” (kdramas really love name-title puns, don’t they?).

In I Am Legend, Kim Sun-ah plays the wife of the youngest partner at Korea’s top law firm and the daughter-in-law to a distinguished judge. In her high school days she ruled her neighborhood, but in order to support her younger sister she began working at a law firm as a clerk, where she lured a promising young lawyer and married him. However, after being looked down upon and treated poorly by her husband’s family, she takes on her well-to-do in-laws and files for divorce. Afterward, she embarks on a new life by rediscovering her talent in music; she’d once been a “legendary” singer of a rock band in high school, and now sets out to form a new group.

Kim has famously played some free, open-spirited personalities (My Name Is Kim Sam-soon, City Hall), but as the daughter-in-law of a prestigious family, this character will show the actress’s own sexy and refined side, as well as her hitherto-unheard singing skills.

The series is a Wednesday-Thursday drama for SBS, directed by PD Kim Hyung-shik (Surgeon Bong Dal-hee) and written by Kim Yoon-jung (When a Man Loves, Star’s Echo). The production is currently casting her male lead, with whom she’ll have a romantic storyline after her divorce.

Tags: I Am Legend, Kim Sun-ah

Now this is a drama I want to see
Kim Sun-ah yay!!!!!!!!!!!!
sounds pretty interesting in I can see her totally pulling it off

KSA is awesome, she totally rocks!!! I can see her being really great in this drama. As if she could be less than great.

A new drama by Kim Sun Ah? Have waited a long long time for her return. This is indeed good news and I'm looking forward to see this remarkable actress on the screen again. Wonder who her love interest will be ...... ???

Wow! She looks fierce and beautiful!

Wishing CSW as the male lead, would be wishdreaming.
But I would like to see her either with Joo Jin Mo ( he has a great voice, too). Jo Han-seon, Jang Hyuk or with Lee Seo Jin ( whom she porbably would no play with as he is her best friends ex )

i am waiting 4 her new drama. and waiting 4 recap javabeans. KSA fighting!!

Gaaahhh.. too bad it's not gonna be CSW as the male lead, he signed up for IRIS 2. Hopefully, whoever the male lead is, has a gread chemistry with her just like in City Hall.

I totally see her as a rock star! Love it!

The waiting's over. Suna as a rockstar is a must see.

she can pull anything off. so, so awesome. epic male lead, please!

Rain in a flash !

So. Excited. To see her as a rock star.

Of her past work, I've only watched MNIKSS and CH, but after rewatching MNIKSS, I'm about ready to join a fan club or something. What gets me amped for this is that it would be nice to see more of her badass side. Not that she doesn't have a badass side in these dramas (especially MNIKSS, Sam Soon was one powerful lady) but idk... a role that's really in control, if that makes sense.

I thought her singing voice in MKIKSS was a bit affected.

I'm rooting for Rain too! =D

This sounds fun. I've only seen Kim Sun-ah in MNIKSS, but I pretty much loved her in that and this role sounds so totally different that I can't wait to see it because I'm pretty sure she can pull it off.

dangggg!! this is AWESOME! i'd love to see kim sun ah rock it out.

but the sad thing is my dreams of seeing her in ATHENA by Cha Seung Won's side are now dashed... :'(

KSA's music abilities may not be well known, but she is a musician by training in fact, having attended one of the best music schools in the united states (ball state's school of music- piano major), though it is probably not as well known as the more famous heavyweights like julliard, eastman, nyu, and ne conservatory.

I wonder if her husband/ex is a jerk because when reading the synopsis, I kind of feel sorry for the poor guy. He was lured into marrying her and when things get tough, he gets kick to the curb.

Kim Sung Ah was going to debut as a member of g.o.d instead of an actress, but when Sidus hired JYP to produce g.o.d, he decided to debut the group as an all male group instead of a mixed group! :D
Kim Sung Ah probably knows how to sing a bit. I know she plays piano very well.

I tried her singing before, I have to admit that it's a bit...uhm...sour!
Anyway, I'm looking forward to seeing this, the story sounds interesting, I like it when daughter-in-law gets back on her own and surprise all the husband's family (especially the husband).

i always love kim sun ah. she's one of great actrees. can't wait to see her in this drama...;-)

rain?? it's not a bad idea. i've been wondering when they're gonna do drama together. coz i love seeing them together in newspaper prank back then and when ksa did tango dance in rain concert...:)

I hope the band is all female like the Runaways.

I'm going roll the dice and give my predictions:
Male Lead: Another music star; their manager is a newbie; there will probably be some younger male superfan. But I'd still watch the heck out of it.

I thought it was going to be another drama about lawyers until I reached halfway through the post. lol. Rock music makes it so much more interesting. :)

Waaaaaaaaah, this is the day I`ve been waiting for. I`m quite surprise about the story line of this drama.
KSA joining a law firm turned rock star....wow, that is something to look forward too. I`m a big fan and I know she will undergo some training before she will rock our world. KSA, never want to pretend, she always transform herself into the character that she will be playing , so if the role ask for a singing voice, then, she will turn herself into a singer.
I saw her TV-sitcom Jump and there is a scene there that she was a rock singer.
So I can see how Suna would look like in this drama....cooooooooool!
I`m so glad the waiting is over! I have to TV drama to look forward too this year, I`m a legend and Athena. Next year City Hall 2 (wishful thinking)

Since Korea is all about pop music, I'm so looking forward to seeing KSA as a ROCK star! How refreshing. Hopefully the OST will contain actual rock music. Hehe.

I know this is a long shot, but I would love to see a Gong Yoo / KSA reunion! I can only dream....

wow! Kim Sun Ah! sooooooooo excited to watch her on drama again! and now as a rock star? so sool for Kim Sun Ah! cant wait to see what Kim Sun Ah and the drama has to offer!

I don't know how I feel about this new project yet... but if we're talking partners, Rain would be good, but like RunLolaRun I'm hoping for another Gong Yoo/Kim Sun Ah team up. :D

*sigh* I would have loved to see her as a bad girl in Athena.

Lawyers and rock bands?
How random!!!
It seems interesting, not hugely attracted by Kim Sun Ah though.

Well, she used to be debut as the only girl in 'god 6' under SidusHQ. The group that known today as g.o.d. But she been dropped out before the group debut. Can't wait to see this.

I am really excited to see this one!! I love Kim Sun Ah in CITY HALL and she looks really great now. I wonder what she's doing to get into shape.

This is great news! Thanks to alodia, who texted me earlier, and I'm more excited now just by reading this from your blog JB! Though, i'm also wishing Suna to be in Athena, now anything is ok with me, as long as i can see her onscreen again! I thought she's going to make a movie? I hope she will, and do City Hall Season 2 with Cha Seung-won!

I love her, look forward to it!

Yay hooray. Congrats to KSA for her new project. She's gonna rock it! (hehehe). I'm anxious to hear who her male lead will be. A big name star in his thirties (unless they want to bandwagon on the noona craze like PT, SMM, OML, etc. and go with a guy in his twenties) - who who can match the fiery intensity of KSA? Perhaps Uhm Tae-woong? Park Yong-ha (btw, I'd pick SJS but he's busy with Road # 1).

Something to look forward to! Kim Sun-ah the Rock Star is going to be HOT!
@Sunshine, sueyip & saye: Rain as the male counterpart will be interesting! (I watched this Korean show uploaded on YouTube where they were both tricked of wanting to date each other. They were so cute)

the return of the one and only, saucy siren KSA!!! YAY!

i'm with BellaMafia and kaedejun though-sad she isn't going to be starring with CSW again in either "Athena" or "I Am Legend"...boo. BUT YAY still!!!

Now this is GREAT news! Wow! Exciting news and Kim Sun Ah is one FINE lady....a great actress and so very talented!

the first face that came to me as her husband is the 2nd male lead who was in FULL HOUSE with Rain. I think he would be an excellent choice. The male lead could be a toss up and I will leave that one alone!

KSA as rock star...great! With Gong Yoo, even better!

KSA rox! Can't wait to see her. I vote for Ji Hyun Woo as her male lead.