Joo-won makes his return to dramaland from the army 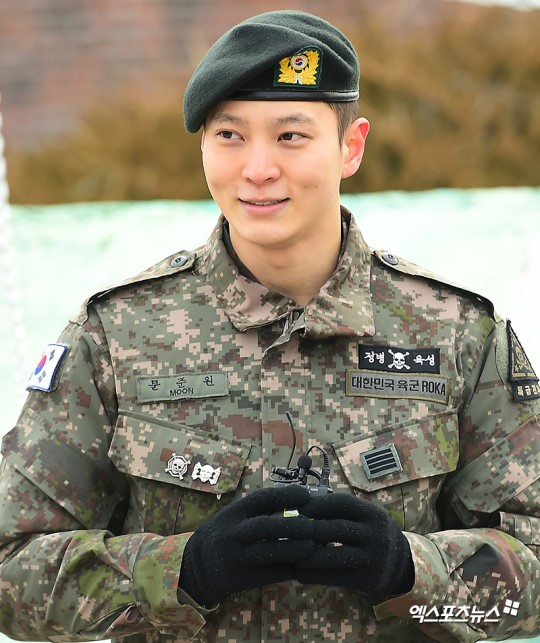 Happy Lunar New Year, everyone! And what better way to ring in the new year than to welcome back from army duty the first of our ‘87er leading men: Joo-won (My Sassy Girl) has officially returned to the civilian world today (February 5), a full ten days earlier than previously planned.

Whenever I see the news about military discharges, I always simultaneously think, “Has it really been almost two years?” and “It’s been too long since I’ve seen you in dramaland!” By all accounts, Joo-won flourished in the army, shooting straight to the top of his class during basic training and becoming a drill instructor later on. But I’m glad we’ll finally get to see him out of his army uniform, though he hasn’t chosen his next project yet.

I personally have had some love-hate relationships with his past dramas, but his personal charm and charisma always sucks me in, at least for longer than I would’ve stayed without him as leading man (see: Naeil’s Cantabile, Yong-pal, My Sassy Girl). Well, let’s just hope Joo-won chooses his next project (please be a drama, please be a drama…) and soon! I don’t know about you, but I can’t wait to see him back on my screen!

I hope it would be something badass. Nothing against rom-com but I feel like he suits badass roles better.

Wasn't he in Bridal Mask? That was a really excellent drama.

Yep. I want something as badass as that~

I wanted to see Bridal Mask so bad, but it's hard to find. I first encountered Joo-won in Bread, Love and Dreams. Then saw Good Doctor and Sassy Girl.

You can watch it on netflix

How many streaming providers can a person subscribe to? I did see it was on Netflix--but since I'm only interested in Kdramas Netflix isn't my first choice for a subscription. Google Play is better.

Or you can check the link on my fan wall.

I hope it helps

check kissasian.to hope this can help

I swear I was happier about his dischargement more than all the Lunar New Year's feasts & goodies! 😊😋

what a pleasant surprise! i hope he gets back to business soon as he can! i haven't loved all of his dramas except i watched all of them cause actors like joo wan can make the worst situation seem better just with his acting. and his smile

Thanks for the happy news, @tipsymocha! I'm looking forward to seeing Joo-won back on any screen. ;-)

GAKSITAAAAL! ❤️
This reminds me I still have to watch Good Doctor. It's been on my list for ages.

GAKSITAAAAL!....And more like this, please! As someone above stated, he's better in the badass roles than the rom-coms, imo. One of the very first dramas I watched was Gaksital and it blew me away! Gulp, now I wanna re-watch.

btw, I don't think I ever finished Good Doctor. I didn't like the way she treated him.

Yes, the one and only good doctor. 🎉 Sorry Freddie Highmore.

I didn't make it past the first couple of episodes of the American version. I also thought that Joo Won's version was much better than the Japanese version.

Always glad to see a talented actor return from military service! I wonder how soon he will launch into a new project.

I've been looking forward to today (not that I'm counting or anything).
Seriously where are the confetti and fireworks??🎊🎉🎇🎆
But I thought they always choose dramas as comebacks??

Nice to know he's back to civilian life. Looking forward to his return to dramaland.

All these people whom I’ve never seen are coming back this year! I did watch the first episode of The Good Doctor though. Looking forward to a year full of new actors (to me).

Now that I think about, I am not sure if I have ever completed any of his dramas...and yet I still love him. 🤔

eh, are you me?? ;) I was thinking hard what drama had me like him a lot, I know that I only see snippets of Nodame, My Sassy Girl, YongPal, some episodes of Baker King and Gaksital,,but the whole episodes? then dang! Ojakyo Brothers come to mind :D I love him there, and I loove the show, even rewatching some episodes several times, the only more-than-24episodes drama other than Dae Jang Geum that I can complete, I’m sure it was partly because of Joo Woon’s talent and, ahem, puppy eyes :)

His only drama that I really didn't like was "7th Grade Civil Servant, where unfortunately everyone like acted like they were in the 7th grade in school. But I loved him in Ojakgyo Brothers (on of the better family dramas), Bridal Mask (a truly gut-wrenching drama) and even his immature character in King of Baking, Kim Tak Goo (really enjoyed his totally messed up/dysfunctional romance). I also liked Naeil's Cantabile (too bad they screwed up the final episode) and the Good Doctor. But I agree that both My Sassy Girl and Yong Pal were just so-so. Hope his next drama is as good of his first 3.

i LOVED him in Ojakgyo Brothers! probably one of my all-time favorite family dramas. fingers crossed he gets a quality drama worthy of his acting this time around :)

JOO WONNN
one of my bias
welcome back!

13 Katakwasabi wants a Frodo plushie (the kakao emoji, NOT the hobbit!)

Welcome back joowon-shi!! Grace us with dramas, movies, photoshoots and ads 😄

I have a question. Why do most celebrities going back from army duty look different than before they entered army duty? They look more confident yet grounded, and they look more manly too (nothing to do with the uniform though).

I can imagine two years of army or any other militaire duty is an extremely tough job that can change anyone physically and mentally. Props them.

Oh.. this is such a great news! I loved Joo Won in Ojakgyo Brothers when he truly shone for the first time, and loved him even more in Yong Pal even though the plot was quite scattered in the second half of the show. Can't really believe that time did fly! Welcome back and looking forward to seeing more of you in good projects!

Time flies - well, maybe for us, but maybe not for Joo Won during his military stint. Anyhoot, I hope we can welcome back to kdramaland soon. :) \/ ♥

Gaksital is back from the army? *smirks and raising one eyebrow* Bingo... now to await his next project.

(am excited, if you can't already tell heh)