Jang Hyuk, Sooyoung go after serial murderer in OCN’s Tell Me What You Saw 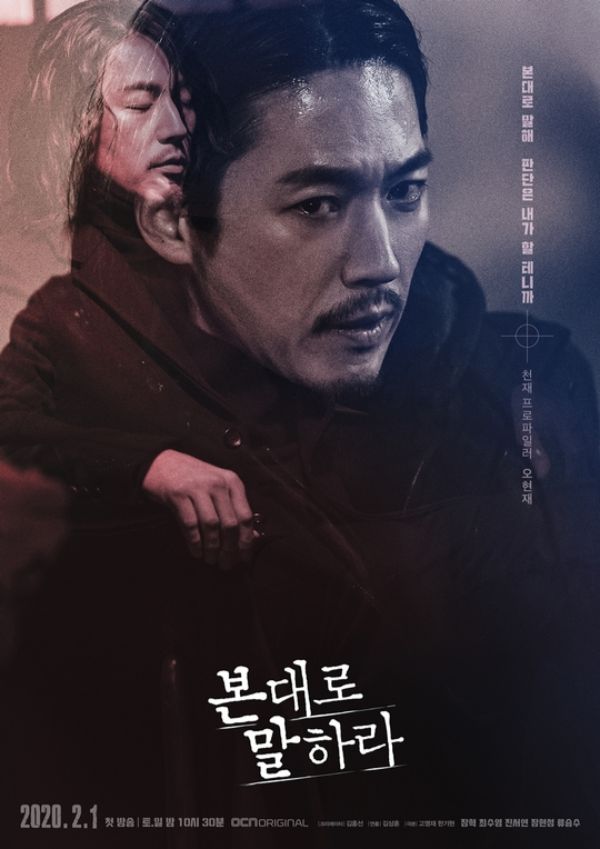 Upcoming OCN suspense-thriller Tell Me What You Saw has released five character posters of Jang Hyuk (My Country), Sooyoung (So I Married an Anti-fan), Jin Seo-yeon (Eve’s Love), Jang Hyun-sung (VIP), and Ryu Seung-soo (Secret Boutique). Jang Hyuk stars as a police investigator who has lost everything and disappears from the world for a while. His direct personality shows through in his poster’s copy: “Just tell me what you saw. I’ll make the judgement.”

He comes back after being introduced to Sooyoung’s character, a rookie on the investigations team through the team leader, played by Jin Seo-yeon. Sooyoung has eidetic memory and she teams up with Jang Hyuk to pursue a serial murderer who was once thought to be dead. Sooyoung’s poster says: “I remember everything I see like a photograph.” It seems like Jin Seo-yeon also has a connection to the murderer because she squints threateningly as her poster copy says: “I have a debt I need to repay to that bastard.”

Jang Hyun-sung plays the ambitious section chief who keeps making the stakes higher and higher, and his dedication shows in his poster which says: “It’s fine to have personal grudges and suspicious, but the organization must come first.” Ryu Seung-soo plays a veteran police investigator who plays the go-between for Jang Hyun-sung and the investigations team. According to his poster, he may be the old stodge on the team, always wanting to do things the old way by just running the field because he says: “Forensics investigations, cutting edge technology are unnecessary. Investigations are about stamina.”

Saturday-Sunday series Tell Me What You Saw, co-written by Go Young-jae and Han Ki-hyun; directed by Kim Sang-hoon, will begin airing on OCN starting on February 1. 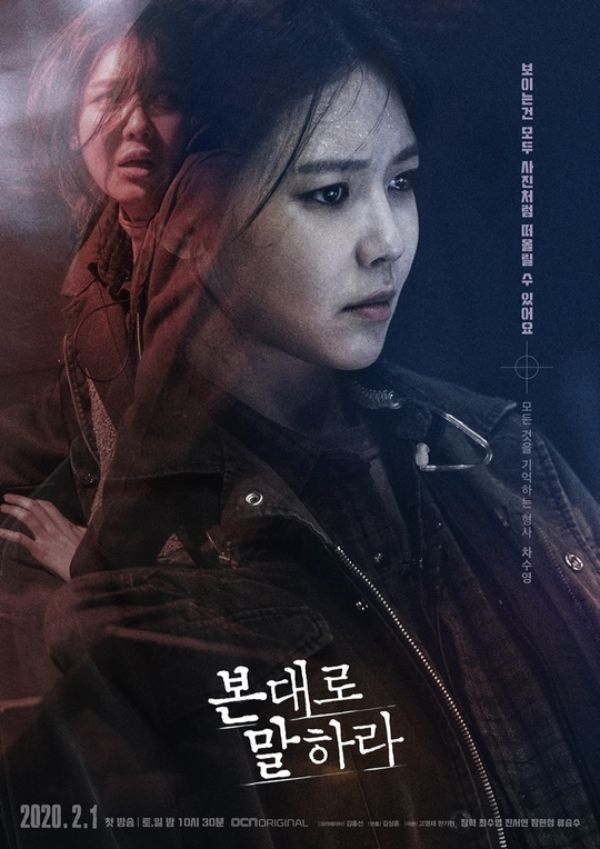 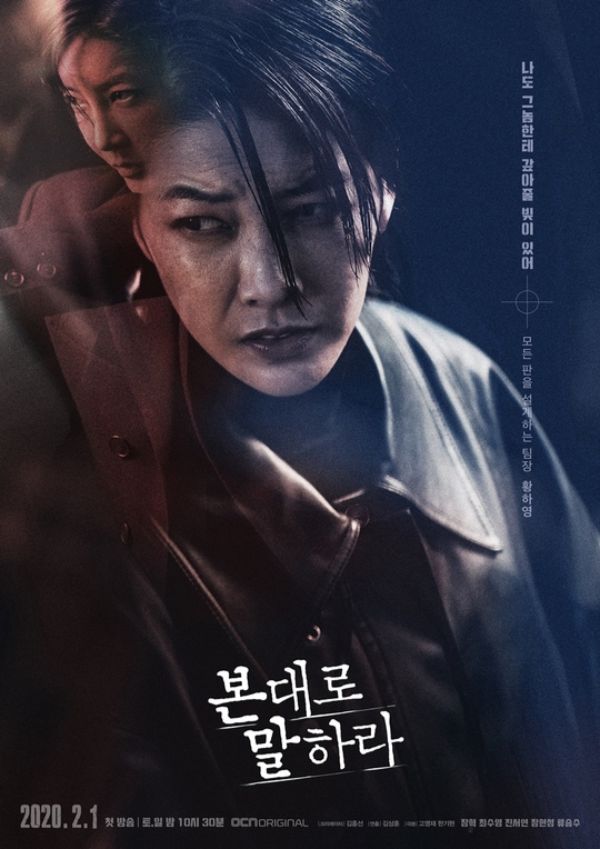 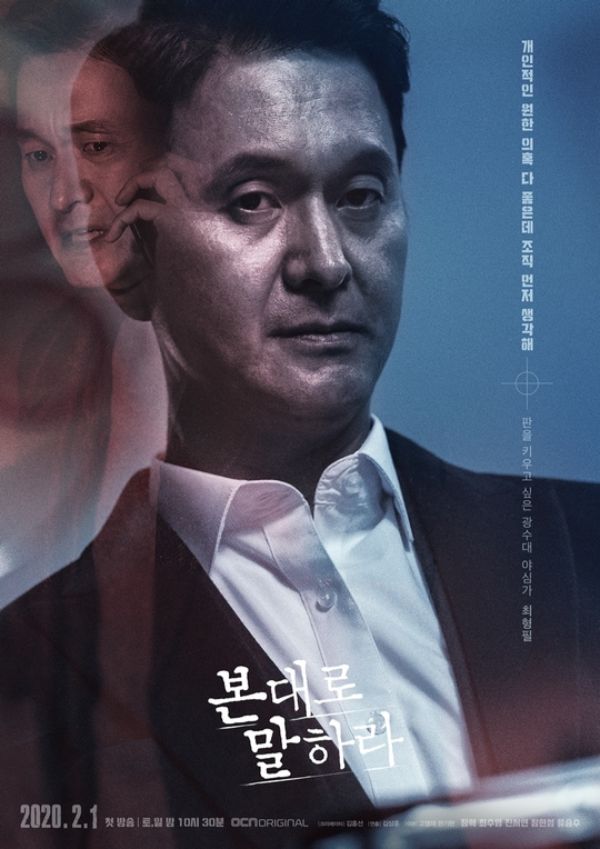 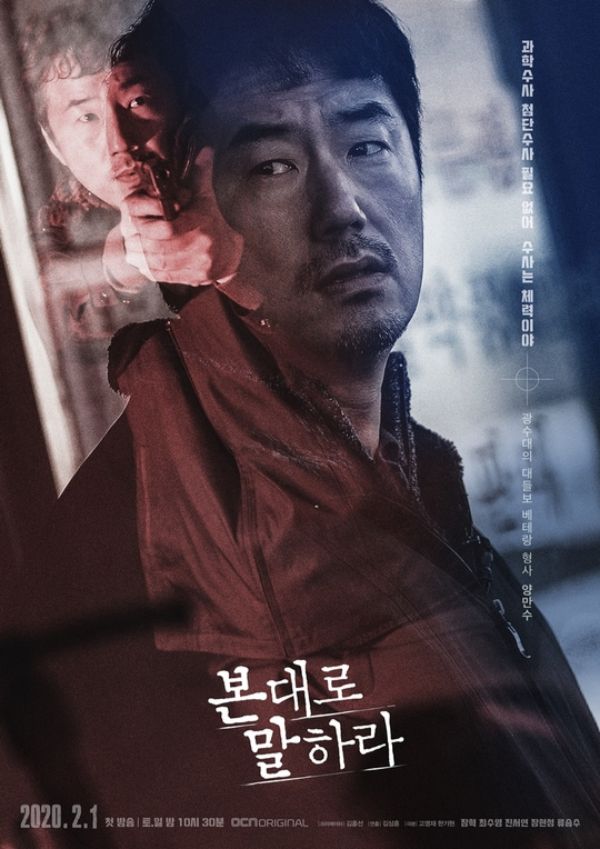 I will watch it for Jang Hyuk.

I swear my heart skipped when I saw Jang Hyuk's poster.❤️

I know exactly what you mean. :)

You have to tune in and see for yourself 😉

We gotta stop her. I just don't know how.

Knock her in the head with a frying pan. She'll turn into a hogu. Or STRANGE WIND can blow her to outerspace where Monkey King and his alien monkeys are living.

Maybe my amnesia would get worse , do you think the same thing that worked for Yoon ShiYoon would work for me ?!

I think we have miscommunication , I'm not getting what you mean .
Outer space ?! Why ?!
P.S the frying pan was used on YSY recently 😂😂😂

@waadmay Haha. That's one of @katakwasabi early spinoff work. Click here if you are interested in further reading.

P.S. I get you reference. I watch that drama. Dong Hsikkie fan here. 😉

@msrabbit Thanks for clarifying and yay for dongshik I'm a fan too .
Nothing more fun than watching a kitten mistaking his identity as a lion only to grow some claws and fangs in the end 😂🤣

I miss the man and his fan. It's good to see him back soon.

He still has the hair, so you never know.

I think he'll have another famous prop in this drama later. lol.

@tineybeanie Thanks for the reminder for this upcoming show!

Jang Hyuk is finally back again! He was roaring levels of great in My Country as Lee Bang Won, this time he’s taking on such a different character. This guy is seriously an actor that never disappoints. He takes his craft so passionately. Melo, action, sageuk, thriller, you name it! Can’t wait to see how he interprets this role.

Both Sooyoung and Jin Seo Yeon look perfect for their roles too. Esp love Sooyoung’s immersion in her character. I love the chemistry of the trio already. There is also an official trailer out already too for those who have not watched it.

The good news is that TMWYS is already on Viki’s “Coming Soon” list so no availability angst.

On the one hand I like the mane of glory. On the other I don't feel like watching something dark. Maybe I'll toss a coin when the time comes.

This character poster is weird compare to main poster. But, I'll take whenever Jang Hyuk is. lol

I saw the pics of Jang Hyuk's hair and he's rocking that long and edgy look. But. I don't like thrillers like this. I expect snappy dialogue and non-romance and @waadmay lurking in the shadows. So, I am torn.

@yyishere I love you , we should interact more .
When are you going to be on discord ?!
Please make the jump 😊

Discord, eh? Heard it's an exclusive secret society. What do you do there? Discuss Oppas and azzo's drama?

@yyishere Yes we do that and other fun things , and it's exclusive with a sign that reads only beanies are allowed 😉 here's a link https://discord.gg/ApcHMR if you want to check it out

Yessss this is a must-watch! Excited to see Jang Hyuk back so soon.

Yes it is Jang Hyuk and OCN!! Both my favourites haha....

A second look at those character posters remind me of U.S. school portraits from the 80's—minus the laser beams.

After watching the trailers, I feel like this is influence by The Bone Collector.

Ok, so, confession time: I love the Lincoln Rhyme series by Jeffery Deaver and religiously followed the novels. I know the Bone Collector recently had a reboot on TV...and this is shaping up to be something very similar, which I will 100% lap up. I love the series so much that something so close to my absolutely favourite novel section is an instant follow on my part.

This sounds promising, I’ll even overlook the photographic memory, at least she wasn’t described as a genius or FBI profiler or possesses superpowers.
Hard edge noir type would be great. They aren’t going to shoot this on a reduced lighting budget are they 🤔

All you had to say was Jang Hyuk and I'm sold.

I'm excited for this one and happy that Viki is picking it up. Hopefully the translation crew is quick and accurate.