Lee Ji-hoon, Seo Ji-hye, Sohn Na-eun join cast of Will You Have Dinner With Me 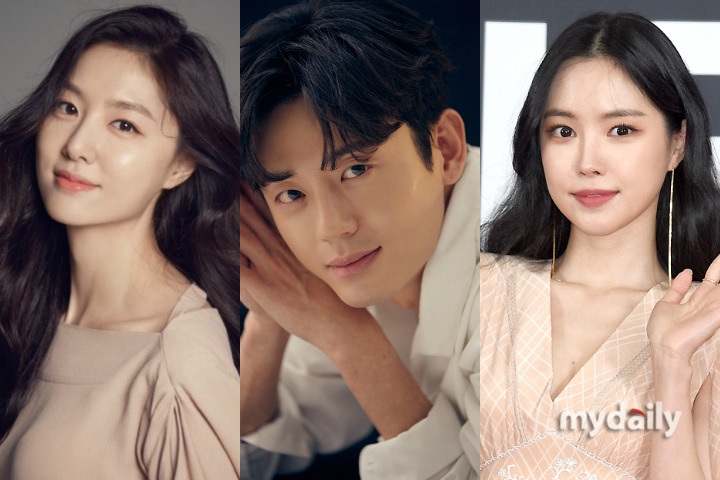 MBC’s newest romance drama Will You Have Dinner With Me has completed the lineup for their main cast. The drama’s plot is about the ways that people cope (or don’t cope) with the pain of breakups and how food can lead to unexpected emotional connections.

Song Seung-heon was confirmed a little while back as the male lead and Seo Ji-hye (Crash Landing on You) will be joining him as his costar. Lee Ji-hoon (9.9 Billion Won Woman) and Apink’s Sohn Na-eun (The Most Beautiful Goodbye in the World) will join them as second leads.

Seo Ji-hye’s character has a personality that’s passionate and a little out there, but after experiencing two severe breakups she’s tried her best to numb her heart. Lee Ji-hoon’s character was the one responsible for one of the heartbreaks in question.

Currently a journalist, formerly Seo Ji-hye’s college sweetheart, Lee Ji-hoon’s the hopeless romantic type. Despite being an utter romantic, he blindsided Seo by dumping her following their graduation and leaving the country. After years abroad, he returns to Korea and reappears in Seo’s life.

Sohn Na-eun will play Song Seung-heon’s ex-girlfriend, a haughty and social media famous fitness trainer. During their relationship, Sohn treated Song Seung-heon poorly, so poorly that he came to the conclusion that she didn’t love him so he left her. After their breakup, Sohn comes to believe there’s no man out there like Song Seung-heon (I can believe it) and decides she must win him back.

PD Ko Jae-Hyun (Player) will direct with Kim Joo penning the script. Will You Have Dinner With Me is set to premiere in May, following 365: A Fate-defying Year.

I really love this pairing. I've actually seen Seo Ji Hye before in some older dramas but never paid much attention. I looked her up during CLOY and was surprised she'd been lead of quite a few dramas.

I don't love the plot, from what I read so far. However, I'd give it a try and watch this as long as it's lighthearted and they don't make it too melodramatic.

Me too, I’ve realized Seo Ji Hye has been in it for so long! So happy that CLOY has the great impact to us viewers thanks to her brilliant and cool portrayal of Seo Dan! She’s gain a fan! Waiting for this ☺️

This one sounds instantly forgettable.

Yes, we already know that the romantic journalist will have a perfectly valid, tragic reason for the bad breakup and so that couple will joyfully get back together but only after several irritating misunderstandings, and that the fitness trainer is doomed to never get her man back because - and someone should really tell her this - she did not get top billing.

If you had clearly read the character summary in the post, you would have realized that the FL, played by Seo Ji-hye, will not eventually get back together with the romantic journalist as he is the second male lead and is doomed to be alone (or in some case get together with second female). The FL will eventually fall in love with ML here

From the picture, I thought the leads were going to be Seo Ji Hye and Lee Ji-hoon.
Nothing against the handsome hand-towel, I just like Ji-hoon more.

Yes to my beautiful Seo Dan!

Some good casting. I will give it a try

I don't really like the plot, but I've been impressed by Seo Ji-hye in CLOY and may give it a try.
But the premise is not attractive at all.
Why do women have to go after men who've dumped them?

The manhwa of this was really good but it is a slow-paced kind of story because the friendship happens first between the lead characters while they got to know each other through various meals together BEFORE they fall for each other. So while it was a good read idk if it would make for a good show.....but it was a very warm comfy read, them getting together in the story also felt very fitting. There's nothing dramatic in the story, no random mother in laws and parachutes to north korea so....I hope they adjust it well

This description actually has me interested in watching it.

I like the pacing and premise of the webtoon but I don't know if the drama's gonna have the same feel. But I'm going to check this out anyway for Seo Ji Hye and Lee Ji Hoon. I hope this turns out to be good.

Thanks, this sounds like exactly what I'm looking for!

I also liked the webtoon which is why I'll try watching, but I really don't see SSH as the ML. I hope I'm wrong.

This is really random but I laughed at the synopsis. "Seo Ji-hye’s character has a personality that’s passionate and a little out there, but after experiencing two severe breakups she’s tried her best to numb her heart." Is this like a continuation from CLOY for Seo Dan hahaha~

A must wait drama for me. Been seo ji hye fans all along and so glad she get her main role again. She deserve it, she always give put her best in any role given.