Jeon Ji Hyun goes to Hollywood and back 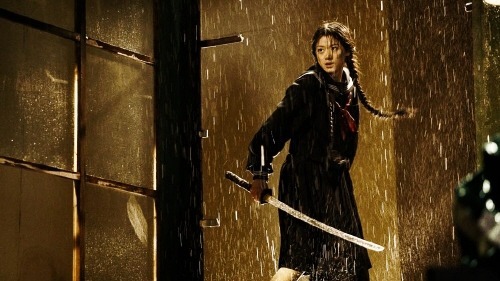 Jeon Ji Hyun‘s big Hollywood debut in Blood: The Last Vampire won’t be out for months yet, but she’s still making the news about it. (By the way, ranty sidebar: The source article stated the title as “Blood Last the Vampire,” which keeeels me. Five times! Come on, fact-checker-deficient Korean press. Get the basics right.) 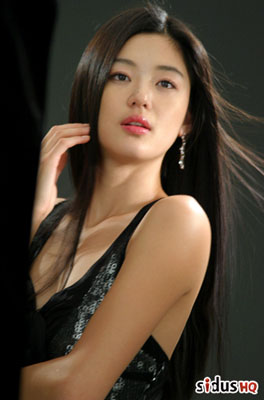 Anyway, she’s currently back in Korea filming what I think sounds like a much more interesting project, The Man Who Was Superman. The “human drama” is about a struggling documentary producer/filmmaker (played by Jeon, makeup-less and dressed down in nonfashionable clothing) who dreams of scoring a big story. In hopes of achieving that success, she films her latest project, which is all about a man who believes himself to be Superman.

After Superman finishes filming, she’ll head back to the States where she’ll do some post-production recording (ADR, I assume) work on the Universal Studios-produced Blood film. I don’t know much about the anime series, but if she’s playing some kind of warrior schoolgirl chick, I’d say the still above DOES make the film kinda interesting. Well, better than I was expecting, anyway.

"played by Jeon, makeup-less and dressed down in nonfashionable clothing"

Now that I find really hopeful, after the way she (and/or her managers) seemed to retreat into safer waters for subsequent movies after the fan-panning that she got for 4 Inyong Shiktak, which I think is a fine movie (and could have been a superb one if the director had just had the nerve to lose about 10 minutes in the cutting room). That really brought out the precariousness of Korean fan culture and the way it's liable to force great performers down particular paths.

Oh the moans and reproaches because her wonderful performance as a suicidally-depressed woman who's lost her child and, as a consequence, her husband's trust, didn't meet the fan's expectations of the roles she "ought" to be playing. And the cowardice of the distributors, who went with a poster and DVD packaging that used a somewhat louche glamor pic of JJH that had nothing whatever to do with her role or appearance in the movie. Especially the one for the Taiwan market, which I happen to have for some reason, which makes visitors who browse our DVD cases suspect I have a secret taste for XXX Asian bondage flicks.

As for that mangling of the title of her forthcoming Hollywood debut, I suggest whoever perpetrated it should be made to read out "Blood Last" fifty times on live TV in front of an audience packed with native English speakers. Though the outcome might just be that they'd be hired as English language coach for the eagerly unawaited "Rubeu Shtolye in Halbaldeu II"

As a person who watched both Blood: The Last Vampire and Blood+, I'm glad to hear it's going Live action. Though the Anime and the movie were slightly different stories.

Anime was supposed to be the time period after the movie but the addition of Haji (as cute as his character concept was) kind of throws off the relation to the movie. Though both stories were well written, just the movie takes a couple watches to pay attention to the actual storyline instead of your mind screaming "Where's the guts and gore!".

Toya, since you've seen the Blood series before, how do you feel about Jeon Ji Hyun being cast? Think she fits the role?

I know this is an old article from a long time ago, but I'm a new fan of Jeon Ji Hyun. My first kdrama ever is the current You Who Came From the Stars show. It's wonderful, absolutely excellent!

I just have a quick question: there are some netizens and kdrama fans in some forums that mention they know some stuff about JJH in real life that maybe made them not like her a lot. Do you know anything about this? Can you tell me a little bit about what you know?

i'm so excited JJH's in a big hollywood movie.. she looks geat in the still..

i saw the anime movie and the tv series. basicly, she is the last pure blood vampire who works undercover for the goverment as a hit woman in search of hybrid vampires. the story tells how the rich discovered her family lineage and tried to isolate her dna by creating hybrid humans, in an attempt to prolong the life of the rich, but somehow it got out of control. there is lots of killing and blood in both anime, but the story line is great. i hope the live action plays well here in the states. as for a korean playing the part, well remember the movie, memoir of a geisha? it was a chinese crew playing japanese. however it may be, we'll see when the movie comes out.

I have only seen her act in the movie Windstruck, so not sure if one movie is good enough to base her acting skills on, but I think she'd do a great job at the role.

The range of emotion in Windstruck shows she's capable of pulling it off, just wondering how she's going to portray Saya's Stoic-yet-not attitude.

I am anticipating the fight scenes. She was pretty good at them.

Emanuel, the synopsis you gave was a little inaccurate. She isn't a hitman for the Government in either Anime production.

In the movie, Saya worked for an organization separate from the government that hunted down vampires. No specific organization was mentioned but seeing as they are not with the US and at the end of the movie, I believe it's the Japanese Government that was asking around and showing her picture.

As for the Anime "Blood ", they elaborated more on the organization saying Saya worked with "Red Shield" which at the point that draws the anime and movie together is the David character seeing as it was I believe his grandfather or his father, still can't remember at the moment, whom she was partnered with and the current David was following in their footsteps. Though for the anime (I may be wrong about this one cus I finished it a while ago) wasn't Red Shield funded by the head of the organization?

she's kind of too tall to be saya. Saya was a small delicate character with a mean streak beyond her physical appearance. Jeon is tall and lanky with a stare that's more about boredom than being calm and cold. I've seen the Blood movie and series and I don't think she'll really add or take away anything important to the show....since both versions aren't that interesting...well, to me at least.

I guess I don't really care for the story...I'm just curious about how she'll do in it.

I watched Blood and the anime was freakin' good. The music (especially sung by Hyde) were awesome, so I'm pretty curious about the film ^^
Didn't know there was one in the making.

Ah Toya Red shield was founded by the great great grandfather of the head of Red Shield...Anyway it was originnally from his family and they created the association to atone for their sin with Diva.

As for emanuel it may be this for the movie I haven't watched it but not the anime.
In the anime Saya and Diva are two sisters that were found in the same "egg" the two girls were woken up by blood. Both are immortal but need blood to survive, but each sister's blood can kill the other and with that blood they can either create some kind of monsters that are called don't rememberwhat but I guess you could say it some kind of vampire, or if they make human drink it when they're on the verge of death, they can create "chevaliers" which are kind of like her and whose role is to protect her.

While Diva was brought up in a cell apart from humans, Saya was on the other side brought up like a real girl. But Saya found Diva and released her not knowing that she would turn out to be...err pretty scary. The Red Shield association was then founded by the family of the scientist that worked on the two sisters, Saya works for them and their ultimate goal is to get rid of Diva who kills and create monsters everywhere.

As for Hagi he's the first chevalier that Saya "created" by mistake in fact, she didn't know he would turn out immortal like this.

Anyway, I'm eager to watch this ^^ Thanks Javabeans for the info ^^

La Plume, sweety, I said funded, not founded. As in the current head of Red Shield was paying for all of it... or at least I think he was.

Jeon Ji Hyun rocks and i really hope the debut in the amerian industry makes her justice, since i truly belive she has lots and lots of potencial

i think JJH fits the role of saya.. she can be cold and calm..I think the success of this film depends on how they market it with the American audience. Also, a big factor is JJh's appeal.. I have been a fan of JJH for a while now, I am just happy that she is given this opportunity to be a lead star in a hollywood film.

I had no idea they were making a Blood movie for the states! Or, is it for the US? I mean, directed at it (i.e.: english speaking)? Anyways, that is major cool! I love Blood+ the series, the anime was awesome, and Blood: The Last Vampire was too (the anime movie, which I believe, came before the anime and what this movie will be based off of).