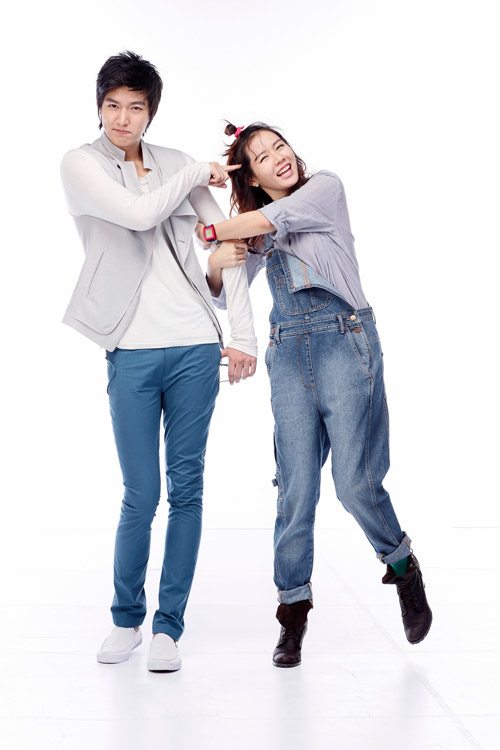 I don’t care what people say, I think Personal Taste is looking adorable.

These newly released stills show the stars looking cute and friendly, and reflects the dynamic between their characters as Sohn Ye-jin‘s Kae-in thrills at the idea of having a gay best friend and latches on to her new roommate Jin-ho (Lee Min-ho) with great enthusiasm, to his dismay and discomfort. Although it’s Jin-ho who first lies that he’s gay, he finds himself increasingly reluctant to perpetuate the pretense but due to certain reasons that keep cropping up, he has to go with it. (And then, to his horror, he finds himself attracted to her against his own wishes. Curses!)

Gotta say I’m not loving the tight pants on Lee Min-ho, even if Jin-ho is supposed to be they type of guy to wear fashionable and tailored clothes. They’ve styled Sohn Ye-jin perfectly, though — she’s not supposed to be unattractive, but merely comes across as that at first glance because she doesn’t take care to present herself well.

I answered the questions in the previous thread but I know they’ll pop up again: Yes, the novel is in Korean. No, it is not in English. You can probably buy it at a Korean bookstore if you’re in a metropolitan area that has Korean bookstores, under the title 개인의 취향 by writer 이새인.

Not gonna lie. Lee Min Ho looks adorable here. Too bad the novel is in korean. Who knows? If the drama does well maybe they'll translate it.=D I'll be following this along with Cinderella's Sister.

i'm with you JB, whatever they say this is on MY TASTE too! ^ ^ as the title say its our own personal taste. ^ ^

Cuties! I cant wait for the drama ;D Looks adorable

But did they HAVE to dress her so hillbilly? Nevertheless she still looks adorable though I think she sortof overdid it?

I love the last pic, really cute.
I'm kind of thinking what this drama would like with someone who can do the whole outrageously campy thing but is still straight, like G-Dragon or Jang Geon-suk, the former is just so awful that he's sexy, the latter, well, we already know he can pull ANYTHING off.

I can see this will be fun and lulzy, but I'm just not feeling the pull (yet).

The last picture is adorable...

it looks like they will have a good chemistry. From the stills, SYJ looks like "too cutesy" (if that is even grammatically correct). I just hope she is a cute cute, not shriekingly painful to watch cute.

I love SYJ from all her previous films (The Classic, A Moment to Remember) but in a drama, let's just say I am not a big fan of the projects she chose. As for LMH, this is his comeback after BOF. I am anticipating to see how he has grown and matured because I sure as hell saw a lot of RAW potential there. I hope this is the drama that hones his acting skills and takes it to new heights.

I will definitely watch this!

at #6 su - pah, i did not understand you post.. you mention something about "outreagously campy but still straight like GD or JGS".. did you mean that LMH is gay in real life?

I can’t wait...the pants does look a bit too tight

Doesn't she give you a Jan Di (BBF) feel? The messy hair & faces.

Paging Makeup Artist of Personal Taste: Please lay off the lipstick for Min-ho. He's pretending to be gay, not a tranny. Thank you. :-)

@8 xiaoSxin
Nooooo! That's totally not what I said, I was just musing over other actors who could have added some zing to this role.
I adore LMH, I really do, I'm just a teenie bit skeptical as to how he'll pull off the whole gayfakery thing and make it work. I could be proven wrong once the drama starts though. :)

Besides, I'm just a *teeny* but bitter that I can never look at LMH like *that* anymore because my two-year old nephew is the exact replica of LMH, even strangers off the street have commented and my friends lovingly snuggle him, referring to him as ''yaah! Gu Jun Pyo!'' and only recently have I began to accept reality. I mean, the face, the eyes, definitely, even the way he stares, grimaces, the hair, the eyebrows... nooo... *sob*

Pardon me !, but look like noona and younger brother.

The last pic is sooo adorable.

@jb, not fan of his tight pants, either. At least tptb didn't dress him like Jang Geun Suk in the CF with Go Ara, the one in which they dance the Tecktonik dance? Oh boy!

Gotta admit they look so darn cute and funny. I found myself laughing at the pictures. Yikes! Sohn Ye-jin’s hair is kind of over the top though.

Love the last picture! As well as her boots. :]

Yeah, I'm pretty excited about this drama. It should be lots of fun to watch.

well I would be as excited and act the same way like SYJ shown on the stills if i have SUPER CUTE gay housemate like LMH.
Even if I can't do anything to him --- still, eye candy won't hurt.. ( well I would be sighing too many times after that, and cry 'WHY HE"S GAY? )

I love it. If this was on in the US, I would be hard pressed which show to give my ratings help to, this or Cinderella Unni. In anycase, that's why God invented DVRs..

Oh, and tight pants is a no-no. Especially in electric blue. Leave that madness to the boybanders - who still can't pull it off!

"I don’t care what people say"

Who is saying whaaat???? I haven't been following conversations or comments here, so fyi, critics, I have several cans of Whoop-Ass and some (small) boxes of Wedgies laying around, so yeah... :-D . I keed, I keed. The cans and boxes have expired.

:-) This IS looking adorable. LMH's entire outfit is sucky and stabby-making, but then anyone who can pull off the BOF wardrobe has my vote of confidence.

overalls are making a comeback? lol.

OMG Lee Min Ho looks so cute...Was eagerly waiting for his next project and there he comes with a bang!

oh man, i will fall for lee minho even more, here, than i did in BBF... SYJ is a really good actress and hopefully she can pull off the role!

I, too, think the last pic is adorable! LMH is so sexy...whew! But I have to say, if she's the kind of girl to wear overalls, she wouldn't be wearing those boots. Just saying.

he seriously has skinny legs. HAHA.

i know i've said this before, but i'll say it again, just cos:

I'M SO EXCITEDDDD FOR THIS!

I feel like LMH looks more unnatural in these photos but SYJ seems to be much more relaxed. I guess that fits their characters well since LMH is in a more uncomfortable position while SYJ's character is loving the situation.

Looking very much forward to this!! Fighting!

he looks so yummy!!!

They are looking really cute together. I also agree with you about the tight pants...mehhh I'm not sure how I feel about them. LMH is kind of a dork so he always gives off that vibe to me (even when he's trying to seem all stylish). I haven't been looking forward to a drama like I am with this one for such a long time!

dang~ im so jealous. i wish i was her. boohoo. who wouldnt want to hug lee min ho from behind???? and of course there will be at least a few KISS scenes for the drama. huhuhuhu. i wish..

i love the chemistry...can't wait for it to be shown

Maybe it's just me, but Lee Min Ho does look a bit awkward here...
His Junbo gives me a hard time to accept this smile...

Lee Min ho is sooooo handsome here.... Can't wait to read the recap... I hope Javabeans writer will write the recap of this drama very soon because I only observe korean drama from your recap and I dont know how to speak korean because Im not korean, but I like Korean drama and kpop....

Please Javabean write recaps for this drama.... PEACE OUT ^__^

Honestly, this is the only drama that I'm anticipating in 2010. I love Sohn Ye-Jin whatever character she takes on. Love LMH too. So can't wait.

I got to say.. LMH looks so gay in the first picture... i mean not negatively.. but he really looks like a gay... i can't wait for this drama to come out... got to be a good one... LMH from the butt-head mean rich guy image to gay lookalike ...

I am getting the feeling that we are NOT going to be disappointed in Lee Min Ho in this one! This is going to be a fun drama!

omg i cant wait for this drama...LMH is look so freaking hot....can this guy get any hotter... and yes gotta agree with u...the pants are so .... ya....i guess thats the whole point...lol....but really hope doesnt dress like that in the drama...

the pants are disturbing...
...but overall, the stills are so cute and fun!

so many guys must hate Lee MinHo now. First all the girls were drooling over his Gu JunPyo character in 2009 and now in 2010, he gets to costar with Son Yehjin.

What would anyone in their right mind want to sport that do? I think anyone over eight years old should be banned from having that tiny bun on top of their head. Other than that, this one looks very promising, I'll be tuning in for sure :)

omg! cant waiit for this new drama!
been trying hard to find a good one after you're beautiful

I hate skinny pants on men but *oh my goodness I am so excited for this show*!!!

LOL loving these pics already. So cute!!!! I was awed with Minho's pants too, but then I remembered that he's supposed to act gayish. So I guess I'll pass that up. Never seen Son Ye Jin play a cute tomboyish character. Can March come any sooner?

Son Ye Jin looks adorable and I am at awe at her fun versatility expressions in these photos. Lee Min Ho still seems transparent, but he's young and I saw how a bit awkward and shy he was in front of the camera with Son Ye Jin. I hope he gets over it by the time they start shooting the Kdrama though.