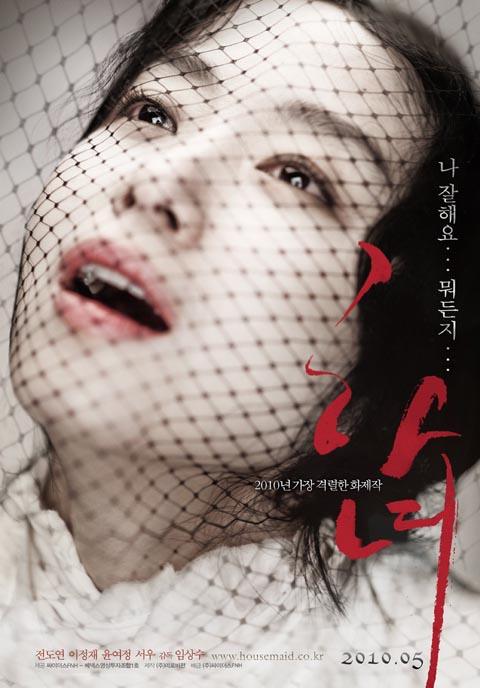 Jeon Do-yeon’s poster shows her housemaid character in the middle of cleaning, and its tagline reads: “The woman who can give you everything — Eun-yi”

Lee Jung-jae plays the adulterous husband, whose poster reads: “The man who can have everything — Hoon”

Seo Woo takes the role of the wife, posed as though a queen on a throne who is loath to give up her position. Her tagline is: “The woman who wants to have everything — Hae-ra”

And lastly, Yoon Yeo-jung plays the silent, watchful housekeeper (rather Mrs. Danvers-like, isn’t she?) who is the first to catch on to the developing relationship between the maid and the man of the house. Her line reads: “The woman who watches over everything — Byung-shik”

Seo Woo intrigues me...She presents such a different air in the poster. I'm watching cinderella's sister at the moment and i find it interesting this movie will be released while the drama is still airing.

seowoo looks so different. no doubt she"s a great actress ^^

Seo Woo's poster makes me think of Leighton Meester. The angry eyes and the vulnerable undertone reminds me of Blair Waldorf on Gossip Girl.
And the last poster for some reason reminds me of Mrs. White from the game "Clue."

The top poster looks just like Lee Min-jung to me!

Agree with @ 2 - Seo Woo is such an interesting actress; one minute a child, one minute a woman, and quite convincing as either.

But let's face it, the real draw here is nekkid LJJ. I'll say it first. :-D

Well, it had to be said.

And wow, Sae Woo looks different there, doesn't she!

wow, these posters are real interesting!! will definitely watch this!! all the character posters give this nice, eerie feel to it!

i really like the copy on each poster..well done..:)

I'll second that:) But seriously, the four main characters all look intriguing.

That first photo of the antagonist looks like a woman caught in a net of a world of her own making....she looks insane and beautifully alluring at the same time. I feel sorry for this family 'cos along came a spider.

the first poster is creepy and beautiful at the same time. well done, i must say. very haunting.

I've been away from Korea too long. Especially since I'm now watching Cinderella's Unni and since Seo Woo looks at least ten years younger than she actually is, the idea of Seo Woo being wife to Lee Jung-Ae who's 12 years her senior is giving me the heebee jeebies.

Perhaps it's perfect casting - a foil to make even more obvious how the more child-like wife gets left out when the more adult maid and husband play house.

these posters make me very very excited for this movie!

on another note does anyone know whatever happened to the movie 'actresses'? did it come out yet?

"Mrs. Danvers" -- wow, Hitchcock's "Rebecca" reference (or the novel)!
Somehow now I can see where this film originated from.

if we ignored SW face in CS am so disappointed with her acting.. she appears like a 7 years old child instead of 14 and seriously i thought she had mental disorder.
i know people say that how her character..but i believe her character should be cute, adorable and innocent.. but instead am feeling soooo annoyed.

anyhow in this poster she looks AMAZING, but i doubt i'll watch it bcz of the content.

The first poster has a sense of sexuality to it. Impressive casting

WOW - i'm impressed with seo woo's transformation here - she doesn't look like Hyo sun to me!! (even though this was filmed earlier... still - it comes out after everyone sees her play a little-ish girl)

Interesting how Seo Woo's character is really set apart from the other three in these posters -- she's the only one we see reflected, not photographed directly. Since everything we've seen of this film seems very deliberate, I wonder what they're hoping to convey with that choice.

And I have to say I love the design of these posters -- it's nice to see the copy enhance the pictures and not ruin them, as so often happens.

Wow, Seo Woo's face looks exactly like my internship mentor in the poster above (@[email protected]) They're both beautiful and attractive, and... short, ha! :D

I find Seo Woo a bit annoying in CS's but we'll see what happens...

I'm looking forward this movie, I love all the three leads, and Seo Woo is actually good, but I think she's a little bit overboard with her cutesy in Cinderella Sister. But in more serious roles, she's better.

Just realized Yoon Yeo-jung is in this. She's one of my absolute favorite character actresses. She'll be great in this. Honestly, I think she can play any kind of role. ;)

I thought the mirror was odd too and reminiscent of "...who's the fairest....?"

OT: aren't we supposed to be annoyed with Seo Woo's character in CS so we can symphatized with MGY's character?

I like SW, that's why I'm annoyed that CS want us to be annoyed (and hate) with her Hyo Sun. :)

Didn't know Yoon Yeo Jung was in this - another reason to watch. Definitely get the Mrs. Danvers vibe. :D

And, of course, I agree with langdon813 - nekkid LJJ is a plus...
but I'm looking forward to all four actors in this one. ;)

The maid looks really old. She is an okay actress but to see her playing a seductress is beyond comprehension.

aah Nadia...men like women of all types...
and Jeon Do-yeon is beautiful in this movie.

for the 1st promo pic...the perfect song for that image is Garbage "I Would Die For You." It sets the eerie vibe and obsession weaved in the black Russian netting.

@28 Nadia
lol !! Well, i guess this what make a different between a great actress and the so so one...But the first picture, she looks stunning, but not so much in the second one...Seo Woo!! She looks so different, i almost couldn`t recognize her...

i'm very intrigued by seo woo too! there's a very muscular quality to the streams of emotions and movements she improves or lets flowing forth, sometimes more than she initially seems to have planned. it's mesmerizing to watch. how she's used in this film appears to be inspired of director im, and hopefully more industry folks continue to draw on her gifts in surprising ways.

i was actually waiting out jeon do yeon's roles between her two pillars "happy end" and "milyang (secret sunshine)", since the industry only threw melodramas or sexy dramas at her that required either a whore or virgin - typically in her own coquettish way.

this new, mature maid (who's outfitted like those sexy upscale maids susan george and sarah miles used to play - also in varying degrees of "offending" the happy sanctuary of elite middle class), at least is a more mature persona that doesn't always begin as an aging tease ;P

and yes, Yoon Yeo-jung is the one who needs to be crowned National Treasure before all other pretenders, ha!

the 1st poster pix reminds me of dracula.

I would watch this movie for Seo Woo I am pleased with her acting in CS. She portrays a character completly different from MGY's character to the T and she convincely shows the various sides of her character.

"Housemaid" will be presented in competition at Cannes Festival !