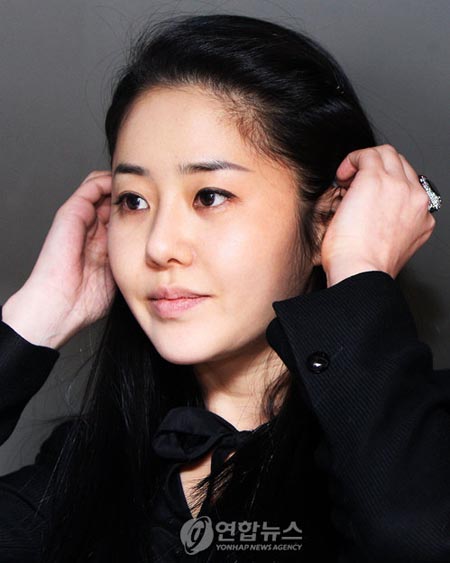 It looks like Daemul is close to getting an airdate on SBS; producers have been meeting with the broadcasters to set a date in stone, and while it’s not fixed yet, it’s likely to take the Wednesday-Thursday timeslot after the Hong sisters fantasy-trendy drama My Girlfriend Is a Gumiho. That drama will premiere in August, meaning Daemul will probably hit the air in October.

This comes after a rocky pre-production period two years ago that included PD switches, which was followed by a cancellation and even a lawsuit against one of its stars. (The production’s two leads, Go Hyun-jung and Kwon Sang-woo, went on to other projects after waiting for Daemul, but a dispute arose regarding whether they were free of their obligations. Eventually they worked it out and both stars are back onboard.) The project had been dropped by SBS, was rumored to be picked up by MBC, and is now back at SBS.

Daemul has attracted a lot of attention from the get-go; based on a manhwa, it features a relationship between the first female president and the gigolo who seduces her.

Never thought I saw this coming back again after all those difficulties. But I'm glad to welcome it back, though whether or not it's any good, we'll have to wait and see.

is uber EXCITED!!! its a good pairing!! love KSW and doubly loooove Go hyun jung!! she was sooo adorable in whats up fox!! looking forward to this serial... interesting premise....kinda getting bored with the noona love/ oh crap you are a GIRL stories :(

very excited about this drama. sounds great and the plot has potential to go into any genre direction...serious melodrama, comedy, thriller, etc. plus, i absolutely adore Go Hyun jung and i don't mind KSW cause i think for once, he fits the role. i think this is his first real mature role in a long time, and i think he and GHJ will make a great pair. here's hope all the plans follow through this time around!

Go hyun jun is a good actor. but having KSW as the male lead makes me worried. He last drama, Cinderella Man, was quite bad.

@coollady, totally agree, thankfully KSW has finally decided to graduate from high school and play a role that suits an actor of his stature and age.

Plus I love GHJ, and anytime a drama lead female isn't a spunky, cheerful, poor girl with little ambition who cures the icy man's heart, :) <3

i really want to watch it

It looks fall will be good after all - there's Daemul, Athena and that Rain/Jung Ji-jyun production

yeah like fraulein said fall's gonna be busy for me...though im not watching athena..the others are on my list...plus my girlfriend is a gumiho..im just worried i wont be able to handle all of it

president and a gigolo.. those two words are scandalous... i like it!

the story of this drama looks very interesting.

i wonder why ppl are posting nega comments about ksw. is he really a bad actor? have not seen any of his dramas....

wow ^_^. i'm too excited with this drama..... GHJ so adorable and versatile actress... KSW also good ... not to mentioned to his drama bad love and cinderella man it's quite bored... maybe because of the leading actress...

Hmmm... this could turn out good. Go Hyun-jung is awesome. The story sounds interesting and I'm even hopeful for Kwon Sang-woo. He does evil characters well. At least they are better than his "nicer" roles.

so excited to this one! hope i could watch it on Philippine TV too!

Kwon Sang-woo, I liked him when i was a new bie . I am so over him. Oh yes ! I am one of the few people who watched Cinderella Man. The worst drama i have completed in my K drama history.

kwon sang woo is not my favorite but i think it could work out cuz go hyun jung is fantastic!
i would've preferred jang hyuk though!

i'm willing to wait no matter how long would it take to air Daemul..I'm an avid fan of Ms. Ko Hyun Jung..and these drama is worth waiting..there roles are exciting and so many fans are expecting a good comeback of this drama.. love KHJ forever

"i wonder why ppl are posting nega comments about ksw. is he really a bad actor? have not seen any of his dramas…."

Kwon Sang Woo is talented (feral intensity in serious roles, big-time ham in comedic ones), but his choices haven't been great. (Though Cinderella Man was pretty good -- his chemistry with non-lead Han Eun Jung was sexy and funny.)

This, though, is perfect casting. He was born to play a gigolo seducing an older, more conservative woman. In fact, when you think of a gigolo (i.e. Hallyu Star) seducing older women (i.e. housewives of Japan!), well you think of Kwon Sang Woo. With a smirk. ;)

I'm so waiting for this new drama and I agree with Belleza, Kwon Sang Woo would play a sexy gigolo OMG! I can already image him. *dies* And even more 'cause sometime ago I created a character for a roleplay forum, where KSW is the avatar and I gave him a seductive, smirky kind of guy.

I saw Bad Love and think the boring part of it is the leading actress or maybe the way her character was driven. Sometimes I ranted because it seemed so stupid her behavior, but hey that's screenplay writer's fault. I think this new drama will be great.