Kim Ji-hoon on his theater debut 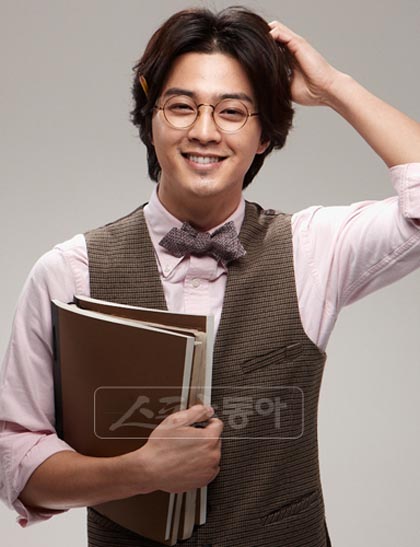 Aw, I love how dorky Kim Ji-hoon looks here in a promo for his theater debut role, which is such a contrast to his usual image (which is closer to the cool and professional Won Kang-ha he played in Wish Upon a Star).

Kim just made his theater debut in University of Laughs, and gave a recent interview with a reporter of DongA news. The play is based on the original by Koki Mitani and deals with issues of censorship and artistic expression; Kim plays a writer, following in the footsteps of comedic actor Bong Tae-kyu, who was in the role before him. His character cowers, acts servile, and endures insults at the hands of the censor from whom he is trying to pass inspection of his script.

In the interview, Kim laughs and says that one upside of theater versus television is that while his face comes out in extreme close-up shots in the latter, acting on the stage is like a “full shot” and therefore there are fewer things to worry about. What he’s more concerned about are his shoulders, not his face — he’s playing a character who is always cringing, which means his shoulders are always hunched. He’d gotten comments from the director that the writer was looking too confident.

Also, in contrast to drama acting, here the biggest challenge is the script. In a drama operating in the live-shoot system, there’s no such thing as a polished, completed script — as the drama progresses, they come out page by page as they are written, and the actors are only able to memorize five or six pages at a time. However, the play’s script is complete from the start, and requires him to know it well enough to be able to recite upon command. With a laugh, Kim says, “I was good at cramming in my school days.”

Asked what the one thing he’d like to tell audiences who came to see “actor Kim Ji-hoon,” he says, “It’s an extremely fun and well-woven play. To be honest, I’m not an actor who looks like the typical writer, but even so, you’ll be able to see me making the role mine. Even audiences who have seen it before will be able to sense a different flavor if they come to see it again. That’s my promise. If you come, I promise that you won’t remember that you’ve seen it before!”

The play just kicked off on the 24th and is currently running.

Adorkable! And the hair is greatly improved (it looks real now)! :-D

he looks different! :O but in a completely ado(rk)able way :D

he looks a bit like jang geun suk in the last picture hahaha..
nice change...

aww, kim ji hoon is so dorky and cute! i wish the play every success!

Aww! He still looks so hot, even as a geek, uri byeonas ahjusshi!

Thnx JB ---- i love Kim Ji since Stars Falling & I just wished i could see this play if i happen to be in Korea. I just missed it a few weeks then coz we were there on vacation! Arghhhhh! Oh i agree he's no doubt ADORKABLE :) Such a handsome face....drooooool ^^. Yeah he's looking hot no matter what!

Good Luck Kim Ji Hoon & hope you won't forget to do another drama too! Maybe a sequel to Stars!!!

@b3z - i agree he did look like Jang geum suk in that smiling face last photo. I'll never get tired looking at him! Awesome face!

oh how cute! i'd love to see this one. or, yno, any one. i wish i'd been reared as one of those musical starlets, of the rachel berry variety.

lol omg that awkward side part.

he seems pretty confident about his performance! sounds good

awww - so cute - love the first pic. it's nice to see he's so dedicated that he's confident enough to give audiences a different performance each time they come. it's also a sly way to get fans to watch his play more than once... =P hehe

Hope his stage play extends till July, when me & my GYL(Gong Yoo lover) friends go to Seoul...so I can watch him perform LIVE!!!

JB, how long will "University of Laughs" be playing?

Oh my gosh! I didn't recognize him at first! (He looks more like himself in the other pictures.)

I wish these were still for a new drama character he was playing. I have a thing for geeks and, when they are as hot as Kim Ji-hoon to begin with, I have absolutely no defenses!

thnx for this JB...you're awesome! my first time to comment coz of my sister who asked me to check this out.

I'm so in love with Kim Ji hoon, please help....stop me! :) He's my no. 1 Korean actor ultimate...that's it...i used to like a lot of them but when i saw him in Stars...and Why did you come...i can't explain his magnetism...he mesmerized me period!

I'm so very happy for him but i hope he does accept another drama project after this theatrical play!!!

thnx dramabeans...i hvnt visited here lately coz i got so busy searching & searching for anything about Kim Ji hoon!!!! All the best to you Kim ji ssi! Sarang hae yo!

He`s so cute in a dorky way..Too bad they didn`t record theater play...i really wanna see him play. I hope the reviews are good, and the play is a success. Good luck,fighting!!

I wish i could go to Korea to watch his play!!! I love his voice!

kim ji hoon so talented in portrayal as a lawyer on wish upon a star love him so he give justice to his role.So adorable hope we can see more of him.Mabuhay

I hope he makes more projects before heading to the military! Another drama or sequel to Stars Falling with Choi pls!
He's truly a good, charismatic K actor, i luv him!

Awww. He is so cute! I love him! Also, I opened a fan group for him in facebook so anyone interested to join should!