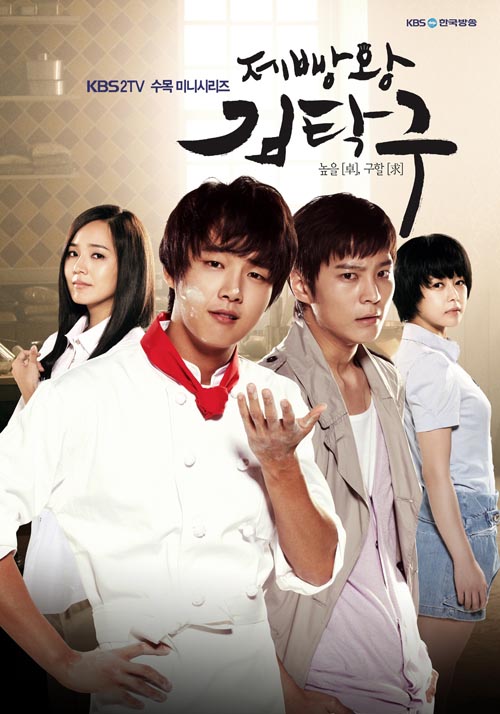 Posters are out for Baker King Kim Tak-gu, the drama replacing Cinderella’s Sister this week. The one above features the four main leads: (from left to right) Eugene, Yoon Shi-yoon, Joo-won, and Lee Young-ah.

Press releases have tossed around comparisons to My Name Is Kim Sam-soon, but I wouldn’t expect much similarity, as those remarks are primarily due to both featuring patissiers as lead characters. I’m not quite sure what to make of the preview; it’s difficult to get a grasp of the tone from it. It has an offbeat retro vibe, which could be fresh and interesting or just plain awkward. But the drama seems to have an interesting stylistic flair, and is more visually appealing than its previous posters and stills portrayed.

I feel like KBS has been pretty lax about promoting this drama; there has been a bit of news here and there, but not much to drum up much hype in the weeks leading up to the show. (Compared to, for instance, the mountains of press and promotional information that announced Cinderella’s Sister. Granted, Baker King has a much less famous cast, but the leads are hardly nonentities.)

Baker King pits two young men in a familiar rivalry: humble hero Tak-gu (Yoon) displays a natural talent for pastry-making, while his rich rival (Joo-won) has no such interest but pursues this path because he longs for his father’s approval. Eugene plays a university student, while Lee Young-ah has taken on a drastic transformation by cutting off her long hair to play Tak-gu’s pastry-making buddy.

Baker King Kim Tak-gu will air Episodes 1 and 2 this Wednesday and Thursday. i gotta admit but the preview looks kinda of boring but i'll still watch because of eugene.

Well I'm interested enough to watch the first couple episodes. Hopefully it's not too awkward. While I like awkward variety shows I don't like awkward dramas.

Whether it is awkward or not, I still will support this drama as I am the fan of LYA.
I have been looking for news of this drama esp from the chinese websites and there are quite alot of news from there. Although the lead actors are young and are newcomers but the supporting actors are not bad at all. Many of them are experienced actors.

EUGENE is the BEST :D
& it doesnt hurt that YSY is a total cutie x)

that drama is not a boring!

I'll check it out for YSY and Eugene but not too excited from watching the preview.

so i saw the comment that the preview was boring but i gave it a shot...NO KIDDING, i don't even know what it was about (and it's not just because of the language barrier)

But i'm a eugene fan so I will watch it

Eugene looks gorgeous like always but I don't know if she's enough reason for me to watch this as I already got a lot on my drama plate...we shall see. Also, that short haircut that Lee Young ah has is ahhhhhhh! Doesn't matter which actress it is but if they have that haircut I get really annoyed by them for some reason. I just don't like it. :-/ Done blabbing.

It's kind of weird seeing Lee Young Ah with such short hair. I almost thought she was Heo Yi Jae at first glance. The two sort of look alike in the first photo.

I'll probably check the drama out for Eugene.

Yup, not overly advertised but still in my must-watch list because two of my favorite actresses are in it. I'll watch this if only for Eugene and Young-ah.

Well, I heard the first six episodes will be about their childhood and then from 7 onwards will be them from adulthood.

Either way, I'm gonna stick with drama till the end even if it ain't popular cause I;m loving the cast.

Yoon Si Yoon looks pretty hot in there.. but other than that, it's MEH to me. But it's a good thing at least, I won't have that much expectations. hehehe..

The most important thing is the younger actors/actresses could act.
Eugene is pretty but her recent acting in dramas and movie are not having higher ratings.........

Actually I wish LYA is the female lead and I really like her in short hair.
@15: ^^

The two female characters in back of the poster - are they suppose to be the baker's girlfriends or older sisters?

Please someone else say they think those shorts look like "mom shorts" on Lee Young-ah. Soon as I noticed I got soooo distracted from everything else in the poster.

looks meh, sounds meh. even with the presence of eugene, can't find the enthusiasm to watch.

Eugene looks way too old for the 2 lead guys IMHO. Unless they are doing the whole "The Woman Who Still Wants To Marry" theme again..... with the older woman / younger guy thingy. But looks ho hum so far. May still check out the first couple of eps though. :)

oOOOoooo....eugene!!!! i will watch it i think...i dont really mind the over used cooking theme, its how they tell the story tht counts.

Hope that she have a important part in the drama...
love her....

I love Eugene; she can do comedy and drama at excellent levels.

And I won't pass up any show with cooking as theme. I even watched Pasta till the end, even with the constant shouting by 'Chep'.

Hmm it doesn't look as boring as some people say o-o Also can't wait for this to be aired.. and subbed xD yay ~

At first I watched this drama bec. of Eugene. After a couple of episode I got hooked and fell inlove with the cast. There is something in this drama that makes you wants more episodes until you found out that you almost going to finished all remaining episodes. The acting is really fresh & the cast is amazing.... No wonder this drama still getting freakin high ratings. : -) GOOD JOB TO ALL THE CAST! Kudos!!!

I agree with Jackiet. This drama gets one hooked right from the very start. Excellent casting from the young stars playing young Tak gu, MaJun, Yu Kyung all the way to the adult and elders. Everyone brought in their A game in acting. I only started watching this drama a week ago, the high ratings got me curious and now I see why.

Eugene was the only reason i watched this Drama. It turned out to be the Best drama ever.

this is the best ever drama!Yoon Shi-yoon is superb -He will be one of the best actor I have ever seen so far. Looks and good acting! watch for him!!!!

no kidding ...this drama is one of the bestssssssss..i reallt love it..

A total package drama. Heartwarming and funny, especially scenes of Tak Goo and Mi Sun. A very positive drama. Congratulations to all the casts and productions.

well..
i've finished watching it..
and it is not actually boring either it is awkward..
thus,it is not judged whether the preview is boring and neither awkward..
if you totally be focused on understanding the story for sure you will absolutely love it!!!!

i love baker king! everytie i have internet i spend my time to watch cous i really really love it! i want to have a part 2 of a baker king hehehehe.. saranghae kim tak gu!