Meet the con man trifecta of Legend of the Blue Sea 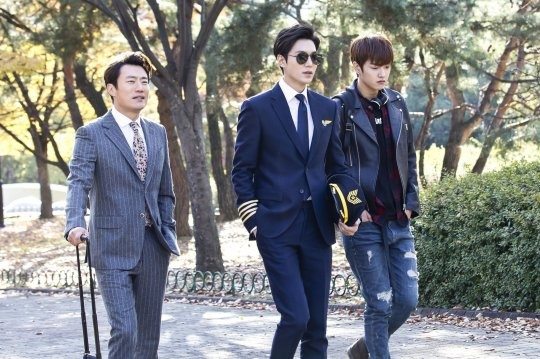 Lest we’ve forgotten that the gift that keeps on giving, aka Legend of the Blue Sea, doesn’t just star Jeon Ji-hyun (You From Another Star) and Lee Min-ho (Heirs), stills of Lee Min-ho and his fellow con men have been released. Actors Lee Hee-joon (Yoo-na’s Street) and Shin (Big) complete the swindling trio led by brilliant con man Lee Min-ho.

SBS’s hotly anticipated Legend of the Blue Sea is a fantasy romance drama written by You From Another Star scribe Park Ji-eun and directed by Jin Hyuk of City Hunter fame. Based on an old folktale about a mermaid caught by a fisherman, Legend centers around the last mermaid on earth, played by Jeon Ji-hyun, and the con man who’s stuck with easing her transition from an underwater existence to a life on land, played by Lee Min-ho. It’s a story that spans centuries, and we’ll be shown how our characters evolved from past to present.

Lee Hee-joon plays Jo Nam-doo, the sly and quick-witted decoy who can convincingly put on any act and lure people in with his inviting demeanor. While Lee Min-ho’s character Heo Joon-jae is the mastermind who conceives the schemes, Nam-doo is the one who lays down the tracks so the con can commence. Shin plays Tae-oh, the technician with flower boy looks who can unlock any door in two seconds, clearing whatever obstacles may obstruct them.

If you love a man in uniform, then you’ll love Lee Min-ho disguised as a pilot with aviators on. Sadly they’re not all in uniform, but Lee Hee-joon in a pinstripe suit gives off a dandy feel, and Shin looks effortlessly cool and casual in a leather jacket. I’d clamor to join this squad. Believe it or not, the show finally premieres next week. The biggest question will be whether it will meet the hype or fizzle despite the A-list wattage. We shall see!

Legend of the Blue Sea premieres on SBS on November 16. 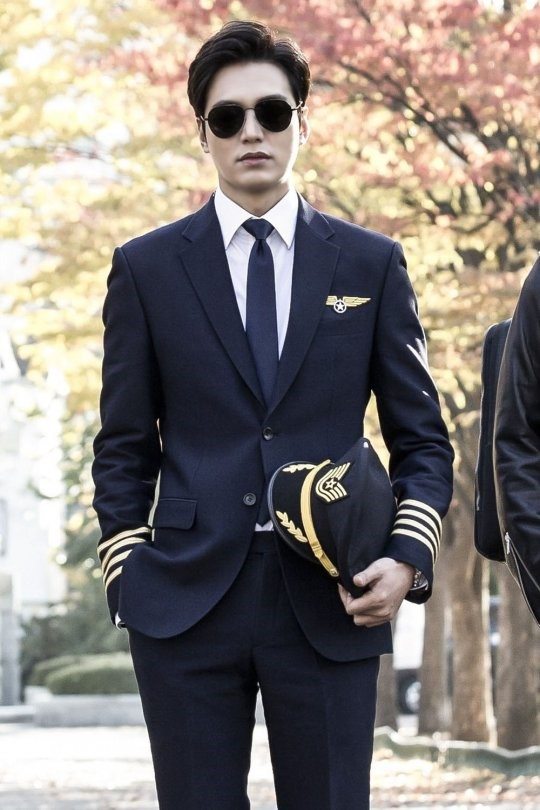 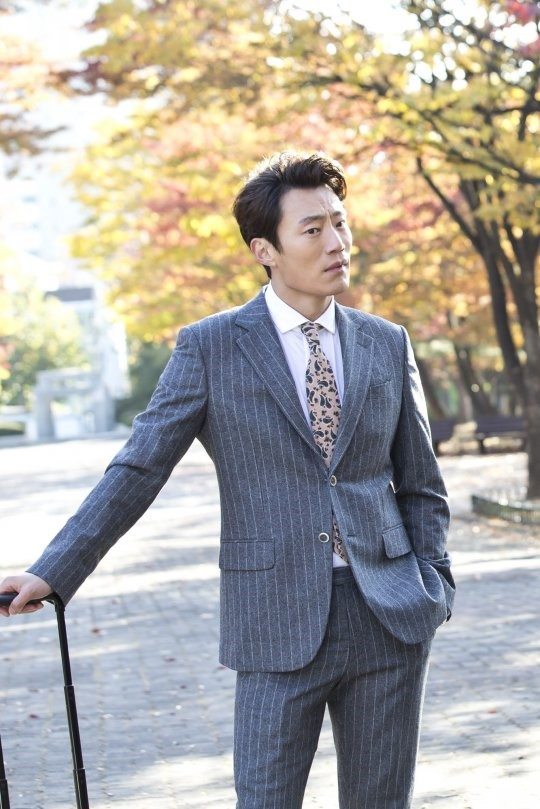 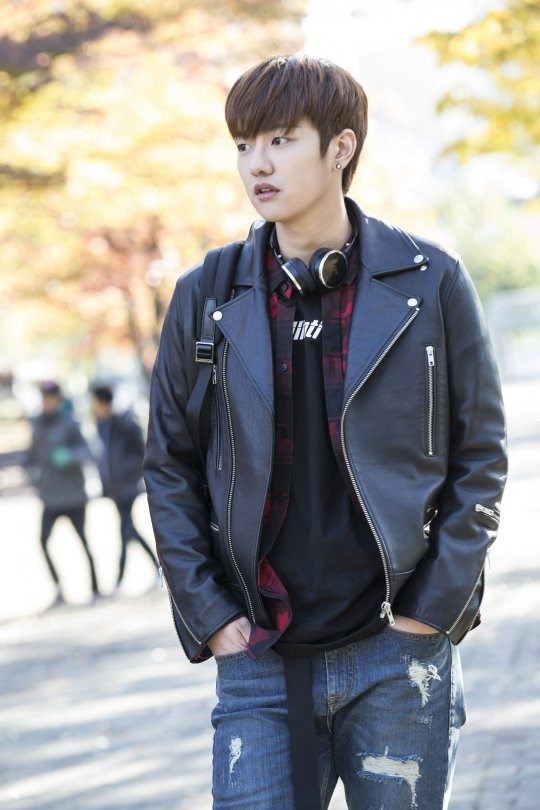 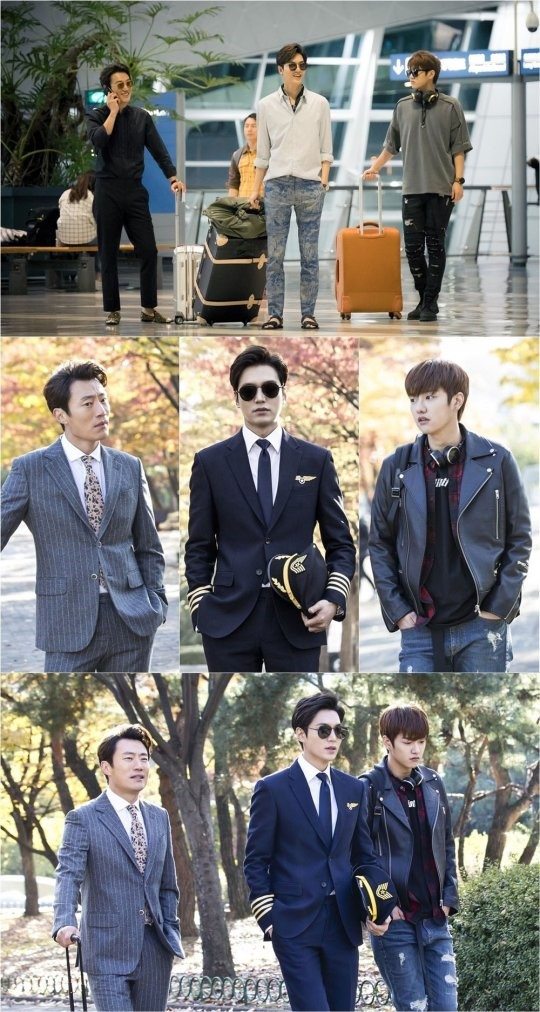 ASDFJKLKKJHGDFSFGHGHKJKJHFHD I'm so glad to see Shin standing on his feet and not lying on a hospital bed! \O/

I just realized that Heejoon starred in Writer Park's Unexpected You. Nice to see him too.

And well, Minho, gorgeous as always. I'm so excited! I won't have internet when this airs since I'm moving. Maybe I'll download the episode at the library or at Timmys. lol

Heyyyy I don't see a lot of Canadian here. Hello!

Hello!!! I'm from Toronto and I am so glad to see other Canadians watching k-dramas too!!?

Yass Canadians unite (for some timbits and bad coffee)! Also from Toronto here!

Aye! Was gonna say the same thing! So glad he's back in dramaland! Been in a coma for too many years hahaha

soo, was he waiting for Gong Yoo to return?

LEE MIN HOT is back, he looks so gorgeous, and the other guys look good too, the visuals of this drama are insane, I just hope they give us a good story

I don't think I'd mind if Lee Min Ho wears a different outfit every episode. Pilot really suits him.

Now, let's just make sure the fluffy sweaters from Heirs have been burnt and their ashes dispersed at sea.

Can I just say that as a Flight Attendant this is my Ultimate Fantasy and I'm very grateful for the early Christmas Gift!!! ??

Where can we watch this with English subs in the US?

How I wish Jun Ji Hyun joined this squad in scamming, that would be hilarious. Well, I can't wait to see minho next week because I miss him so much. Fighting Legend of the Blue Sea!!!!

I'm sure she will. A mermaid turns into a con artist.

????????HOOOOOTTTTTT PILOT!! I am already explOooding due to great excitement! ????LOL
Lee Min Ho looks so different in these stills. He really have gone through hot-charismatic-blatant- conman transformation.
I keep watching the teasers!!! I want the drama please! ???
Im gonna watch each episode at least 3 time. 1st live without sub in SBS site . The second time with sub. The third time I will watch for analysis ???

Lee Hee Joon spent so much time trying to stop his lover from committing crimes in Yoona's Street. I see he got bored and decided to try it himself.

Finally, 4 days to go... I'm giving this my all, no matter what others may said. Waited for so long.. I'm gonna enjoy the ride throughout...???

I love this trifecta already......

Yeah, I never understood the whole pilot thing. Until now. I'll be in my bunk..

Its rare to have all 3 networks starting a drama on the same time. So this will be a competition worth taking note of.

I am personally anticipating LoTBS, and WF

This does not bode well.