There’s been so little advertising for Choi Jin-hyuk’s (Pride and Prejudice) comeback drama Tunnel that I almost forgot it would be airing this spring. But OCN has been steadily chugging away at this fantasy crime-thriller, and a new teaser for it has been released. It’s barely a crumb’s worth of info about the upcoming drama, but I’m just thankful to see Choi Jin-hyuk back on my screen looking hale and hearty after his unfortunate injury.

Tunnel is about a detective from the past, played by Choi Jin-hyuk, who travels to the future (our present) to solve the cold case of the homicide of a female university student that occurred in 1980. He’s a hot-blooded, humanistic investigator who uses mostly instinct and perseverance to track down his leads.

His methods are a far cry from his urbane present-day counterpart, played by Yoon Hyun-min (Beautiful Mind), who uses only cold cut facts and hard forensic evidence to determine his suspects. Despite their initial misgivings about each other, their unorthodox partnership leads to results in their pursuit of a seemingly unsolvable case. Lee Yoo-young (Fatal Intuition) plays a psychology professor who profiles serial killers and joins the investigation.

In the teaser, Choi Jin-hyuk rides an old-fashioned bicycle along a tunnel while humming to Cho Young-pil’s famous ’80s hit “Leopard of Kilimanjaro” coming out of the rickety cassette player strapped to his bike. When he emerges on the other side, he’s no longer in his time, but suddenly in a wholly different era—present-day Korea—where the pop song IOI’s “Pick Me” plays loudly from an adolescent’s earphones. Wondering at all the modern marvels, Choi Jin-hyuk thinks inside: “I know I definitely was in 1986…”

OCN’s Tunnel will air in March after Voice finishes its run. 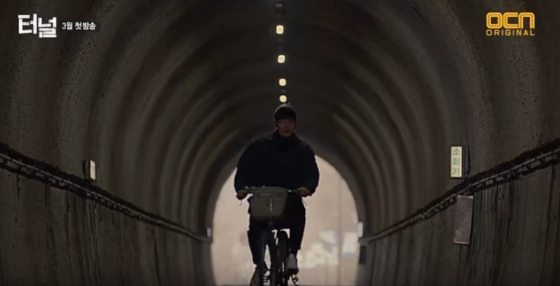 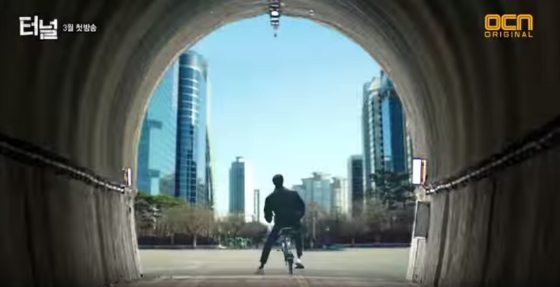 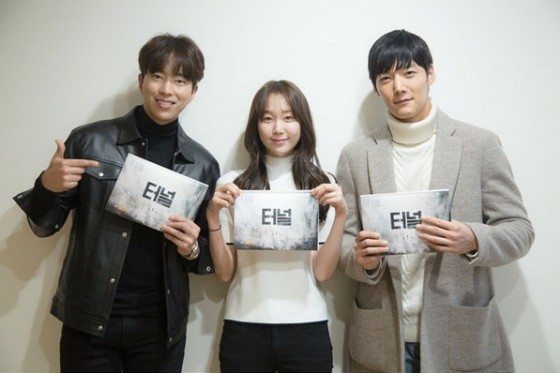 Oooooohhh~ sounds interesting! Count me in.

I'm currently watching Signal, so the synopsis kinda gave me Signal vibes, which is good.

What kind of injury did Choi Jin-hyuk have, though?

Here's an article from Soompi:

"Since his enlistment on March 31, he suffered a serious knee injury and received stem cell cartilage transplant surgery on his left knee. It is determined that Choi Jin Hyuk needs long-term rehabilitation treatment which makes it difficult for him to serve in the military any longer."

I'm glad he's back and feeling better. I've been waiting for his comeback since his enlistment.

This sounds a lot like the movie Time Renegade with Jo Jung Suk and Lee Jin Wook.

Currently re-watching Signal in an attempt to fill the void in my heart. This certainly gives off a Signal vibe, with the past meeting the present and a profiler. Crossing my fingers that this drama will be just as good.

4 gadis is camping on the cells village

So happy to hear another news about this drama. Choi Jin-hyuk!!!

Is OCN just trying to crank out Signal rip-off's? Hopefully it'll be as good as Voice is turning out to be!

lmao would've saved me a lot of stress

I dare to HOPE that they have a VERY good scientific and /or technical explanation for this time travel... otherwise the never endind complains of some people will be unbearable.

I'm barely surviving Voice (stopped ep 4 20 min in so I wouldn't have to be in suspense for 2 weeks - but it's still driving me mad) and they want to follow it up with Choi Jin Hyuk as a time-traveling detective?!

I feel terrible for saying these kinds of words but I guess I've been watching too many dramas...? Or maybe I'm just really coldhearted... but in any case... Sometimes I have doubts about Choi Jin Hyuk's injury and early dismissal in the military thing.... I truly very much hope that it's not the case and I really like him but... I don't know. Thoughts anyone?

It's hard to judge these things since we don't know what the actors are like in person. Is someone the kind to abuse his celebrity status or not.

To be honest, I find it ridiculous that Korean men are asked to give up two years of their lives for the military. But these are my views as a non-Korean, and Korean people themselves have different values. Therefore, I hope that the actors will go through their military service, and not (ab)use their celebrity status to avoid it.

It's not about values. It's about history and their enemy at the doorstep.

Korea is not the only country with mandatory military service.

I used 'values' loosely to refer to the situation - perhaps I should say values born out of a situation made up of history, enemy at the door. From my understanding, most Koreans agree that men should fulfil their duty (as evidenced by the backlash against celebrities who don't).

Many countries do have mandatory military service. Agreed.

Aren't military compulsory because Korean technically are still in war with their northern neighbor?

South Korea is literally in a permanent state of war especially since North Korea is always declaring it. It wouldn't make sense to not have compulsory military service.

Don't doubt or rather, give him the benefit of doubt. Military service is a serious issue in Korea and knetz are relentless in their attacks if a celebrity is suspected to be avoiding MS or opting for easier path like police unit. Most are more careful to avoid backlash than to attract it.

I truly doubt that he managed to abuse his status to get him out of the military. My country also has mandatory military service and it's treated very seriously by the government. There have been people who tried getting out of it, and if your born in Singapore(my country) even if you haven't been living here for a long time, you can never get out of it. The only ways you can get out of it is if you're dying, or seriously disabled or injured(like in his case), or if you manage to get a deferment which is usually only given to athletes and only puts it off a few years later. He will never be able to get out of it even if he is a celebrity. It's considered a rite of passage to become a man and it's the same case in Korea. Nobody will continue to respect him if he doesn't do it.

My nephew is a Marine. Now he's National Guard. Men get injured during training all the time. Sometimes they go in and maybe they've played sports, already have an old healed injury that they re-injure. I looked it up. He had the options of joining the police unit but he chose to go in as a regular soldier. Did 8 months but blew out his knee. Probably be good idea not to even speculate about such things without proof considering how damaging it could be to his reputation if people began to doubt him. Frankly there's no reason too, he's no more special than any other celeb, actually not a top star is he?

yay! More crime thrillers! Will we see a Subway (I mean the sandwich) in the tunnel ??

OCN dramas. They're only good if you just marathon them after they ends.

It works terribly for me, cos I can't control myself and just indulge in it when I marathon half a drama (like 7 - 8 episodes) in one night w/o sleep, my eyesight seemed to get worse and the end-result is tiring eyes too....so I rather wait for 2 episode for each week.....I like cliffhangers anyway...haha

Oh wow, I didn't recognize him in that first picture! Did he lose more weight? He looks a little aged.

Yeah, he does look like he aged. He had always looked more mature for his age but it is even more so now. Doesn't matter to me though. This kind of look is more versatile for bona fide man roles versus pretty flower boy types.

Reminds me of how awesome he was in Gu Family Book, as the father of Lee Seung Gi....

I know everyone is thinking about Signal, but that thing with the "old vs modern" songs and him realizing he's not in 1986...The first thing I though was "Oh~ Like "Life on Mars" but in reverse...Cool!"

I love almost everything about time traveling especially if there's more self incounters like the traveler meeting his alternate self.
Iam all up for it.

We have "Tomorrow With You" premiering this weekend and also Tunnel (after Voice). Both TWY and Tunnel are all on time travel....wow.....

Choi Jin-hyuk looked so cute with his bicycle and radio strapped on the back! :-D

i only know him for 2011's I Need Romance. And let me tell you, the scene where he kisses the leading lady in the car looks so streamy and real I thought for sure they were dating. It's the only tv kiss I've seen where I know there was ??

CHOI JIN HYUK ! can't wait for this. i have really missed him in dramaland. it seems like he has been gone longer than when you are waiting for someone to return from the army duty.
bring it on!