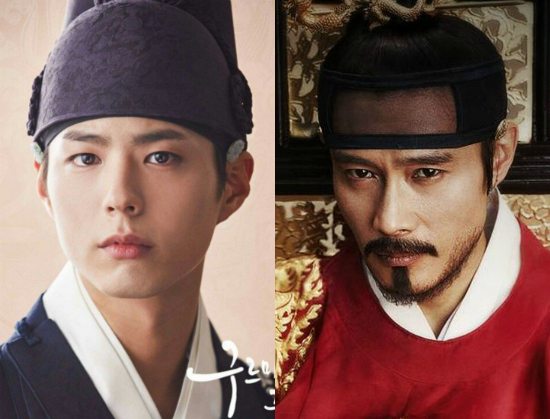 Park Bo-gum shot to fame with his performance as an innocent Go prodigy in Answer Me 1988, followed by the hit fusion sageuk Moonlight Drawn By Clouds, making fans everywhere anticipate his return with increasing impatience. According to his agency, Blossom Entertainment, he’s received many offers that they’re currently reviewing, but one in particular has risen to the top of speculation rumors—the new historical film Ansi City: The City of the Forgotten, potentially opposite Lee Byung-heon (Master, Magnificent Seven).

Produced by NEW (Next Entertainment World) through director Kim Kwang-shik (Tabloid Truth, The Return of Iljimae), this new movie will be a fresh take on the last stand of Goguryeo at Ansi City against the invading Tang army. It takes place during the Three Kingdoms era, after Baekje fell and Silla made an alliance with Tang (China) to destroy Goguryeo.

Emperor Taizong of Tang (regarded as one of the greatest rulers of China, and Wu Zetian’s first partner in Empress of China) gave the order to start invading Goguryeo with Ansi City, but the resistance his forces met there were far more formidable than expected. The entire battle scenario reminds me a lot of Napoleon’s attempted conquest of Russia: Initially the invading forces march in with overwhelming numbers and seem like they will win, but due to the natural elements and clever siege tactics, the underdog side sends the enemy troops packing with their tails tucked between their legs.

So far, no specifics have been released on either of their characters, but I would totally be down for Lee Byung-heon playing an evil tyrant whose plans for world domination are foiled by an energetic young soldier played by Park Bo-gum, or vice versa. They both wear the royal robes so well…

Both actors are in the middle of considering the project, but Lee Byung-heon has several movies already lined up including That’s My World and Namhansanseong so it’ll be a while until we see Ansi City in theaters if they do decide to sign on.

I hope they both confirm

Although I am sad because this means no PBG on my small screen, I'm glad to see him progress to chungmuro so fast. It's every actor's dream to succeed on the big screen. And with Lee Byung-hun in the film, it's likely to be a box office hit.

and I am crossing my fingers that this movie would come to Black Nights Film Festival, and maybe.... the jury loves Korean movies here, that increases the chance of movie guests.

Sounds like an excellent premise---kinda like playing chess on a battlefield. I hope PBG plays the role of the soldier. <3

This is basically "Dae Jo Yeong"'s movie version. There is English subs somewhere.

Commander Yang Manchun of Ansi Fortress is one of my favorite Goguryeo hero. Ansi Fortress held some of the most epic battles in the history of Goguryeo. Hope this movie we'll do it justice.

The cast of "Namhansanseong" so far is fantastic. Park Hae-il and Kim Yun-seok..... double the love.
I won't be surprise if Lee Byung-heon will turn down Ansi.

I thought he wanted to play a character in school uniform...

Would love to see PBG in this! If he signs on, I'm definitely watching!!

I can't stand him and can hardly watch movies he is in. I just can't disassociate his movie character with his public image of I may call it that.
Hope he turned down, so I can enjoy Gummy wholeheartedly.

he is a very shitty person but you can't deny that he's a phenomenal actor with even good looks to boot. okay maybe you can argue the latter but yeah

Because he is a good actor and because he is only human who can make a mistake and be forgiven ,judging someone should only be done by one who has never committed any mistake in their lives so i suppose we(including you) are in no position to judge.

Because he's an excellent actor and people go to watch his movies, not sit like a jury over his personal life!

I'm even more surprised because, its not an abuse scandal, drugs or prostitution. Its a scandal of infidelity between him and his wife, who hasn't said anything btw( maybe she wants to settle her marriage or just deal with it privately, but its her pejorative). He didn't make those marriage vows to you!!!!

thanks a lot for this comment, i wonder why some people can't make a distinction btw reel and real i don't care about what happens in their life as long as they don't kill or abuse others and they've moved on with their lives so should you

i strongly dislike lee byung-heon too, and i also find it endlessly curious that he's been able to get away with as much as he has. but it's NOT because of his most recent cheating scandal. disgusting as that was, i agree that ultimately it's between him and his wife, his child, his family.

but what happened in the case of the canadian gymnast/kang byung-gyu is what i can't forgive and why he's despicable to me. from my understanding, he/his ceo? ended up ruining kang byung-gyu's career just to cover his ass. what he did to the canadian gymnast was bad enough, but what he did to kang was just plain dirty. in this case he DID hurt someone else to save himself.

so. it's not just the cheating.

You have to be objective. Try watching his film at least 1 of these...Joint Security Area/ Masquerade/ A Bittersweet Life/ Inside Men.

Let me know if you are not moved by him or even the film itself.

I cannot give more reasons how great he is as an actor if you have have judged him already :)

He acts great. And if you have seen his movies most of the time they're with ensemble casts consisting Chungmuro's crème de la crème actors. It's hard ignoring him completely if he's almost always in the high profile projects.

Dig deep through that pile of offers, Blossom Entertainment. Are you sure there are no school themed projects, or projects that require Bogum & SJK to play brothers separated from a young age?

Lol who am I kidding, I am excited, the history behind Ansi sounds great, alongside LBH sounds even better. These two actors, should they accept, would be riveting on screen. What about that other Royal Magician movie thing?

Not to complain coz i never get tired of seeing him such an amazing actor & his film as collectible pieces.

If ever he sign up for this film, i will be thrilled to see PBG in it.
Yes a tyrant & a soldier is vividly perfect.

Lol well maybe he'll wear an ancient school uniform. But I hope Park Bogum won't just be in Chungmuro now that he made it. Starring besides Lee Byung Hun will surely help him to grow his acting abilities.

I'm not sure about this tho.
Bogum sure is the power actor of Korea now but I think he's not yet prepared for a big project like this. I like him in Reply 1998. Taek was the most well written among the reply guys and he nailed it. But I was not so well impressed during MDBC. Yes, he has that distinct facial expressions but seems from scenes the emotions are not well matched. This is my advice as a fan, i think he should focus first more his position as prince of drama. He's young, he still has plenty of time to nurture his talent and proceed with chungmoro.

This casting will be jackpot if it happens. Plus they are both good actors. It will be interesting to see. Hopefully the script and director will be solid. Just please Bogummy stay as nice and blessed as you are. Don't get influenced. lol.

One is known womanizer and the other is a "woman" lol perfect combo.
Didn't watched any of LBH's movies.
I'm not sure with PBG. Didn't watched R88 and got bored with Moonlight. I saw him person by the way, he has that "gay" aura really. Yikes