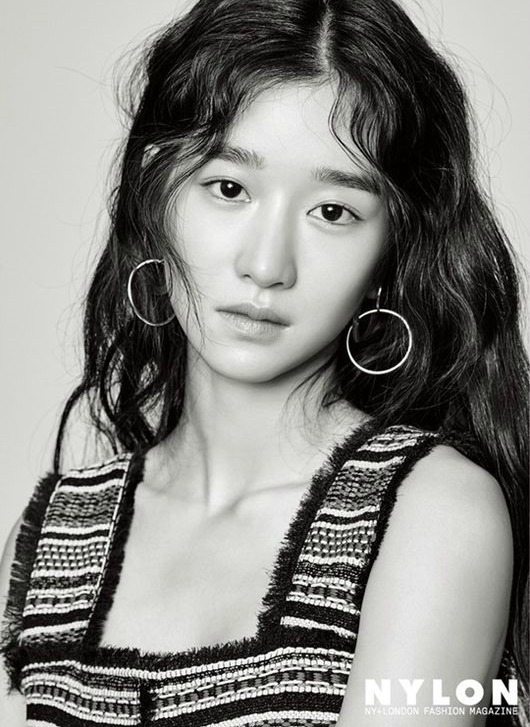 Seo Ye-ji (Hwarang) has been offered a role as a lead in OCN’s upcoming psychological thriller Rescue Me, as the damsel in distress at the center of the story. Her character is described as a graceful, quiet young woman with porcelain skin named Im Sang-mi, whose soulful eyes reflect both deep pain and an inner strength. When the character was a high school student, her father’s business went bankrupt when his business partner betrayed him, and their family began crumbling under debt, so they moved from Seoul to the countryside. And somehow, she ends up at the center of a mystery surrounding an eerie pseudo-religious cult that she’s desperate to escape.

Rescue Me is about the life-altering moment when a girl in an alleyway whispers quietly for someone to save her, and a couple of unemployed youths heed her call and come to her rescue, leading them down a mysterious rabbit hole of unexpected events. It’s based on a serial webtoon that ran from 2011 to 2013 titled Out of the World, and will take pseudoscience and cult psychology to the next level by taking the realistic situations that are depicted in the webtoon and combining them with completely new characters for the drama.

I don’t know much about Seo Ye-ji to be honest, but she does fit the character description aptly. She’s also young enough to play a high school student (Moorim School), but she’s played older roles before too (Last, Superdaddy Yeol), so I wonder how the demographics of the rest of the cast will be. Her last role as an icy princess in Hwarang was pretty much the opposite of this character, but it might be nice to see some warmth from her as a helpless girl trapped in a frightening situation.

Casting is underway, but there’s still a long time until we’ll get to see this drama onscreen. OCN has it slated to broadcast in the latter half of the year, after both Tunnel and Duel.

she looked ice cold in Hwarang, I hope she shows more range of expression in the future

She can't act, that's all. She's so bad in Murim School, Last, Super Daddy. I don't know about the rests.

If she flares her nostrils one more time...

Such a poor actress and totally over the top in her reading of the script. She was unbearable in both Moorim and Hwarang. Here's hoping she gets better.

Anyone else thinks she looks like Kim Hye In from Entourage here?

I thought OCN only broadcast 3 dramas a year?

Me too they seems on the roll this year, maybe Voice success encouraged them.

I love Seo Ye-ji. She isn't the most impressive actress, but so far I like her acting. And trying different genre would be a good thing too.

Can this drama not use the "serial killer of women" storyline on this one? Because I'm tired of seeing women being killed for the sake of "storytelling" (which happens everywhere, not only on this channel).

OCN dramas are usually both interesting and smart. I hope to see a building friendship on this one.

This girl has an interesting look.

I agree about this, women being kidnapped killed or mistreated abused for the sake of the plot.

Kdrama famous rule: woman is a victim & oppa will come to save her

Not very fond of her acting. Saw her in hwarang and moorim, she veers from being bland to being ott.

Completely agreed. Not really an actress, but the shortage of good young actresses in K-dramas (although writing that I'm shocked to learn she's already 27) is striking anyway.

Yeah there just seems to be this void of prominent, decent female actresses in their early 20s

More like the good 20something female actresses are largely stuck in second lead roles and hardly given opportunities until they've proven themselves about ten times over. And when they are, they're kicked to the kerb if the drama isn't a success, or relegated to nothing in later projects (Lee Yubi, Kang So-ra)

I mean, there's zero reason why it should have taken Kim Ji-won all the way till 2017 to score a lead role on public broadcast.

Not sure it's about proving yourself ten times over or just the state of the industry which does not operate on talent or success. Actresses who have had a breakout like Kang Sora with Misaeng aren't too hasty to shoot loads, mostly because it pays not that much and the working conditions are horrific even for lead actors. However you make good money when you have a hit and you follow up with endorsements. So I think the ones we are left with are those who don't really connect with audiences. Not too mention darker truths but yeah. If they were paid more and treated better (and were offered other types to play than damsels in distress) they probably could be persuaded. Instead it seems they prefer to minimize appearances and shoot ads (and movies)

Hwarang did badly with her character. I think I loved her most in Potato Star sitcom. She is fit for the role here, I wouldn't mind if she signs but I hope to see her in something funnier.

I liked her in Potato Star, which I believe was her debut drama. From that drama, I learned that she trained extensively as a ballet dancer.

Unfortunately, I've actively disliked her in everything I've seen her in since (I agree with the Beanie above who said she tends to be bland or OTT). Hopefully I'll like her better in this role.

Don't love the title and plot.

Loved this webtoon. The male dynamic is what is central in the story though. I hope they have a much more significant male cast to sell it. Seo ye ji is a mystery to me. She has debuted fairly recently but has had a ton of roles and visibility some young actresses could only dream of come to think about it, still no one really has acknowledged her existence. Someone suggested Go Ah-Sung online for this role and I could not agree more.
In Last, she was announced as a lead, but got very little airtime since the focus was on the boys. I tink this is what they are going for here. I would watch it though. I am thrilled OCN are adapting this.

Ahh Go Ah Sung will be perfect for this role. I saw some of SYJ's parts in Hwarang, she was quite good with her cold character bur not sure if she will be able to pull off the damsel-in-distress heroine. This role sound fit for Go Ah Gung or Moon Geun Young.

I think she's really pretty, but she often overexaggerates her voice which makes her acting unbearable to watch for me. I've only ever seen her (I think) in Hwarang and I always skipped her parts because she always sounded like she was about to announce world destruction or something.

Her voice is naturally thick and strong but i agree with you about her making it sound more stronger than it already is..
Maybe it's because of the roles..

Different tastes I guess. Her voice in Hwarang was music to my ears, much needed after the grating screechy voice of the lisping queen.

Oh god I agree with the lisping queen tho hahahaha

Yeah, I think the vocal delivery of her lines should be used in theatre plays or musicals, but not so much in dramas. It tends to sound more exaggerated than natural.

Sigh. The year of the thrillers.

I've only seen Seo Ye-Ji in Hwarang, where I was initially excited about her fighting spirit and no-nonsense attitude (plus her voice suits sageuks), but I blame the writing for making her character ultimately pointless.

I only saw her in an episode of Potato Star where she was hilarious being petty and fighting with her brother (played by Go Kyung Pyo).

Anyhow, she has potential but needs good directing and writing. I'd love to see her in a proper sageuk, but will be skipping this because I don't like the plot.

Contrary to what people are writing here, I am not judging their opinion by any means but she really hasn't done that many dramas . Quite recently she has had back to back appearance in dramas in varying degrees. And about her voice, its naturally thick. I think she needs good projects, her project choice since Last hasn't been that good. Then again, she hasn't done much so maybe now its all she's been offered without much say in any of it and is taking it. She is not an idol, neither an extremely well liked star so I get her trying to keep herself visible with more projects. It also gives her chance to actually work on her acting skills. Another reason for her being in spotlight might have to do with her recent movie about suicide pacts "Another Way", I think it received positive reviews for both her acting and the story.

Sigh...so why are we watching someone "improve" again? She debuted in 2013 so she's done quite a bit comparatively to girls arguably better. Apparently people seemed to prefer her in Potato star which is her very first project and a sitcom. I understand idols being bad in dramas because they're bankable. Does not mean I like it or watch them. But nugus?

Like I said people didn't dislike her in Hwarang despite the shitty role and her new movie earned her some good points acting wise from the critics, that maybe the reason. Also, her management is active in promoting her despite her not being so popular as a face. Why others don't get their due who maybe or ma not be better compared to her is quite hard and complex to answer. As for Potato Star Sitcom, it was a good role. Since then, she has hardly had any strong roles. I hope she does get them someday.

I don't see many people liking her acting in Hwarang. Go Ara was even worse though, as washer co-lead in Night Watchman. Kind of strange to blame it solely on the material someone is given as if it was not connected to abilities and talent. Contrary to the "work hard" spiel in Korean entertainment, there are people who are gifted and those who will never be, however hard they work. Goo hye sun will always be an unjustifiable actress however dreamy and artsy she thinks she is. So I don't know, hire people who can deliver lines and people will watch.

I'm excited for this kind of drama.
Looking forward to it coz OCN thrillers are the best.
Way to go OCN!

She has a very cool voice--lower than most actresses'.

Looking forward to it because of the description "soulful eyes reflect both deep pain and an inner strength".

Wee haven't watch Hwarang. But SYJ may not be popular she made sure all her acting is powerful. I like her in all her short time stint and her leadstars (even Moorim School). I just wish they will giver her solid material one day!

She's improving more and more with each project she takes. I've followed her career and I'm glad that she takes a variety of roles to showcase her talent and develop her range. I was very impressed by her acting in Hwarang and I'm looking forward to seeing her in a different role.

I like her in hwarang and also in save me drama i admire her voice...for me she's try a level best for this drama and i found her strenght of this drama how to make her looks tronger...