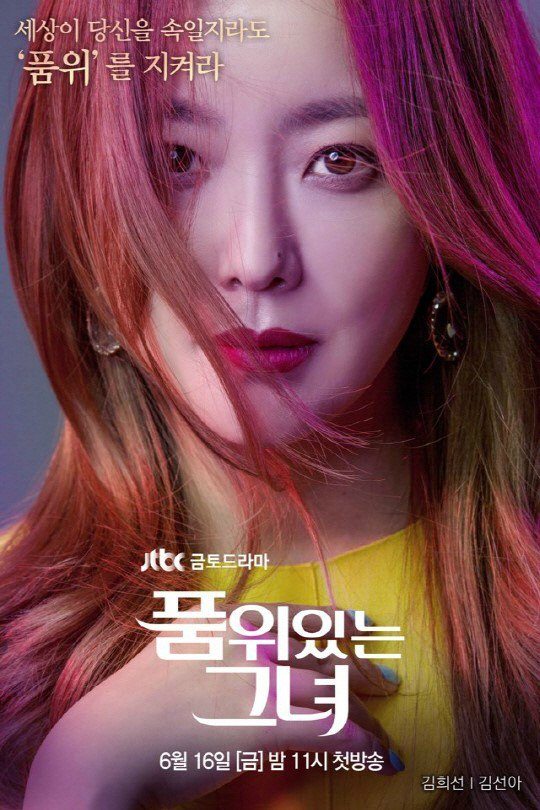 Man to Man has only just begun airing on JTBC, but its follow-up drama Woman of Dignity is already releasing character posters of its leading ladies. The 100-percent pre-produced drama stars Kim Hee-sun (Angry Mom) and Kim Sun-ah (Masked Prosecutor) and is described as a satirical human comedy about two women living in the chaebol world.

Kim Hee-sun stars as Woo Ah-jin, the sophisticated and smart second daughter-in-law of a chaebol family. She is described as a confident, elegant woman who has it all. Kim Sun-ah plays Park Bok-ja, a mysterious woman with a heartbreaking past who will jump into Kim Hee-sun’s perfect life and mess it all up. I already feel for Kim Hee-sun, but I love Kim Sun-ah, so hopefully her character has some redeeming qualities.

The posters released are so gorgeous. How are these two women in their forties? The poster shoots were said to be a lively affair with both actresses immersed in their characters. I love how Kim Sun-ah looks like a porcelain doll in her poster, which alludes to her cool character who appears perfect in order to fit into chaebol society. On the other hand, Kim Hee-sun looks every bit the charismatic woman who has it all, complete with dazzling highlights. However, something in her expression makes me think that maybe it’s all an act as well? At the top of both posters it reads, “Keep your dignity even if the world deceives you.”

Expectations are high for Woman of Dignity because it’s written and produced by the same company behind JTBC’s recent ratings hit Strong Woman Do Bong-soon (Baek Mi-kyung and JS Pictures). And as if things couldn’t get any better, the drama is directed by My Name Is Kim Sam-soon PD Kim Yoon-chul, who has since directed JTBC dramas Madam Antoine, Could We Love, and Can We Get Married. It’s a solid team, plus it’s pre-produced, so I’m hopefully optimistic. 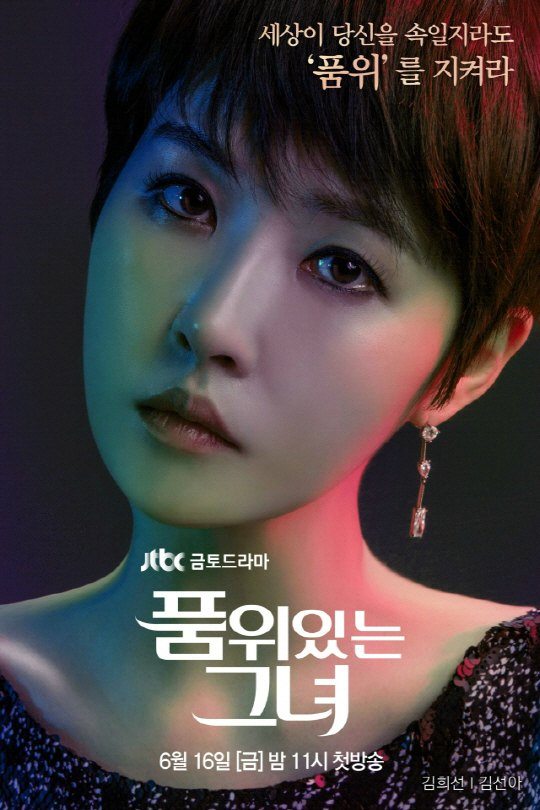 I miss Kim Hee-sun sooo much! She was amazing in Angry Mom, and I'm glad she's back in a top cable channel!

I can't wait for this! I'm ready for Kim Hee-sun to be back on my tv screen.

It sound interesting. I plan to watch Man to Man too.

i like both of them so hopefully it'll be a show that'll keep my interest. they both look gorgeous

Positive vibes all the way for this drama! We need more dramas with women as central figures and badass depictions. Both ladies look gorgeous, if @buhdoop didn't mention the age I wouldn't have even thought of it!

SAME! I was surprised that they're already in their forties! ?

Loving these leading ladies!! I could use a little more info on the plot to get more excited... but very vague is usually how it goes with drama intros. Definitely want Kim Sun Ah back in my life! Although I remain a tiny bit apprehensive because I usually prefer her in goofy/approachable characters (Samsoon or Scent of a Woman), rather than her charismatic/ambitious ones (Masked Prosecutor, I Do I Do).

Lol, I guess The Package is going to remain in drama limbo a while longer.

Can we just jump straight from bromance to womance, please? There is such a dearth of womance-themed dramas in dramaland.

I do not know why but in Korean dramas, the female leads could not interact as easily as the male leads who become each other's friend and rival at the same time. They mostly paint women who cannot stand a moment not trading barbs at each other.

I mean womance is achievable.

I SEE YOU JTBC! YOU ARE KILLING IT RIGHT NOW

These two ladies are gorgeous and well-loved!! And I quite like the solid team that's been rounded up for the show. Hail, the year of JTBC!!

Yes! I missed Kim Sun-ah so much!

I bet she drinks unicorn blood ?

Probably in the minority, but the screenwriter, production company, and pd don't give me that much excitement. I felt SWDBS needed better editing and the transitions were awkward on some parts. I also felt there were many fillers in that drama that can easily cut down the drama into shorter episodes instead of dragging into long episodes. Recent dramas have been getting longer and longer. Madam Antoine had characters imo were not likable. Hopefully, they improve or else it would be a waste for both Kim Hee-sun and Kim Sun-ah .

You're not alone~ I totally agree with you!

I thoroughly hated Strong Woman too, but I'm hoping this is better for the sake of Kim Sun-ah and Kim Hee-sun. Maybe since it's not a romance like Strong Woman, there won't be many problems. *fingers crossed*

See, you're not that alone. SWDBS was in fact full of fillers...apart from the cute moments and the psycho ones...it was as ll not much needed. Further, I don't know what kind of 'feminist' message it was trying to give...that women can't control power....if they get power (superpower in this case ) they totally buly men and ofcourse a man has to be there to teach, help her, guide her to learn to do that.

No hard feelings, fans! Just my observation. and @bananachocolate , so there goes a more unpopular opinion.

And the fact that they made Ji Soo's character the most misogynistic asshole possible. Feminist message my ass.

I thought of watching it too, until I read it is from the same writer. I think this not a romance centered drama, but the romance and the charm of the two leads was what carried strong woman throughout. So, I am not sure how it is going to work in this drama but still I ll watch the first few episodes.

Thank yoooou. 100% on point! Editing and transitions were so off at SWDBS that I had to drop it. I've never had that happen to a drama before. Bad story telling.

whatis ~
Bad story telling ! It is pandemic in the Kdrama industry.

While I agree that there are lot of fillers but I can't dismiss the drama as total trash. The concept was something new...KDramas never had a woman in the center of action, especially when something needs to be taken care of, and do bong soon did that when it has two perfect male leads. I bet we will see more woman action centric dramas in future. Also I agree with the filler parts and that the transition wasn't handled well but nonwithstanding the bad parts I enjoyed the romance , which is the center of the drama. The drama deserves attention for the uniqueness of the story if nothing else. Also call me a loon but I liked the thugs arc too lol, they kind of grew on me on the later episodes. And the school gang too. It's just maybe the drama could have added more to the storyline and dealt with the editing in a better way.

This screenwriter doesn't really inspire confidence, first My Love Eundong and then Do Bong Soon.

I'm actually wary of the writer now that I finished SWDBS. The plot of this new drama doesn't sound that interesting too. I hope this drama turns out to be good though. They got a capable cast.

Oh, I really thought that first pic was Oh Yeonseo. I was wondering how she could be filming My Sassy Girl and this at the same time.

OYS is named as little Kim Hee Sun for this reason, I also thought the same as you too! They have the same eyes and nose.

I really hope for a drama where the female leads could rely on each other as friends not (fr)enemies.

Both are my girl crush I really really can't wait!

I hope the script is worthy of these two ladies.

I love Kim Hee-sun! And Kim Suna, I'm in the mood for some City Hall rewatch.

Hello fellow City Hall fan! I really hope this is a hit for KSA too. I've missed her!!!

Gosh I miss KSA... hopefully, this drama would be a hit drama for her after the couple of misses. Fighting!!!

Anyone else thought that Kim Hee Sun looks like Oh Yeon So? o_o

These posters are amazing!

I'm not here for the production team or the writer (I haven't hated a drama like I hated SWDBS in a long time), but I'm completely here for KSA and KHS, so I'll give it a chance. Hopefully it'll be more interesting than it sounds.

Wah Kim Yun Cheol is back. I really miss his work. I really hope it will work for him this time. Hope this time the script will bring the best of him like in can we get married. I just be pretend the writer is drunk when writing swbd.

Damn am mesmerized by both the ladies!

I hope the writing is better than SWDBS. As long as the writer stays off comedy, I think it will be great.

Look good. So exciting to see Kim Hee Sun on the screen again and this times with Kim Ah Sun. Both are my favorite Korean aactresses.