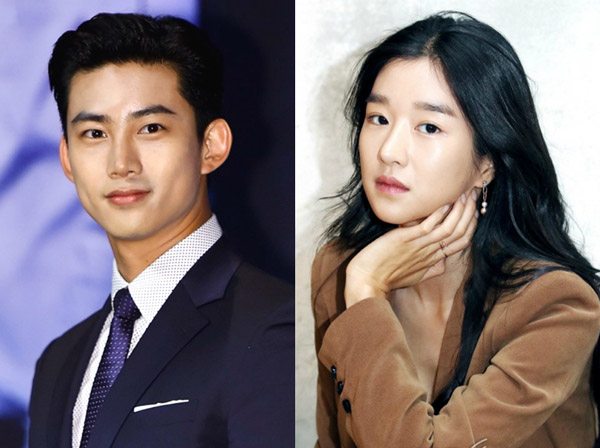 Looks like OCN’s thriller Rescue Me has gone on a casting spree, with four of its main cast members now announced. The drama recently offered a lead role to Seo Ye-ji (Hwarang), who has now officially signed on, while Taecyeon (Bring It On, Ghost) is in the “considering positively” stage. Drama veteran Jo Sung-ha (The K2) is also onboard, as is drama newbie Woo Do-hwan (The Man Living in Our House).

The inciting incident of Rescue Me, which is based on a webtoon titled Out of the World, occurs when a couple of young men hear the whispered plea for help from a girl in an alleyway, and are unable to ignore it and come to help her. Seo Ye-ji will play that girl, described as quiet and calm with a sad look in her eye that shows traces of an inner strength. She’s experienced a series of hardships, beginning in her high school years when her father’s business fails, he falls into debt, and he’s betrayed by his business partner, leading the family to leave Seoul for a new life in a different region.

Taecyeon’s character sounds like your usual perfect drama lead—he’s handsome, smart, good-looking, warm-hearted, and cheerful, although he has also always felt the burden of needing to always be the best. I guess you can’t have everything? He’ll be one of the guys who steps in to save Seo Ye-ji when she asks to be rescued.

Woo Do-hwan plays a character with a quiet and introverted personality and a cold appearance, and the disadvantaged circumstances of his childhood cast a gloom over him. Jo Sung-ha plays an a serial scam artist who’s gone to prison on eight priors, and while serving his time dabbled in all sorts of religions. Upon his re-entry into society, he pulls more cons impersonating ministers and monks and ends up creating his own bogus religion where his followers call him “Yeongbu,” or “Yeong’s Father.”

I like the hint of mystery in the premise, as well as the cult bent of the plot, which seems new and interesting. I can’t say I’m thrilled about either lead, although I do think they were fittingly cast based on the character descriptions. Seo Ye-ji does do still and calm effectively (even if I’d argue that it’s overly effective, in that I find her lacking in presence), while I have always found Taecyeon more convincing being bright and upbeat than anything else. So let’s think optimistic thoughts.

Rescue Me will be written by a new writer who started off in OCN’s open competition, Jung Yi-do, and directed by a film director, Kim Sung-soo of 2013’s mystery-action-thriller Genome Hazard and 2006’s action noir Running Wild. It will be a weekend drama following human-clone-face-off thriller Duel, which follows currently airing time-slip thriller Tunnel, putting its premiere in July. 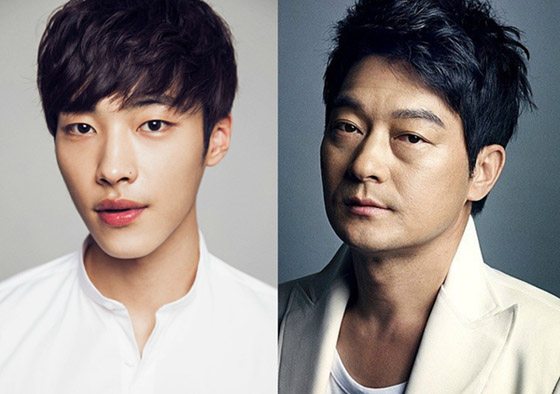 Coming on the heels of Sung Joon casting news, and I've always felt that they both lookalike.

I'm okay with Taecyeon in this, the comforting part is the 'heartwarming and cheerful'. As long as his not some emotionally repressed Chaebol, we good!

This is sound like a romantic drama, OCN decided to try different genres.

Not excited about the plot since there's a religion aspect, i stay away from anything related to religions, also not a fan of SYJ's acting. So I might pass on this.

When I first saw his photo, I thought it will be his military enlistment news....glad its a drama casting news. I think he really has a thing for mystery and supernatural things. Hope his movie, 'House above the Time' also does well.

I am not thrilled with this casting news but the premise looks interesting. Taecyeon - I will be happy if he can perform at least half of what his group member Junho did in Chief Kim.

As an actor Junho is way better than Taecyeon (sorry Taec). Fingers crossed directors noticed Junho in Chief Kim, and that he gets some offers soon!

Two wooden actors as the leads.. an easy pass.

No other actor available, eh?

Only two words came up in my mind when I saw Taecyeon and Seo Yeji in one sentence: Oh boy......

As someone who has suffered from slipped disc since her 20s, I have a special affection for Taecyeon, who has the same problem. Super proud that he is going for active service irrespective of his health conditions and worked extra hard to qualify for active service. And glad if he takes up this drama or any other. It would not be bad to see him on screen once more before his enlistment.

I didn't know that about him (or you!) Bless you both! I'll have to go look up when he's thinking of enlisting. ^^

And here I thought he was already enlisting. There were articles about him getting surgeries and giving up American citizenship entirely so that he could go into active duty.

So he's still up for one more drama role before then?

I thought he was already signed up.

I just found out that Woo Doo-hwan was the sweet florist friend to Bae Noo-ri in the webseries "Dramaworld"! Wow his smile became a creepy grin in "The Man Living Nextdoor"...

Taec has improved in Let's fight ghost. Not so keen on her

Whyyy OCN whyyy?? Couldn't it be anyone else but them??

Taecyeon seriously need to change his acting way, he always try to make his character 'puppy' 'cute' 'pretty' instead of focus on his acting. Although he really hot.
But Seo Ye Ji.. his acting is so bad, why they cast her?

I'm actually pretty interested in this, I want to see what K-dramas will do with a cult premise. I've never seen Taecyeon as a terrible actor, although I think he improved a lot in Let's Fight Ghost. If he signs on, I'll be interested to see what the teasers turn out like. ^^ Rescue Me, fighting!

try "Who are you?" That got me burned with him forever. no more! :)

Lol that's actually the first show I saw with him in it. There was nowhere to go but up! I was admittedly green to kdrama then, but I actually still liked him better than the female lead there. ^^

will it be a story of two wax figures, whose emotions only show through microcracks in the surface?

I am getting more and more disheartened with the trend to cast inferior idol actors instead of actual talented actors. I don't mind idols themselves being actors as there have been some excellent actors who came from idol roots (like Park Hyung-Sik). But dramas are constantly casting idols who can't act. Taecyeon, Suzy, Yoona, etc.. Or they will cast these brand new untested idols who have almost no dramas under their belts as leads right out the door. Like Kai in that upcoming drama Andante, Song Ji-Eun from upcoming My Secret Romance, Joy in the Liar and His Lover (I've not seen this yet so I don't have an opinion on her acting). Seems decidedly unfair that actors need to sweat and grind and push themselves to get good roles and it usually takes years and many dramas before they get a lead role. But these idols just walk in and get the roles those actors have been pushing themselves for. And not just that, some of these idol actors are just bad but still keep getting lead roles. I don't blame the idols taking these roles, I just wish production companies were better about doing actual auditions and casting actual talented actors over who is the current popular face of the week.

With your examples I think it's only unfair because they haven't been able to prove themselves yet. I've only seen Kai in a webdrama, I don't think he was terrible but the scope of talent required was minimal. Though you haven't seen Joy I can say she's quite green in her acting but her role is similar to who she is in real life with focus on the musical aspect is why I don't mind her with the role. She's not even the worst in the drama. I think she's sort of like Eun Ji, who does very well because she's been (type)casted into roles very much like herself.

As for the other idol actors you mentioned, I cannot agree more. They've had several tries time and time again to prove themselves with little improvement. Admittedly I like Taecyeon more since BioG when I hated him in Dream High, but he's still not versatile like D.O or one who excels in co-star chemistry like Hyung Sik.

Casting directors just need to cast talent (who aren't painful to look at). I don't give a shit what their bg is. I can forgive idols for wanting to take these jobs and establish a name for themselves. For some like Hyung Shik, it might be the only thing they have left if they if their group is a flop and disbands.

"Casting directors just need to cast talent (who aren’t painful to look at). I don’t give a shit what their bg is. I can forgive idols for wanting to take these jobs and establish a name for themselves. For some like Hyung Shik, it might be the only thing they have left if they if their group is a flop and disbands."

Exactly. I have no problem with idols being cast, my problem is when they constantly cast idols when it's clear they can't act. I also wish they would cast idols in side or secondary roles first and not cast them as leads right away. This will let them build up their careers first. I can also forgive when actors in secondary roles aren't very good, but not leads.

And like I mentioned I don't blame idols at all for taking these roles. Unless they hit it big as solo musicians they wont have many prospects after 5-10 years once their groups disband. Acting is the next logical step for a career.

that is one show I'll be quick to pass on

I quite like her, far more than I like him. I've followed her work in Last, Moorim School, Hwarang, and Night Watchman. She's not bad, though I confess there's room for improvement with her acting, but she improves with each project. Considering she's being cast with someone who is less skilled at acting than she is, it's not a stretch to see why she's in a lead role in this drama.

same here, like her quite a bit more than I like Taecyeon, who bores me to tears. Couldn't even watch let's fight ghost because of him, but I loved Seo Ye Ji in Moorim School. She didn't seem wooden to me, especially compared to all the other idol actors, and had a really soothing presence on screen. Hope to see more of her in dramas and less of him, but will check out this one anyway, it sounds like a reverse harem x]

I was interested in the premise of this show, but so disappointed in this casting.

I don't understand why K dramas don't give those scene stealer/side kicks (who are not necessarily handsome/second lead) a chance to be leading man material. Unless they're idols even without any acting potential.

Tacyeon should at least stick with goofy roles to hide his acting inability. Serious roles? Yikes!

hmm .. this one looks safe to pass.

The casting is gonna kill this drama... dammit..

I like TY. I am glad he has signed on one more drama before his military enlistment. More TY... I am happy! :-)