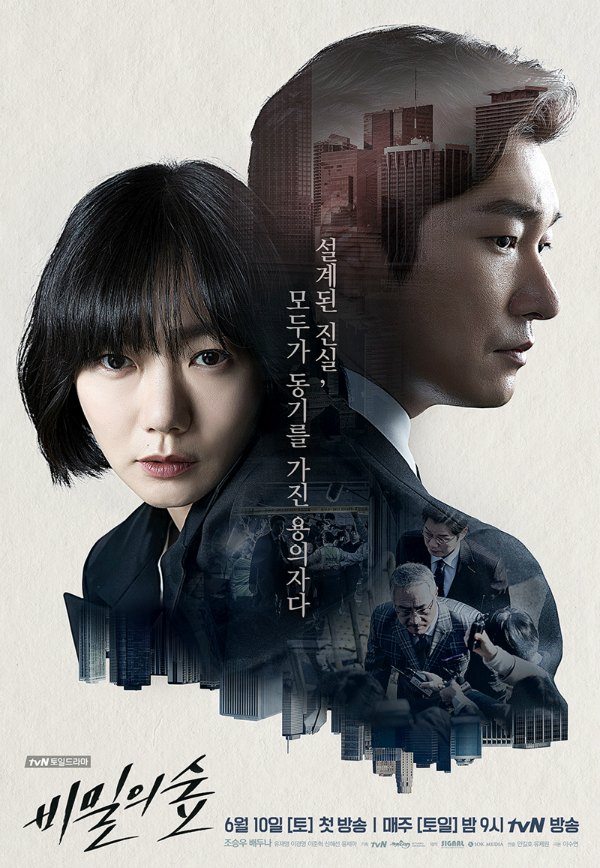 Forest of Secrets is bucking the vertical-sideways trend we’ve seen recently, and going for a more traditional layout for its first poster. tvN’s upcoming weekend mystery Forest of Secrets is a labyrinth of a story where an emotionless prosecutor, Jo Seung-woo (God’s Gift–14 Days), and a passionate police detective, Bae Doo-na (Tunnel), work together to solve a series of murder cases involving deep-seated corruption in the prosecutor’s office.

The poster starts with structured and orderly skyscrapers in Jo Seung-woo’s head, perhaps alluding to the cold, logical way he sees the world. But then things start to get murky as the image moves into the depths of the city, as it merges with Bae Doo-na, and opens onto the chaotic crime scene in the last trailer, and finally onto the seedy underbelly of the city and the corrupt people who run it, featuring a stoic Yoo Jae-myung (Strong Woman Do Bong-soon) and Lee Kyung-young (D-Day) fielding aggressive reporters.

It ends on an upside-down skyline, perhaps a callback to Jo Seung-woo’s intent to turn the tables on everyone. The main copy on the poster is the series tagline: “An orchestrated truth. Everyone is a suspect with a motive.” Regarding the posters, the production team said they wanted to visually illustrate the relationship between the prosecutor and police detective as they chase the secret hiding in the dark parts of the city. They also wanted to show that the secret they are chasing contains a mysterious case involving people they know.

I like the styling of this drama and the musical choices in the trailers. And as a 100-percent pre-produced drama, I’m confident they can carry the tone throughout the series. Hopefully, they can keep the pace up as well.

Forest of Secrets will air on tvN on Saturdays and Sundays beginning June 10.

Is Bae Doo-na in Tunnel?

Ah okay, thank you. I was mightily confused

For a drama that seems so interesting, they went with an awfully basic poster. Looks like someone's entry for a Photoshop contest.

It beats bending your neck to see it properly :D

We will meet in real soon, Dorna. It will be good for both of us. Stas.

why do I feel like I have seen the same exact poster at least 7 times?

and why is her head growing on his back

He's got buildings, sky and people but she's got nothing...

Lol, I thought the same thing! It looks awkward...Maybe the poster is supposed to refer to the fact that they will work together, and are such a team that it seems like they are heads of the same body? (I am probably overthinking this!)

I thought exactly the same thing!

You're not alone in this. I bet there are few more dramas with similar posters, like Yongpal and Night Light.

That is a very aesthetic poster. I love it.

Love it! It matches stylistically with the dark and urban feel of the trailers. I am looking forward to this show more and more.

Glad it didn't go with the sideways trend. I think the poster is pretty intriguing. Both leads are going to work together in the drama so their images overlapping here reminds me of their connection. Has an cool, slick city feel to it overall, but her blank stare was the first thing I noticed.

Am I the only one who feels like I've seen this poster before? It's like this design style has been used quite prominently in alot of recent dramas...

Loving the poster design! I know the double exposure has been done before (check Yong Pal) but this has a clean mysterious feeling to it that I like as well! ?