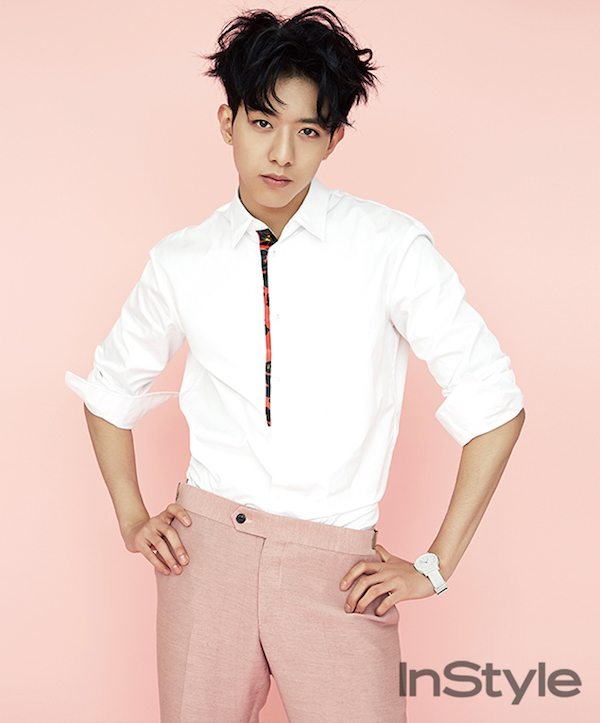 Especially after Cinderella and the Four Knights, I equate CNBlue’s Lee Jung-shin (My Sassy Girl) with sweetness, so I was happy to hear the news that he’s been offered a lead role in upcoming webtoon adaptation, Longing Heart.

The original source material is a fantasy-mystery rom-com webtoon that was released from May 2015 to June 2016, with a time-slip element (this is probably the fifty-bajillionth one so far). A man named Shin-woo regrets letting his first love go ten years ago, because he didn’t have the courage to confess. However, he gets the chance to win her again when he travels back in time, and this time he’s armed with the knowledge that she liked him back then too. Unfortunately, he has a pretty strong competitor: himself from ten years ago. The present Shin-woo and the past Shin-woo engage in a fierce (and probably funny) rivalry to win their love’s heart.

It brings an entirely new meaning to: “You are your own worst enemy.” But I can totally see Lee Jung-shin going through petty adorable jealousy stages against himself. I do wonder if they’ll cast another actor to play his older/younger counterpart, or whether he’ll be playing both. Ji Sung was great in Kill Me, Heal Me in playing two personalities engaging in self-rivalry. But in my mind, Lee Jung-shin is still a bit green, so I’m not sure how he’ll be able to distinguish his “two” roles.

Well, at least the plot sounds really cute. Longing Heart will air on SBS Plus starting this November.

Being jealous of one self might not be a (prevalent) trope but I find it hilarious when a main character becomes stingy whenever love interest is raving about the former unknown to him/her! ?

Lol! Reminds me of Lee Min Ho in Legend of the Blue Sea and him hating on the Ramyun Guy aka himself! :P

Also like Healer, my favourite love triangle ever - Bong Sookie vs Night Errand Boy! Gah, that was so fun!

The plot sounds great, fighting with oneself.

Jungshin!!!! Omo, I love it when you're in a love triangle with yourself (HELLO, PARK BONG SOO). So excited for bb's first lead role!

Omg, yes! I need something for him after this disaster of a role in My Sassy Girl. I loved him in Cinderella and the Four Knights and hated how they screwed up his character in Sassy. This role sounds interesting, so I hope he'll take it.

A much less cute premise would be for him to travel back in time to convince his past self to muster the courage and confess.

Speaking of which, there was a film with the premise you mentioned called 'Project Makeover'. It starred Go So-young as the adult female lead who time travels back to her adolescence period and tries to bring her teenage self and guy friend together because the friend became a successful self-made man in the present haha!

SBS Plus.. so not the real SBS? Btw this would have been so much stress relieving, if possible in real life, I feel like punching myself at times :D
AT least the good thing is, this is an adaptation, or else, the story sounds awfully similar to the current manhole erm.

SBS Plus is a cable channel belongs to SBS.

This is sounds like Manhole and Operation Proposal! Are they running out of new and creative ideas!.

Am so glad to see him get another main character role. Looking forward to this.

He has the visual and for me best acting potential in Cnblue.

1. I thought we were done with time slip dramas

2. Woah his rival is himself????? That's kinda dope and will be interesting to see

Wow so happy that every members of the cnblue are leading man of their own drama !!!!! And each one of them will have his drama coming to us soon !! So excited !!! Yong hwa was the most well-known among the boys - im glad the other 3 are getting attention too. Xoxoxoxo

I agree that he's a little bit of green and I wonder if he can act dual role, but I'll give him a benefit of a doubt.

But.. but.. what's the benefit when he's competing with his own self to get the girl? It's like.. pretty useless competition..

The present him should have helped his younger self with his knowledge, that would be make more sense imo

It's a good news. Jungshin as the lead.
Last time I think I could not see many JS in My Sassy Girl so now I hope he can explore more as an actor in this drama cos the plot seems interesting even tho similar to Manhole and Operation Proposal. Anticipating.

was watching cheongdamdong 101 which is the FNC entertainment reality show, jungshin and jonghyun was looking at yonghwa 's mi Rae choice script and stating that they have to work much Much harder in order to get a script with that many lines... AND THEY DID IT. so happy that all 4 cnblue boys did a male lead role or is currently offered. Correct me if I'm working, are they the only kpop group that all members are in the leading man territory (not talking about their acting skills here, like they are offered or did a leading man role)

Why shinwoo just why??? I hope his last name is not kang... So It's not kang shinwoo.... shighhh

SHINWOO??? they should give the role to yonghwa instead lmao kidding... from seowoo to shinwoo why jungshin role always close to yonghwa name role..lmao their not twin doesnt look a like... Kinda boring seeing Jungshin on drama there's nothing impressive abt his acting and his face is similiar to Nam joohyuk who cant take hiatus from dramas...

please for whatever reason dont put down my baby yonghwa just bcz you think jusngshin is better in acting than my baby, don't worry In 2018 when yonghwa goes to enlist cnblue will take a long hiatus and the other members will stick on dramas probably because the band will die whitout yonghwa

Are they... running out of ideas?? Why this plot about time slipping keep going on and on and on... I guess people have a lots of regrets...

I like new kind of SBS Plus. Their dramas are shorter and cute.

It'll be super cool if they can manage to cast Nam Joo Hyuk to play the younger version of him since they're known for looking alike (plus they're both of the same height aka freakishly tall). But sadly I'm pretty sure Nam Joo Hyuk is too high profiled for this already.