Two best friends from the same battalion are scouted into the National Security Service by a beautiful agent. Once they pass the initial tests, both are recruited and work to protect the nation from foreign threats. Both men fall in love with the agent who scouted them.

Two best friends from the same battalion are scouted into the National Security Service by a beautiful agent. Once they pass the initial tests, both are recruited and work to protect the nation from foreign threats. Both men fall in love with the agent who scouted them. 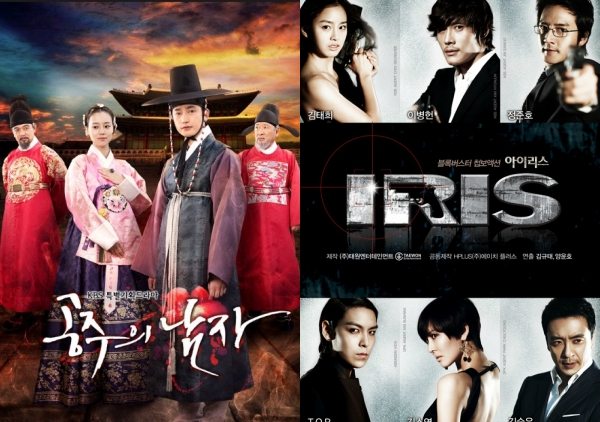 Wow, this is one ambitious project. KBS has announced a grand-scale action thriller drama called Prometheus: War of Fire for their 2018 lineup. Planning for this project commenced last year, but the station has kept it under wraps until now and is expecting to start the casting phase soon. Filming is being planned for the first half of next year.

Prometheus’s plot will unfold on the international stage, as North Korea’s top scientists privy to information regarding the country’s nuclear and long-range missile arsenal disappear in an unspecified foreign country. When their disappearance becomes known, multiple countries deploy their agents to locate and acquire the scientists for their own purposes. South Korea, of course, is one of those countries, and will send a team consisting of an elite government agent and a North Korean defector to get to these scientists first. As they race against agents from foreign governments, they’ll come across a mysterious genius girl, who I assume has something to do with their mission.

Just by reading Prometheus’s short synopsis, the show sounds remarkably reminiscent of another KBS blockbuster spy action drama, IRIS. With recent escalated tensions over North Korea’s nuclear capabilities, though, it might be interesting—or terrifying—to watch a dramatization of current events. We can expect a lot of action, as well, if CP Choi Ji-young’s credits on IRIS, Chuno, and The Princess’s Man are anything to go by. The production company behind Prometheus, JL Media Group, has worked with Choi before, as well, on The Princess’s Man.

KBS really isn’t holding back on the scale of this drama: Filming will include five overseas locations, and the show will reportedly cost 30 billion won (roughly $30 million, for those of you in the States). And in addition to casting top actors for its lead roles, the producers of Prometheus are also reportedly looking to Hollywood to find actors for their substantial number of non-Korean roles. Producers are already in negotiations to pre-sell rights to the show to an “online platform with a global distribution network” (Is that you, Netflix?), so it sounds like there’s some buzz about Prometheus beyond just Korea.

It’s pretty exciting to see dramaland get bigger in scale and reach beyond Korea’s borders, but a part of me is also a bit wary that this project won’t live up to its expectations, or outright flop in the worst scenario. Not that better ratings always mean better quality, but I feel the level of resources dedicated to Prometheus would just magnify the disappointment if it ends up not being a hit.

Whatever the result, I will definitely be following updates for the show as it starts its casting process. Between Prometheus and tvN’s Mr. Sunshine, it looks like we can expect 2018 to be the year of epic blockbuster dramas.

Just reading the headline made me nervous.

Hoo boy, as I read I thought, oh no! Cue the bad foreign actors. Fingers crossed that won't happen 🤞🏽

Ok so now we have this, Kingdom, Mr Sunshine, Lee Young-ae's drama, Noh Hee-kyung's drama and Suits for 2018. Finally K-drama land is returning back to its hey days. Let's hope these dramas won't disappoint.

Looking at the budget, I expect big names for this one.

**Is it too much to hope for Won Bin or Kang Dong-won's return to drama land?

Eh, Suits is bound to suck. None of these remakes dramas are any good. Even Good Wife was merely decent at best.

At least the other dramas you listed are original.

I'm looking forward to all the drama you mentioned. But I don't know about Suits remake. Personally I think the charm of the original Suits is in the perfomance & chemistry of the cast, and the location (New York). The story isn't really original. There's already a lot of legal drama in Korea, so I don't know how they'll make it any different and exciting.

any guesses who will be casted? i hope yoon shi yoon will get a chance. i really wish he can get another breakthrough role, its been 7-8 years since baker king. huhu.

I love Yoon Shi Yoon, but, I'd prefer it if they picked older actors - in their 30s or early 40s for the male leads, the elite government agent and the North Korean defector. Similar age for the 'girl genius'. I can't picture a younger actors in these roles, yet.

Either way - one 'Oppa' is enough. Give me a story sizzling with meat and substance if you're going to go all out!

haha. ysy is above 30. but yeah i realize he is kinda baby faced for serious roles. i imagine someone with sharper features will be casted. huuu

I think he can do serious role, maybe he should try legal thriller drama next.

Oh! Haha my bad. But now that you've brought it up, I changed my mind. As Sera says, Yoon Shi Yoon would probably do a good job - and it doesn't need to be entirely serious.

i just want yoon shi yoon to return to dramaland soon. if its a major blockbuster drama the better. hahaha
i agree with sera. a legal thriller drama might be good. the genre is kinda in trend now.
he was good as dying hyunjae in the best hit. i still remember the contrast of both of his characters in the same frame. kyaaa~ and i also liked him in mirror of the witch. imo its a great fantasy/mystical sageuk.

money # hit, they better have a damn good writer

Agreed. $30 million dollars for a 2 month show???? They could use that money to make their other shows better

I hope Kim Jae Wook is in here.

Well, I can dream

Ji Chang wook is the best man. It's a pitty though. How about a second chance for jaejong, like his drama SPY? Aww. Lee seunggi would be fit to the role. He's fresh from enlistment.

Hope none of them got casted, terrible choice

I'm nervous while reading this article. There are many ambitious projects next year, but I might end up love the underdog ones lol.

Well good luck team! Hope to hear more news especially on the castings. I think they will cast big names here, and maybe idols too.

It will be awesome if they can do it properly ala kmovies in the same genre. Thinks something like Confidential Assignment meet Berlin File. But I wont hold my breath to much with that genius girl plot. But at least we will get somewhat decent foreign actors if they also looking at Hollywood for casting?? So maybe we'll end up with Iris2018 and hopefully not Iris2-revival2018 or Athena2018

They have enough money to hire a great writer and a film director/great director but they are probably going to spend it all on overseas shoots and stuff to blow up.
IRIS was nothing to write home about.

2. The behind the scenes drama could turn into something like “Mr. Sunshine behind-the-scenes redux”, considering the production costs AND the intention to look for, not only A-List names of Korea for the project, but also actors from Hollywood

Everything about this looks exciting to the point you can't wait to see if they'll mess it up.

I remember DOTS so boring on paper even it has cast superstars. But this one looks too good considering the dry spell on dramaland.

i bet if they manage to cast won bin the rating will pass 40 % and will cover that big budget lol.. but at least to make up for the budget they have to cast A-list actors like Jo In Sung, Seo Ji Sub, or Gong Yoo again ( but i hope it'll be Seo Ji Sub)

I want to watch a good action drama but I really hope the script will live up to all the promises. Casting big names and high budget is not enough. I am moderately optimistic but hope for the best. Bring it on!

I love blockbusters! still gonna wait until the cast is confirmed before getting on board this drama.

but Mr.Sunshine didnt make me excited at all. and is firmly under NOT Watching list.

This blockbuster stuff isn't really my thing. For me k-drama is where I can get either a fictional romance and a slice of life lesson. But, who knows, there might be a chance to get Kang Dong-won to dramaland, and if he'll jump in, I'll do too.

I hope it's same level as IRIS or even better. Thank God, 2018 looks promising :) I'm looking forward to Mr. Sunshine, Wise Prison Life & that one from Lee Young Ae.

I have a feeling this will be offered to my fav actor. But I hope he reject this. I don't have a good feeling about this.

i pray park shin hye will be given the female lead.dramagod pls answer my prayer

Wow... I hope Jin Se Yeon can be in one for 2018 action drama. After watching her in MBC's Flower in Prison fighting scene, I was hoping for a spy thriller next. She definitely suitable for action drama...

I think the plot would be interesting if the drama plot is indeed close to the eponymous Greek mythological character. Prometheus was a titan whose name meant "looking forward". He stole fire from the gods for the powerless first humans he created, despite the fact that he would be severely punished. Eventually, his crime was revealed and he was chained onto a rock and an eagle would devor his entails and they would grow back in the day, and the torture would repeat again. Promethus is a martyr but not exactly a saint because he tried to hide his crime by tricking the Father of the Gods.

Kim Jung-un is sure an inspiration. The title though, anyone remember that sci-fi movie with the same title? Thought so. I'm afraid any coherent storytelling would go out the window when they spend all of their resources to flashy action scenes. HMPF

Next year seems like a make up year for this year's lackluster dramas.

When kbs promises a film and spends this much it has to be good. My only problem is that this film might air in 2019 or late 2018. Kbs always air films late or months from their original air date.

If my Kdw gets this offered, I will watch it. And cherish it. And probably boycott KBS in years to come since k-dramas never live up to hype.

But my KDW has been drama-free for 15 years, so I'm not worried much :D

I hope this is the next Lee Joon Gi’s project.

The gist seems cliche. I hope they do something different, or at least even if it cliche try to make it interesting and not boring. Since the production cost will be so high its heartbreaking if the result is not like what was expected.