Also known as Evergreen, this drama tells the story of a successful man who's an IT engineer and cafe owner, and a female police officer. The man plays "cupid" for couples by using a magical pollen, but his life gets complicated when the pollen causes him to fall in love with the police officer.

Also known as Evergreen, this drama tells the story of a successful man who's an IT engineer and cafe owner, and a female police officer. The man plays "cupid" for couples by using a magical pollen, but his life gets complicated when the pollen causes him to fall in love with the police officer. 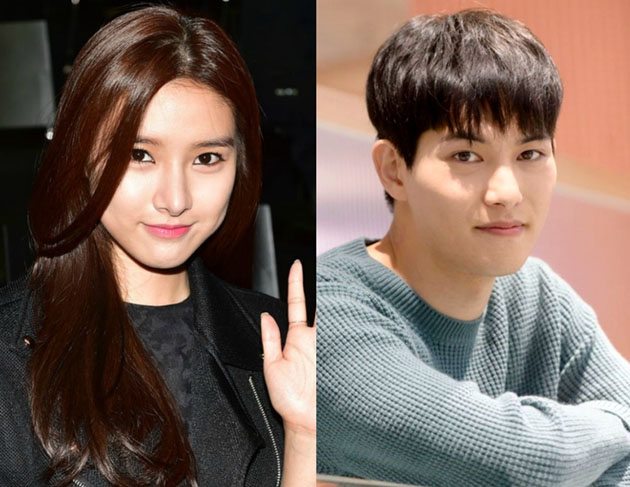 Casting is finalized for OCN’s fantasy-romance drama That Man Oh-soo, and the two leads who’d been offered the drama earlier have now signed on officially: Kim So-eun (Our Gap-soon) and Lee Jong-hyun (Lingerie Girls’ Generation).

The drama purports to tell a realistic love story of twentysomething young people, while also displaying a sensitive fantasy romance bent. Lee Jong-hyun plays Oh-soo in his first drama leading man role, and he’s certainly an interesting character: Oh-soo is not only a promising expert in the IT field and cafe owner-barista, he also possesses a mysterious magical pollen that moves people’s hearts, making him a Cupid figure for young lovers. It’s through that magic dust that he falls into a “fateful love” with our heroine. Oh, I really hope it’s by mistake—all the better to watch him deal with being caught by his own powers!

Kim So-eun plays Yuri, a young woman with a positive mindset and confident personality who works as a district police officer. Raised by a single mother, her childhood lacked in a number of ways, but she works hard with a good attitude about supporting her family all on her own. She considers charming men with good looks and bad personalities who date around constantly to be the worst. Gee, I wonder where we’d find someone like that lying around…

The drama has also signed on a director and writer, but as they appear to be newcomers, we can’t glean any clues from that. It sounds like a cute setup with a whimsical bent, and while I’d be warier with a lesser cast, I do really love Kim So-eun playing bright and energetic characters, and I have generally neutral-to-warm feelings about Lee Jong-hyun. Fingers are crossed!

That Man Oh-soo will be entirely pre-produced and has nearly completed its scriptwriting stage. It will begin filming in December and plans to air on OCN in March as a Monday-Tuesday drama.

When WGM Bride meets WGM Groom in another fantasy-romance drama. Shall I start to chants? LMAO

Heol~~~ I thought they will join the force to promote drama.. No? lol

Maybe they will join forces but still won't let go their own ships.. LOL 😆 Possibly, there will be a new ship for these two as well I guess. Shippers are everywhere.

in your dream! shipper is promoting individual project. new shippers? I guess they are individual fans who always jump to ship?

Their respective "spouses" already had two projects together. So, if anything, this is gonna be a cute thing for all the fans.

Lee Jong-hyun's first leading man role? Isn't he the leading man in My Only Love Song? I stand to be corrected though.

No, you're definitely right. That was released on Netflix, though, so maybe that's counted differently.

Ah yes! That must be the reason.

I enjoyed 'my only love song', such a fun drama :D

It is! It is!!! It's funny, easy-to-watch and the main otp's chemistry is on point, though the story is cliche and has a lot of plot holes it was a very fun ride.

Mannn I loved Lee Jonghyun in Girls' Generation 1979, his character really tugged at my heartstrings and he played it soooo well. I'm glad he's finally getting a leading role.

A cheerful, positive character is so basic but Kim Soeun has the ability to make basic characters likeable, I trust her!

I'll be waiting for this one since the premise seems pretty great and I love the cast. Hopefully the director and writer will be good as well.

LOL. 😆 I wonder if it gets to do with her backstory, maybe her father is sooo good looking and womanizer, who end up leave her mother?

Anyway, more So-eun is better for my kdrama life. Hope she appears in other drama next year too, since this is set to air early of next year (sageuk, please!) or otherwise I would end up keep re-watching her old sageuks. I have no doubt she and Lee Jong-hyun will be great together as well.

I'm so happy for So Eun 'cause she has a new project, and a short one, not those 50-episode weekend drama. But I have to admit I'm a little disappointed that her new is still in that bubbly positive character tropes. I hope she has the chance to challenge herself in something new.

Have you watch her web-drama with Lee Won Geun. I do think she could play a foxy, sassy role like the twin of the lead girl in that show.

Well at least this is just 16 epi drama, so even if it's not so good, at least bearable than some not so good long drama.

I watched that webdrama, I agree she could do more, but somehow the image of nice girl with all positive attitude has been attached with her image from BOF days. I can see she is working hard to change that perception though but it's not easy. Finger cross to see her playing a psycopath killer with an innocent smile, or maybe dual personality heroine in her future projects 😊

both are so pretty.......
i will watch this drama just to stare at them for a full hour..

I guess Lee Jong-hyun is my idol bias. I didn't even know he was an idol when I was first saw him in "Orange Marmalade." Charming performance during both the modern/Joseon.
I was sure that Yeo Jin-goo would leave him in the dust since he was a newbie back then but he did fine.

If he concentrate on acting or even take acting classes in between his band time and dramas then I think he has a good shot at being a reliable leading man in the "far" future.

Kim So-eun <3. Fell in love with her performance in her first sageuk "The Iron Empress." Love her also in "He Who Can't Marry" and I still love her even with the lack of quality projects.

This sounds like a perfect show for early spring. Looking forward to it even with new writers and director.

I have a small hope to see Yoo Ah-in & Kim So-eun reunite in any project, but I guess it's almost impossible since they are in different league now. I loved their interactions in He Who Can't Marry.

Kim So-eun's first sageuk appearance was actually Police Chosun season 1 /2 don't remember, but it was just a special appearance. Wish she was more active when she was a lot younger, but she probably chose to focus more on school.

I totally forgot about her in "Chosun Police." It's been like 10yrs ago? lol.
Oh and our beautiful banker Kim Moo-yeol was in it too.
I prefer Kim Moo-yeol over Yoo Ah-in to be honest. I'm probably the only one who doesn't worship the ground he walks on.

She stood out in "Iron Empress" and that's why I always thought that it was her first sageuk.
Thanks for the correction :).

Agree that she stood out in Iron Empress, still one of my fav project of hers.For rookie actors, if they can hold on their own acting alongside veterans, that's enough to make us believe they can act. I think she did a right a decision to take a slow path in her career and acted with many veterans during her early of career, it's just we are not very patient to wait for her success.

I'm probably the only one who doesn't worship the ground he walks on.

I don't think you are the only one. I love Yoo Ah-in but Kim Moo-yeol is more fantastic and versatile. YAI is one of my top leading actors for drama, but in movies there are many more top actors. Imo, he stand out more because he has eyes for good projects which can make his acting shine. His agency is so good as well.

Thank you for your comment. It made me happy. Jonghyun and all cnblue take acting classes and jonghyun acted in his first short movie before debut(2009) together with kang min hyuk (Dr kwak of hospital ship). Watch "girls generation 1979" and "my only love song" too. Jonghyun's acting was satisfying there.
Sorry for shameless promotion but please watch "the package" that is airing now. Jung yong hwa of cnblue is showing his best acting of his carrier 😊

I'm glad to hear that they are taking acting lessons.
I'll check out "girls generation 1979" when I'm in the mood for high school dramas.
Thanks for the suggestions.

What ever happen to his drama with Lee Yu-bi?

Girls Generation 1979 is really great ! A nice nostalig drama and the OST is great too ! It's a short drama and the actors are young but very good.

Give Kim So Eun a plucky tomboyish personality and I'm in!! I find that she's best when she's portraying someone plucky, bright, and goes all out <3

This is an okay pairing, but am I the only one who's still wishing for her long overdue reunion with Kim Bum?

No, I also wish the same too