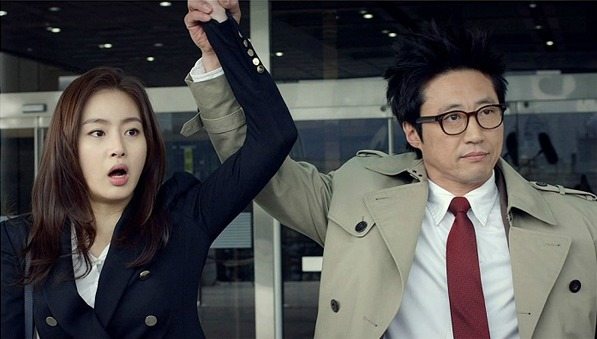 It’s been over a year since we first heard that KBS was making a second season of its hit underdog-lawyer drama Neighborhood Lawyer Jo Deul-ho, but we’re finally hearing more news about the plans, which include the possibility of Oh Hae-young Again director Song Hyun-wook coming onboard the project.

KBS is aiming to launch the second season early next year, though no concrete scheduling plans have been decided, and will naturally have to bring back Park Shin-yang in the title role (now there’s a character you just couldn’t replicate in a different actor!). It does not appear that Kang So-ra, however, will be returning to play Jo Deul-ho’s junior associate (and part-time Subway worker—yes, seriously, because who said lawyering paid the bills?), according to one outlet.

(I suppose still there’s a tiny chance she could return, since she’s currently starring in PD Song’s newest drama, Revolutionary Love, and maybe he’d like to work with her again. But frankly her character was reduced to such background stuff in the first season that I don’t think it would be worth her time, unless they paired her narratively and possibly romantically with Ryu Soo-young, the frenemy prosecutor.)

The first season of Neighborhood Laywer Jo Deul-ho, which was was based on a webtoon of the same name, starred Park Shin-yang as a hotshot prosecutor who is set up to take a fall, loses his position, and then comes back as a lawyer fighting for the rights of the regular little people who get trampled by the bigwigs and heartless corporations of society. (In the drama, those bad guys were brought together neatly into one ubervillain corporation that seemed to be the source of all that was evil, though the plot was less of a direct David-and-Goliath fight in the webtoon.) A lot of the appeal of the show was the gratifying payback we got regularly when smart (and smartass) Jo Deul-ho bested the corporate suits and gave us vicarious righteousness thrills; that, as well as Park Shin-yang’s trademark one-man-show acting performance, helped bring in high ratings and overall praise.

The broadcaster and producers are still in talks with PD Song to direct (aside from Revolutionary Love, he also directed the newly premiered Meloholic, although that was pre-produced). Season 2 of Neighborhood Lawyer Jo Deul-ho plans to air in the first half of 2018.

I hope they try and sign on Kang Sora as well and this time redeem themselves by ensuring its a substantial role for her.

I actually enjoyed her scenes with Park Shin Yang though pity it was rather limited second half of the drama. They partnered well as mentor and mentee. Fingers crossed that PD Song can rope her in.

This PD always try to add much bgm as he can, although his bgm not great at all, use noise filter badly, bad cinematography.., the important thing is he don't know he doing bad and too confident.

A part of me hopes Kang So Ra doesn't sign on. As much as I enjoyed this show, she deserved better, a lot better. And if she didn't get the proper screen time in the first episode, I highly doubt it will happen during season 2. Hopefully the supporting cast signs on. They were so much fun to watch!!

As long as Park Shin-yang I am in, love his acting.

I seriously need season 2 of Chief Kim, with the same cast! Especially Yunho and Namgoong Min.