Three crazy guys open up a boarding house in Itaewon. Though they have no idea about how to run a business, they're desperate for it to be successful, and to use the money to finance their film project. Several woman move into the boarding house and make their lives more complicated.

Three crazy guys open up a boarding house in Itaewon. Though they have no idea about how to run a business, they're desperate for it to be successful, and to use the money to finance their film project. Several woman move into the boarding house and make their lives more complicated. 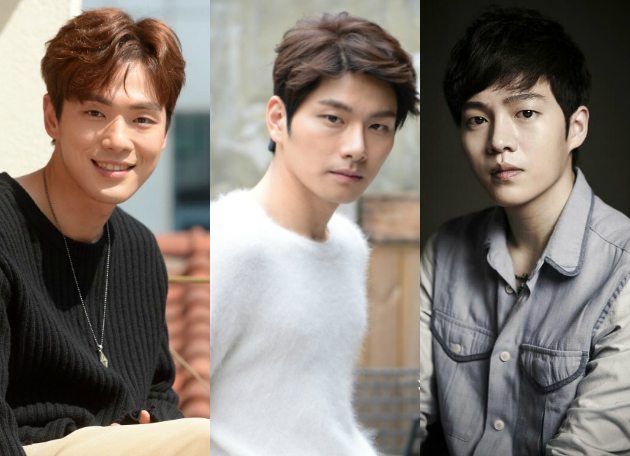 JTBC has a new youth drama on the way, and yay, School 2017’s swoony bad boy Kim Jung-hyun has signed on to headline. I adore that boy. The series is about a trio of friends just trying to get through life, and it’s called Woohoo Waikiki (the Korean title is Eurachacha Waikiki, and eurachacha is an exclamation of excitement or encouragement, like “woohoo” or “fighting”).

The drama is a laugh-out-loud comedy about three boys who are failing and flailing through life, who come to run a guesthouse called Waikiki. Kim Jung-hyun stars as “icon of misfortune Kang Dong-gu,” who dreams of becoming a movie director. He wants to be the next Bong Joon-ho, but he’s only book-smart and not very streetwise, and always ends up on the losing end because he has a soft heart. He was once a promising young director who swept the awards at short film festivals, but the film world turned out to be very harsh, and his constant stream of misfortunes has turned him cynical.

The always hilarious Lee Yi-kyung (Go Back Spouses) will play “crazy troublemaker actor Chun Joon-ki,” the shameless, cunning, but lovable friend who’s always getting the trio into some new mess. His father is a famous A-list actor, and so he dreams of following in his footsteps, but in reality he’s a glorified extra who’s barely making a subsistence living. It’s his bright idea to run a guesthouse in order to earn money to produce their own film, and convinces his two best friends of the scheme… which is where it all starts to go wrong.

The third buddy will be played by Sohn Seung-won, aka Park Eun-bin’s love interest from both seasons of Age of Youth. He plays “the fox that’s like a bear, Bong Doo-shik.” He’s an unemployed freelance writer who came up to Seoul to be a screenwriter, but ends up spending all of his time doing part-time gigs writing stuff for other people. He’s kind and mild-tempered, but also sly and quick-thinking when the situation calls for it.

The drama is about their comical adventures as they start running this guesthouse together, where a single mother and a baby will suddenly enter their lives. The drama comes from writer Kim Ki-ho of the wacky bromance comedy Modern Farmer (and sitcoms like Blue Tower, Hello Franceska, and Nonstop before that), and PD Lee Chang-min of Man to Man and Remember–Son’s War. I love this cast of three up-and-comers, who have all managed to showcase comedic and dramatic chops in their roles till now, and are going to be a hoot together as a group of misfits. Can’t wait.

Woohoo Waikiki is slated to follow Just Between Lovers on Mondays and Tuesdays beginning in February.

Ssong! Where are you?

And can I just say that this is one AWESOME lineup? Tae-swoon + I-already-miss-your-long-hair Dok-jae + we-all-know-you-love-her Sung-min! Counting down to February...

You know what's funny? One of the writer is called song ji eun. Don't know if that's a man or woman, but coincidence much. 😂

OH I love this! Right down to the wacky name.
While I do not have any more emotion for the K-ent industry today, I'd just like to note that this drama is going on my to-watch list already.

Wohooo that's sounds so interesting and fun, we had two seasons of a show about girls (Age Of Youth) and now it's guys time, i am excited for this.

Lee Yi Kyung was so funny in Go Back couple I laughed so much at his scenes, glad that he got this opportunity. Fighting

IKR? I am so happy for lee yi kyung. That guy made my days so much brighter haha, thanks to his role on Go Back Couple.

Is Ryu Hwayoung offered to play that single mother? If she declines, I hope they cast actress who can do comedy right -because this is lough-out-loud comedy! We need someone like Kim Seul-gi or Park Jin-joo who are effortlessly can make us laugh!

Park Jin-joo would be a great choice.

Maybe she will also be a part of this drama, if not female lead. This is from Modern Farmer's writer, so it is a possibility.

I kind of hope she accepts the offer because it be nice to see her take on a different role. Although Kim Seul Gi would be hilarious. I haven't seen her around in a while.

On the contrary I kinda hope she declines lol 😅 She seems to take longer time than the boys to accept or reject it, because she was offered this role way earlier than them. Not that I dislike her, but would love to see different faces. It has been a while Kim Seul-gi isn't in a drama too. But even she accepts, I don't mind too. These boys are enough reason for me to watch this.

Hmm..well she only just recently finished Mad Dog so who knows. Either way the story sounds interesting enough to give it a watch.

I've read some news that Ryu Hwa-young is in talks for the lead girl...

Although if they cast Park Eun-bin and her love interest is not Sohn Seung-won, I would really appreciate an advance warning so I can properly bubble wrap the valuables in my room once more.

JTBC will receive a lot of year-end "awards" from beanies if they do that.

the plot sounds good and if it's well directed... it's going to be success, I think. I will definitely try this.

Kim Junghyun in a Age of Youth-meets-Hogu's Love plot? Count me in!

They basically casted every guy I've finished a drama and thought "hmm, I wish I could see more of him" I only seen Kim Jung Hyun in School, but the others, it's been quite a while with their careers (I think I've seen everything Sohn Seung Won has been in, INCLUDING the daily drama lol) so bring on the bromance, cuz that's my style!

IKR? The synopsis already has me laughing( 'King of Misfortune ' is just so inspired!). And the line-up....looking forward!

It'll be funny if they use the Belle Epoque sharehouse for the drama location and just change the sign to Waikiki. XD

Lol ^_^.
Maybe they can cast Kim Won Hae as the landlord 😁

Yes! We then need a Kim Min-seok cameo as a carpenter they hire to make chairs for the furnished rooms.

What? Why Kim Won Hae and Kim Min-seok???

This sounds great and no-one is playing a robot!

One robot show is enough for sure!

I know. I'm quite enjoying I'm not a Robot but now there's two more!

This sounds like my kind of wacky slice of life. I can imagine the trio having to babysit at some point and being completely useless.

Reminds me if One Mom Three Dads 2008. LOL. It would be so hilarious!

Ooh this drama seems fun! It would be great to have a truly LOL drama with lots of humor and heart among all the thrillers and romance dramas I've been watching.

Okay. I AM SO HERE FOR THIS. Bromance galore, bring ittttt.

Ohhh I love wacky hijinks! This could be fun. Plus I love these three, and this premise is everything. I wonder if they'll do an almost serialized sort of storytelling with the guests?

Thank you Girlfriday for such good news :) , Tae Swoon is coming back with a funny character :) !

Is there any way to like this news? I would have if I could. I loved modern farmer, it's absolutely laugh out loud level hilarious. Plus three pabos together, would already light up the screen I can totally picture that. Just as long as there's no love triangle we're all good haha.

so it is Three Me... Three Handsome lads and a baby?

*fallsoverlaughing* I can't wait for this one. About time we saw some handsome-lads-meet-baby hijinks in dramaland.

I'M SO EXCITED WHERE DID THIS CASTING EVEN COME FROM AOIFJSDF

I've always wanted to see Kim Junghyun in a comedy because I've noticed in his previous works that he has a good comedic timing. So this is really a good news. I'm already sure that he would do well with his character. And this is kinda off topic but just wanna share.. Since I'm a fan of both Kim Junghyun and Woo Dohwan, I just noticed that the female leads that Woo Dohwan has worked with are now working with Kim Junghyun next. First, Seo Yeji. Then next is Ryu Hwayoung. (That's if she accepts this role). How about Sejeong with Woo Dohwan for their next project? :)

Yes for sejeong with Woo Dohwan

I'm so pumped about Lee Yi-kyung being in another drama - love him!

I'm all over this casting.

YAAAAAAASSSSSSS!!!!!! WHICH DRAMA GOD BESTOWED THIS?!?!

Petition for all beanies to call kim jung hyun tae-swoon no matter what role he plays.

Seung-won not going to the Army this year? Heard some rumor he will....

Wooohoooooo... such a nice line-up. I can't wait.

This is a super line up! wohoooooo~

OMG. This sounds riiight up my alley. Love all of them! Can't wait :)

I love all of them 😘 can’t wait

I definitely in for the cast only

eeeeeh! thank you drama gods for this christmas present!

Is this a drama or a sitcom?

is this bromance genre? if so.. woohoo finally! Can hardly wait for this! i hope this doesn't disappoint me

Is it just me or does anyone else also think that Sohn Seung won looks like Kim Min jae?

l love the cast! plus it's a drama about friendship too! so excited for the bromance!! woohooo!