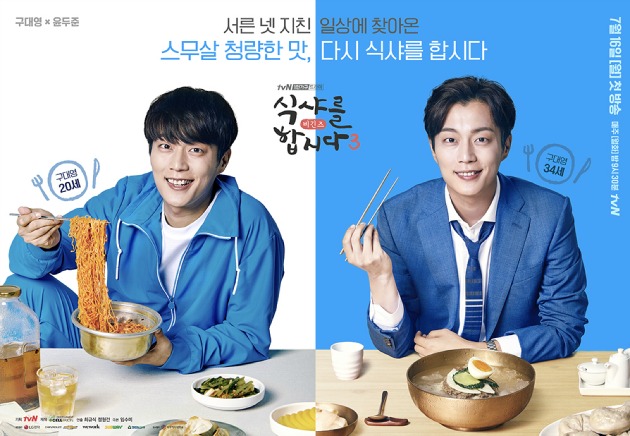 Reasons to watch: Woohoo, our favorite dramaland foodie is back with new treats, a new story, and a new girl—hey, it wouldn’t be Gu Dae-young (Yoon Doo-joon) if he didn’t fall in love every time he moved house, right? It’s my biggest gripe about the franchise, since I get invested in the romance every season and end up mad at him at the start of the next one when he’s moved on. But they won me over with Season 2, and my hopes are high that they’ll manage to do it again this time around.

At least this love interest is technically old-new? Baek Jin-hee co-stars as his college sweetheart who inspired him to become the food-obsessed person he is today, and they’ll reunite twelve years later when Dae-young is going through a career slump and in desperate need of a recharge. She’ll kickstart memories of a twenty-year-old Dae-young bumbling through life and discovering his love of food—through her—and we’ll get to see his goofy friends and their childish antics, which already sounds like the best parts of Let’s Eat and Drinking Solo combined. I’m eager to see how the PD-writer team will close out Dae-young’s story five years after it first began, and crossing all fingers and toes for a satisfying conclusion. Well, presuming that they don’t follow it up next year with Let’s Eat 4: There’s Always Room for Dessert. You know they will.

It's time. Bring out the elastic waste bands!

SPOILER - You all will be shocked.
I can say Let's eat 2 Is ruined for many viewers now.
Afterall, New season means hero needs to romance with a new girl.

It was shocking, but I adore the show already! I can get over it.

Spoiler***
Becoming a Let's Eat heroine is similar to getting a World Cup. You will be doomed in the next.

I deeply apologize. Legitimately.
I hate being spoiled.

No, no, I searched out the spoiler myself on Twitter, it wasn't on DB (as far as I know). I like being spoiled. 😀

Unfortunately, Doojoon is going in to Army soon. This was probably his last drama before going in. So we have to wait 2-3 years for Season 4.

It's enough time, considering that the one season to another almost take long time.

I liked one and two. (I tell myself that season one and two leads/ his past loves dumped him. It helps me work up a little sympathy for him and is a balm to my woman's heart.) So I'm ready for 3.

I don’t even want to think about a 4th season possibility right now. Doojoon is planning to enlist after this drama ends. T.T I hope this drama turns out great. It would be a good way to send him off.

5 Eries be the Light

I won't watch it in the night, it's ruin my diet. lol
Another season? yes, but please wait Doojoon from millitary.

Thanks for your Premiere Watch for LET'S EAT 3, girlfriday. I like the idea of a prequel.

I've watched the first episode uncooked raw, and was pleasantly surprised to see mysterious rooftop dweller Lee Joo-seung tucking into food, glorious food with Dae-young. Seo Hyun-jin is listed in AsianWiki as having a cameo, too. From what I can see, the show is off to a good start. I'll be sticking around for the whole enchilada. ;-)

Update after watching ep. 1 with subtitles:

I loved it. It's quirky, and stuffed to the gills with delectable dishes that I probably could not eat in real life owing to the shellfish ingredients. Who would have guessed that Gu Dae-young would first have waxed poetic over vending machine coffee?!

I am officially settled in.

After checking out the 1st eps, it seems like the show is off to a good (and nostalgic) start. I'm hopeful that it's going to be as enjoyable as the first 2 season. Also, it's a pleasant surprise to see Lee Joo-woo here after her memorable role in Waikiki.

Ahhh I am so excited for this!! Hope it is subbed and I can watch it after work today.

My stomach is ready for you, show! I've been practicing with kbbq and late ramen nights. Fight me!

You been snacking on kbbq and ramen all by your lonesome? Where is the love? Think I'm going to have this for breakfast now...

Kbbq is a meal to be eaten with friends and family! I currently have some relatives over, so we've been eating out a lot (I sneak the kbbq in on occasion). As for the ramen, on midnight drama binges, I'll make a bowl of ramen for myself (which is so bad for my health I MUST stop).

I see I'm not the only one who likes snacking on ramen while watching my dramas. Because I want you to live a long healthy life, pls stop snacking ramen at midnight! This advice also applies to me, Amen 🙏

Ahhhh... Dudu is back! But well, I won't watch this drama in the middle of the night, because it will makes me sleepless because I want all the foods he eats! :)

Yayyyy!!! He's back. ❤️
I'm waiting for my lunch break so that I can watch and eat simultaneously otherwise I'll kept on eating more and more like a glutton watching it.😂😂😂

I am excited to see what funny antics Gu Dae-young and his motley crew (he seems to attract all kinds 😆😉) will get up to this time round.

I didn't watch season 1 and and 2 but decided to give season 3 a try. Pleasantly surprised at how much I enjoyed episode 1. It somewhat gives a Reply 1997 vibe! Can't wait to see the story unfold for Dae-Young and his group of mischievous college friends!

Same here. I didn't watch season 1+2, but somehow feel like giving season 3 a try, and I'm liking it so far.

Sameee. I am halfeay through ep 1 and it is giving me strong Go Back Couple vibes. Probably the college campus is same too. I am liking it except the food part surprisingly.

It just popped up on Drama Fever and I was hesitating to start but the posters here seem enthused. I don't think they'd be quite as happy to see "Pretty Noona Who Buys Me Food 2"

But i dont like the new hairstyle for goo dae young.

I LOVED season 2 mainly because I found the heroine (Baek Soo Ji) so lovable and relatable. I was happy to learn that they were bringing Baek Soo Ji back for a brief appearance in season 3. While I accept that they aren't going to be together in season 3, I found her story in S3 to be very upsetting. Without leaving any spoilers for anyone, the way they wrote her off was very lazy and disappointing. I expected so much more from a show that had so much heart and gave me so much hope in S2. With that being said, I won't be following S3.