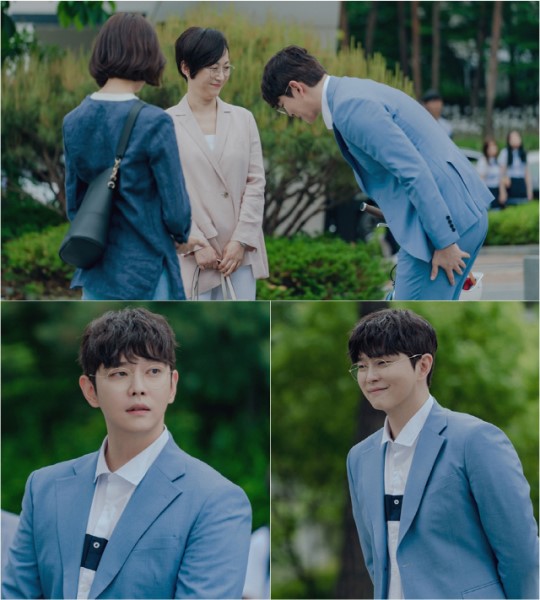 New stills have been released for OCN’s upcoming mystery-thriller Class of Lies, featuring Yoon Kyun-sang (Clean With Passion For Now) and Geum Sae-rok (The Fiery Priest).

The story is set in a prestigious private high school where a mysterious murder has taken place. At the front line of the investigations is Yoon Kyun-sang’s character – a lawyer fallen from grace named Ki Moo-hyuk – who is determined to uncover the truth and restore his reputation. In order to gain access to the school grounds and dig deeper for clues, he uses an alias to conceal his real identity and accepts a temporary teaching position at the elite school.

In the newly released stills of Yoon Kyun-sang, we see him smartly dressed in a blue suit and he seems to be in good spirits. He is also pictured greeting a woman in a polite bow, and she smiles warmly at him in return. 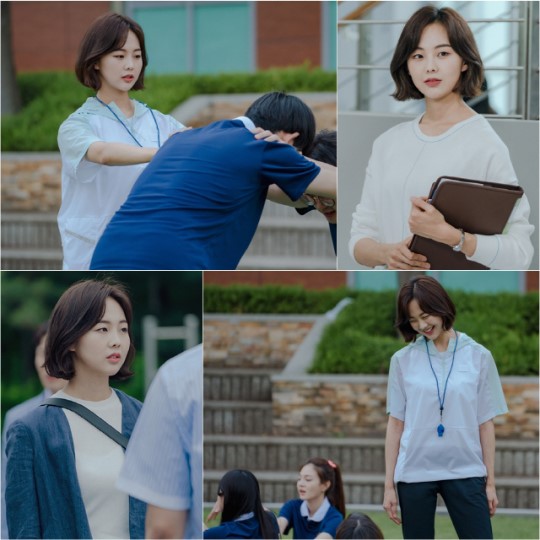 The second set of stills are of Geum Sae-rok who plays phys-ed teacher Ha So-hyun. She is passionate about teaching and loves her students both unabashedly and without question. However, as she becomes more involved in Yoon Kyun-sang’s investigations, she’s faced with unpleasant realities about her students at the school that conflict with her idealistic views.

In the photos, we see Geum Sae-rok dressed in blue as well, but her attire is more casual and fitting to her profession. And she appears to be enjoying herself as she coaches the students in gym class outdoors.

My crush on Yoon Kyung Sang knows no bounds. He's so adorable and sweet with his quiet 4d personality and his love for cats. Hoping this drama is good.

I second this very strongly. There is no end to my love for Kyun-sang.

This is my first time hearing about Geum Sae Rok. Is she any good?

I only know she was adorable in Fiery Priest haha idk bout how she'll handle a more serious role...but I suppose the casting director saw some potential in her :) She did great with her action scenes as well 8D

She's a rookie actress with a lot of potential. She's been getting supporting roles in movies like The Last Princess, The King and Believer.

In Marry Me Now/Shall We Live Together and The Fiery Priest, she played characters with strong personnalities. So, it seems like she'll be great as a P.E teacher.

that is insanely far away wtf. she is beautiful! i am literally just finishing up with rebel thief and i'm in love with him. also he is so GIGANTIC. hope this drama is good. my fav type of investigations are when they outsmart people constantly lmao so i'm hoping the both of them use their galaxy brain.

I'm so excited to see Geum Sae Rok in the main cast!

There are also snippets released by OCN showing the dualities of YKS character and the students. All looks promising. Looking forward to more updates approaching it's airing.

The good news is that OCN's CLASS OF LIES is now on Viki"s "COMING SOON' list under the title: MR. TEMPORARY.
I would not put high school drama as a favorite genre but when it intersects with my number one favorite genre crime/mystery then I am in.
I enjoyed A BEAUTIFUL WORLD and SOLOMON'S PERJURY.
WHITE CHRISTMAS is in a "class" of its own.
All three are excellent dramas.