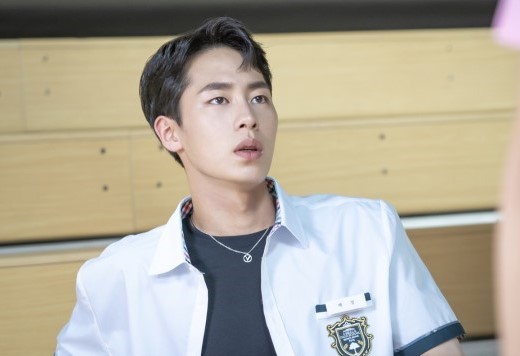 The story of A Day Found by Chance is centered around the character of Eun Dan-oh, played by Kim Hye-yoon (SKY Castle). She thought she was living just a regular life, but, as it turned out, she wasn’t even real. Her whole life was part of a comic book story and she was just one character in it. Finding out this new truth, she decides to take her life into her own hands, refusing to follow the life plan that’s been set out for her, and sets off to find the true love of her choosing. 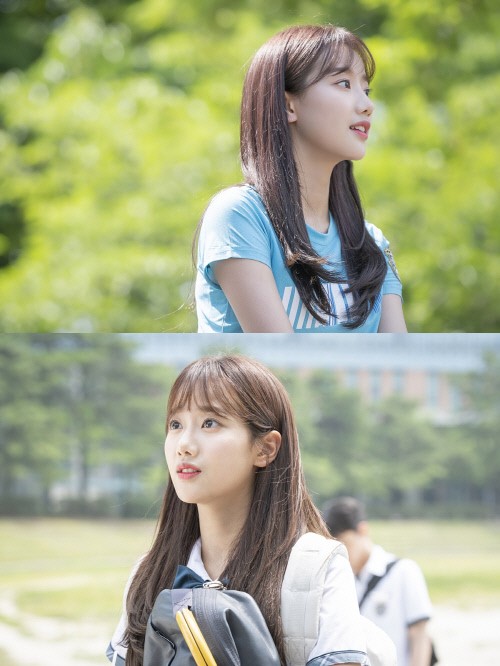 In this story within a story, Lee Na-eun plays the role of Yeo Joo-da. She comes from a struggling family and has worked in all sorts of part-time jobs. Although she attends school with many privileged students, she doesn’t let it affect her spirits. She has a sweet and sunny personality, always staying positive, and is a Candy-like character which is fitting because she is the “main character” in the comic book. In following, and a big part of the comic book’s story line, is the love triangle in which she is caught in-between two boys fighting for her affections (paralleling Boys Over Flowers and the like). However, when Eun Dan-oh develops self-awareness, her life is thrown off course as well. 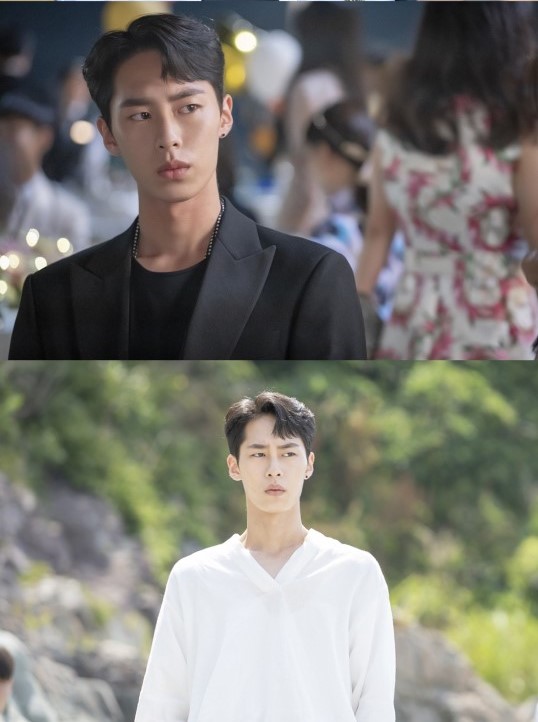 Lee Jae-wook plays Baek Kyung, Eun Dan-oh’s fiancé, whom Dan-oh has been crushing on for 10 years. The character is a typical “bad boy”, appearing to be cold and uninterested. However, he is hiding a painful past and is not unaffected by Dan-oh’s presence in his life. As Dan-oh’s life takes a turn, he gets caught in the whirlwind with her, and their relationship as well as his feelings for her become more complicated. 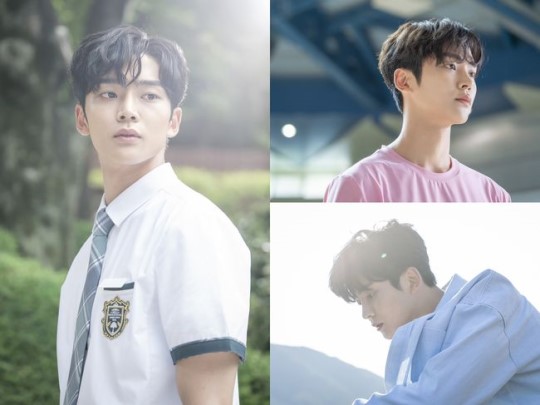 The character Kim Ro-woon plays is “Number 13”, a nameless extra in the comic book’s story. Called “Number 13” because he’s the 13th person on the class attendance list, he lived a background existence until he met Eun Dan-oh and fell in love. With her help, he also becomes self-aware about his identity, and starts to grow and change as a character and person.

Directing for the drama is PD Kim Sang-hyub (The King Loves); and writers, In Ji-hye and Song Ha-young, will be working on the scripts together.

I laughed when I saw Lee Jae-wook’s photos because he seems to be channeling his past role within a role on Search Query: WWW. But I know I’m not alone when I say that I loved him in that drama and I’m excited to see him in another show so soon. Hopefully September comes fasts!

MBC’s fantasy youth romance A Day Found by Chance is currently being planned to air in September.

So, this will be "W" with a female lead?

I actually loved W. Probably in my top 5 dramas of all time.

Yeah, me too. I don't get all the hate. I'm actually mad I let other Beanies influence my decision to watch it. I just watched this year and I loved it.

I watched it earlier this year as well! I was uncertain about watching it when I first started because of the weight of the opinions against. Once I started though, I found that it was easily the most enthralling drama I've watched yet. I couldn't stop watching and finished it within 3 days (which, in retrospect, was a stupid idea, since I skipped classes to watch it). I have little nitpicks with it, but I honestly do not get why people dislike it or why people feel/felt let down by it or why people think it started off great but went down hill.

@thatstp and @smaltwalt, by the end it didn't make sense. The rules the writer had establish were flung to the far reaches of the earth and new rules were made up. For me it completely disrupted the flow of the drama because it was an about face. If I remember correctly, that is why most of us were upset. "Make it make sense" as they say, lol. I hope that explains the angst associated with the drama.

I don't think it stopped making sense. The rules of the universe were a moving target throughout the drama. There was never any settled account of what was and wasn't permissible, and I think that was at least part of the point. At its core, W was all about a comic book universe that defied easy nomological characterization, and there was significant fuzziness and inexplicability surrounding Kang Cheol and his relationship with the "real world" from the very beginning.

Totally agree. It never stopped making sense. As you said it was an evolving world, the rules weren't broken just ever-changing.

Overall, I hope, without the "killing" part and the "finding the culprit".

I only see Lee Jae wook all around.... let him have sufficient screen time ... (at least till I change my ships !)

On the other hand, this drama is totally W X candy female lead X makjang.

Lee Jae-wook looks amazing,sad he isin't the lead guy(still can't move on from his Search char)...Really hope the story will be as original as W...

I haven't watched a high school drama since Orange Marmalade (I know, I know) but this sounds good enough to watch!

I laughed when I saw Lee Jae Wook's photo up top and said, "tccolb knows how to bring the Beanies to the yard!"

I am looking forward to see this show get recapped here on DB and have our Puppy as the thumbnail. HAHAHA

What a good idea, I hope that happens!

This sounds super different and interesting! I loved Lee Jae-wook in Search: WWW and was hoping to see him in more roles, and thankfully I didn't have to wait long! But based on comments he isn't the main character? Sadness.

Lee Jae Wook is a awesome actor that brings a lot of versatility to every role. No doubt his next role will be filled with surprises as his characters are always never want they initially appear to be.

finally Rowoon get a lead role, yeay!
people still underestimate his visual, his singing, and his acting, hope he can be more popular with this drama

I love the webtoon and look forward to the drama adaptation. I'm especially excited to see Lee Jae Wook again although I'm a bit disappointed that he's the second lead. Honestly, I'm slightly worried about Ro-woon's performance since he's an idol. I'm not quite sure how he was in his other dramas, so hopefully he'll prove me wrong.

You're right. I agree that he's a perfect fit for Baek Kyung.

Puppy is back! Woohoo! Can't believe we already missed him!

You hear those loud noises? Yes, that's me screaming at the top of my lungs because two of my Puppies, Rowoon and Jae-wook, are in a drama together with Kim Hye-yoon.

This is kinda far from where the webtoon is going but please, have bromance. Even a last-minute bromance will do. Thanks, show.

I'm very excited for this drama!

First, I really like the casting. Kim Hye Yoon was incredible in Sky Castle. Kim Rowoon was good in his second roles and Lee Jae Wook was an adorable puppy in WWW. I like KHY and KR have the same age and LJW is just a little bit younger. I think it can help for the ambience on the set.

I am still so confused about how Lee Jae-wook is her fiancé. In the pictures, it looks like they're both in high school. Are they chaebols who got married off early? Is this some kind of contract marriage because the drama is trying to max its makjang? Also, I'm already mad at a love triangle with Jae-wook and Ro-woon. They both deserve happiness!

They are both chaebols! Their parents arranged their marriage (for some business stuff if I remember correctly).

And yes, all the characters in this webtoon err drama deserve to be happy. Especially our trio and my boy Do-hwa.

ah~ a bad boy character.
Is he gonna get hit by some random food item in the comic book?
Why a comic book? Do we need to wait a week for the next volume to be released? lol

I haven’t watched a high school drama in a while but for our dear Puppy, I’ll definitely check this out!

I saw Lee Jae Wook’s picture and thought “yay, he’s back from the military”. Fail 🤦🏾‍♀️🙈😂. When you lose your mind and can’t distinguish between facts and fiction. Clearly I loved search:www

For a split second I had the same thought. lol.

Naeun and Jae wook are really beautiful, i couldn't stop looking at their photos. I'm looking for their performances because i want them to be in this generation of actors. For the drama in general, i'm really excited, the plot/webtoon + the actors are on point. So i've big expectations.

I can't say I know anyone in this cast but that's never a bad thing. This must be the year of high school dramas. I'm adding this to my list of dramas to watch next month.

Lee Jae-wook!!!! I'm not really about high school shows but this sounds interesting...I wonder what the consequences of her self awareness will be??