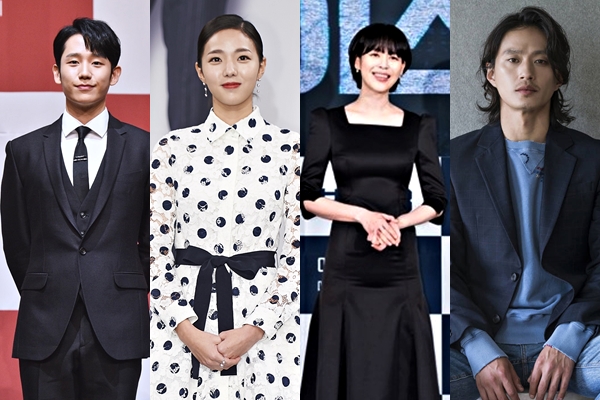 tvN has announced the main line-up for their new romance drama, Half of a Half. Jung Hae-in (One Spring Night), Chae Soo-bin (Fox Bride Star), Lee Hana (Voice 3), and Kim Sung-gyu (Kingdom) have all accepted lead roles in the upcoming drama. The plot centers around love in its various iterations. When love is unrequited, how do you live alone with that love? For one of the characters in the drama, a small piece of someone’s heart, a “half of a half” is enough to sustain love.

Jung Hae-in will be playing the male lead; his character Ha Won is an artificial intelligence engineer and an industry pioneer. He’s the founder and brains behind a successful online company. In terms of personality, he’s a good-natured and utterly rational, but he can also be unyielding at times.

Chae Soo-bin plays Han Seo-woo, a recording engineer who specializes in classical music. She’s an eternal optimist who looks on the bright side of things, despite not having steady employment, a home, a family, or really anything that would point to a stable life. Aside from her optimism, she’s just a fairly ordinary young woman. She does have one quirk though. Whenever she’s anxious, she calms herself down by solving math problems.

Kim Sung-gyu is set to play a pianist named Kang In-wook. He’s acclaimed in musical circles for his artistry and skill, but in the wider world he’s pretty much a no-name musician. Though sociable and sweet, he suffers from an anxiety that dominates his every waking moment. He worries over the smallest things and has a constant fear that he’ll lose everything.

Lee Hana will play horticulturalist Moon Soon-ho. She and Jung Hae-in’s character go way back and she’s taken care of him throughout the years, as if he were one of her gardens. She’s a bit awkward and tends to worry about her weight in way that’s a bit obsessive.

PD Lee Sang-yub (Familiar Wife, Shopping King Louis) will direct, with Lee Sook-yeon (On the Way to the Airport) penning the script. Writer Lee and Jung Hae-in have worked together before, as she was the head writer for his most recent film, Tune in for Love.

He is very handsome. That says everything 😂😂😂😂😂

The plot sounds promising,nothing wow but if done right could be a win...I confess i'm already sooo tired of the constant heroine who is bright eve when her house falls down but i guess u can't be a kdrama leading lady without 1000 optimism or i guess i'm too gloomy to understand it

Lee Ji an was a kdrama wonderful leading lady and she was totally gloomy. You can watch her in My Ajusshi, one of the best dramas ever (or maybe the best). 😍

I know,i watched My Ajusshi and loved it(i usually kinda almost watch every running show at that moment in time and pick what i love the best)... I guess i'm just tired by all the cardboard copy heroines that always are bright,smiling and all despite the world falling on them...I'm too jaded i guess to connect with it...

I feel you. I've watched lots of dramas and often thought, tsk.. if I were her, I fall into depression. What's wrong with that? But then I don't really want to watch 10+ episodes of realism either. Saw too many of that in real life already. So I gladly bask in all smiley cardboard Candies with their rainbow unicorns and cheer loudly once in a while when atypical female leads come around.

God help me, I exclaimed "the people eater!"

a small piece of someone’s heart

In a jar in the refrigerator? Whoops, wrong show :)

Chae Soo-bin plays Han Seo-woo, a recording engineer who specializes in classical music. She’s an eternal optimist who looks on the bright side of things, despite not having steady employment...

Should she switch to kpop? Or kdramas?? I hear My Country could use some help in the music area :)

I wish Jung Hae-In and Choi Jin Hyuk could switch dramas. Jung should do something other than romances and Choi is doing his third revenge drama in a row...

Chae Soo Bin I MISS YOU

Ooh looking forward to this!

My mom has missed Chae Soo-bin. She’ll be glad to know this! And with Han Jae-in, I’ll have to try watching it as well! And did someone say classical music and pianist? This will be an easy yes for me.

Yes, but hey Ally, I felt CSB's character here seems similar to her character in I am not a robot...
Understandable choice, since she can play very well these type of heroines. Optimistic no matter what.... I am glad for your mom

I just read the character descriptions and like...
Calms down by doing math problems? Musical engineer paired with rational but unyielding AI engineer? Wow I love these nerds already?
Everyone sounds really interesting and relatable off two lines.
I'd be watching for CSB anyway but I actually like the sound of it too. Bonus.

Maybe they fall in love over a math problem.

Will Jung Haein ever star in a drama or film with no romance at all? 😂

I think his next film won't have romance (but he's not the lead).

"tends to worry about her weight"

so either she has an ED or it's the typical k-drama fair. the first option would be good if done correctly. the second, if it isn't a commentary on misogyny and fat / body shame, would be annoying.

i miss chae soo bin for sure too. my queen....sorry i couldnt stick with fox bride star lol

still traumatised from her king of high school days? 😂😂

Very much so! And, a couple of dramas that came before. 😁

i’m so excited for this pairing! i’m a bit worried because the plot sounds interesting on paper but it really does depend on it’s execution, can’t believe this whole year went by without Chae Soo-bin on my screen, she’s one of my favourite actresses so i hope this character brings out the best in her

It's so sad to see someone working like that and people being like "she needs to go away" when she's actually good at acting and no one says anything like that about Yeo Jin Gu having 3 dramas in a year for 2019. Double standards.....

Lowkey excited coz scriptwriter wrote my favorite kdrama, though I'm not really interesting in the plot now...

Can't wait to watch Tune in for Love though!

Me too! It will be on Netflix the 5th November \o/

It's so nice to see positive comments about Chae Soo Bin, who is an actually talented actress that really worked her way up from supporting roles.

On some other drama sites, people just take out the knives against any actress under 30 who isn't an idol, even when they actually are good at acting and have consistent performances and successful dramas (the only actress they leave alone is Kim Tae Ri, because going after her is too absurd). Glad to see that's not the case here.

Kim Tae ri has been in only two dramas, and apparently she is no kpop idol. I have seen her only in Mr. Sunshine, and I loved her. But I wouldn't be able to judge her for her acting... for her role in mr. Sunshine, I feel she was great...

I agree. Aside from working her way up, she has been fairly good in picking her roles and does well in drama, comedy, and even as a villain. It's so nice to read positive comments about CSB's casting, which are totally deserved. I've gone through several casting announcements with comments ranging from she's not leading lady material to those that say that she's selfish in getting herself cast one drama after next.

It's quite tough being an under 30 actress, except if you are one of the 3 Kims (Sohyun, Yoojung, and Saeron) as there are idol actresses that are now no longer promoting as much idols and are thus being slotted into dramas. I don't really mind as long as they're talented. However, for those that are not, I'd rather that the roles go to the likes of CSB, Kang Sora, Jo Boah, Gong Seung Yeon.

OMG! I cant wait for these drama to air, i have to watch this! 😍😍 I love Chae So Bin in her role in "Im not a Robot" and her acting is impeccable. And my ever idol Jung Hae In...no words can express my excitement..crazy over him ever! 😊 well, what can i say..its your time to shine idol. Finally, you are paired with someone younger in a tv series. Congratulations and goodluck to all the cast! 😍😘

Same reaction here. Which was...Thank goodness he’s FINALLY cast with a younger actress!! I still have PTSD over Something in the Rain. 😭

Oh . I dont know if I want to watch somebody having paralyzing anxiety. Hits too close. But it can be also comforting in a way perhaps? And certainly needs to be addressed.
Pretty scientific set of charCters

Wow, OTW to the Airport was total boring. I smell the same installment here, with too many philosophy lessons

On the other hand,I totally love it! Not your cup of tea, I guess.

The occupations of the characters all sound interesting.

And I'm glad to see this writer and PD combo.
SKL was lighthearted and OTWTTA was introspective and a bit melo. But I enjoyed it a great deal. Any work from the writer will catch my interest.

Excited because of the casts and writer ( i love OTWTTA)

Chae Soo bin and jung Hae in, Lee Hana they are lovely and nice people

Thanks for this casting news on HALF OF A HALF, @stroopwafel.

I'm tuning in for PD Lee Sang-yeob, who co-directed THE KING'S DAUGHTER, SOO BAEK HYANG. The cinematography was gorgeous, and the ensemble cast outstanding. I loved Chae Soo-bin's performance opposite Yoon Kyun-sang in REBEL: THIEF WHO STOLE THE PEOPLE -- which was written by the author of TKDSBH. It will be fun to see her as a recording engineer. The only other shows I've seen her in: LOVE IN THE MOONLIGHT and HOUSE OF BLUEBIRD, both of which I enjoyed.